Where is the Immigration Secretary going? He doesn't know ... Q and A and Lateline to clash ... how to fix leaks with an esky ...

Secrets and estimates. It’s the first week of Senate estimates for the year, which means that we are treated to facts and figures from top-level public servants, as well as exchanges like this between Mike Pezzullo, secretary of the Department of Immigration and Border Protection, and Senator Kim Carr before the Legal and Constitutional Affairs Committee. As the committee adjourned this morning, committee deputy chair Ian Macdonald attempted to determine when Pezzullo would be available to return to the hearing. Pezzullo wasn’t being too forthcoming on why he wouldn’t be attending or where he was going, only saying he was “going to an event” with the Prime Minister. Pezzullo, ever cagey, wouldn’t say what the event was about, leading Macdonald to ask him to bring back a press release. Carr then asked how long Pezzullo would be away:

Carr: Mr Pezzullo, can we have an indication of how long you’re likely to be absent?

Pezzullo: I believe it’s off site, Senator, I’ll walk out of here, someone will bundle me into a car, I don’t know where I’m going.

Pezzullo: I don’t know at this stage, I haven’t focused on my diary.

Carr: …except it’s on the front page of The Australian..

Of course, that’s where the best secrets are.

Here to help. Prime Minister Tony Abbott swapped buzzwords this morning, from “strong” to “safe”, as he addressed the country on national security. His new tough line will be a hard one for Opposition Leader Bill Shorten to argue against, and it seems that Senator David Leyonhjelm has no faith that he’s up to the job, sending out this press release this morning:

“With Bill Shorten unlikely to say anything substantive about national security today, or perhaps, ever, Senator Leyonhjelm will temporarily take over Opposition Leader duties today.”

ABC flagship programs clash. While many of us are looking forward to the return of Lateline on March 9 (only a few weeks away now!), the new 9.30 time slot on ABC24 has caused some scheduling headaches for the head honchos at the ABC — it means that Q&A will no longer be broadcast live into Western Australia, Queensland, South Australia or the Northern Territory. That means that viewers in those states will be left out of the Twitter conversation, unless they stream it online through iView. An ABC spokesperson told TV news website Nelbie the decision wasn’t reached lightly:

“It was a complex decision with competing requirements that a lot of thought went into. It is important to have consistency for viewers and for Lateline as a daily program, so going to air at the same time every night serves our audience better. The earlier timeslot is more viewer-friendly and makes the program accessible to a larger audience. It also works best for the News 24 evening line-up on all nights of the week.

“Q&A will continue to be streamed live nationally on the ABC’s iview service, so viewers in all states can still watch it live-to-air and participate in the social media conversation. People seeking live engagement with Q&A through Twitter are already digitally savvy and accustomed to accessing programming online. The iView service launched in 2008 and is extremely popular and well-used – by far the leading internet TV service in Australia – and growing. People are already taking advantage of being able to watch it this way. It will also continue to be simulcast live on ABC NewsRadio and is live-streamed through the Q&A website.  And those who don’t want to engage live can still watch it on ABC TV at the usual time.”

Choices, choices, choices. Those bright boys and girls of The Economist have spent their whole careers insisting that they know best as to how to run the world. But do they understand price signals? Here’s their latest subscription offer for readers in the United Kingdom: 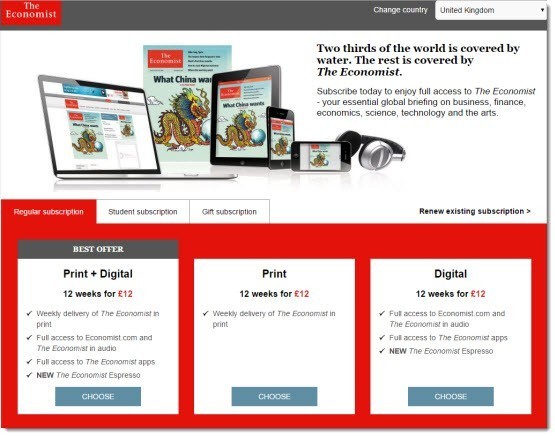 Hmmm, which to choose. Subscribe now to be this smart.

Old line for old argument. “Those with nothing to hide have nothing to fear.” That’s the claim by AFP Assistant Commissioner Tim Morris in a weekend justification of the government’s mass surveillance scheme. Morris gets no points for originality — that line has been around for so long its actual derivation is now unclear — it’s been attributed to Joseph Goebbels in 1933 and George Orwell, although the earliest reference we’ve been able to track down is actually by American writer Upton Sinclair. Presumably Morris doesn’t have any curtains on his windows and walks around naked — after all, what does he have to hide? Oh, he didn’t mean THAT sort of hiding? Doesn’t matter — Morris will still be able to use data retention to violate the privacy of anyone he likes — and not just Morris, but corporate litigants, angry ex-spouses, copyright troll law firms and the hackers who will inevitably break into data storage systems. And some of us — lawyers, journalists, doctors, just to name three professions — make an entire living based on having something to hide, and it’s entirely in the public interest that we do so, no matter what some lazy copper thinks.

Changes at Sydney airport. We hear from a tipster that Max Moore-Wilton will table his resignation from his role as chairman of the Sydney Airport board next week. Moore-Wilton has been vocal in his opposition to a second Sydney airport and has already been tipped to stand down from his role as chairman of the Southern Cross Media this week. We called the Sydney Airport media team this morning but did not hear back by deadline.

Esky leaks. What tools do you need to fix a leak? Well according to one member of the Country Liberal Party in the Northern Territory, an esky will do the job. This story has found its way to Bob Gosford, our NT correspondent:

“Word has it that immediately before the meeting said party stalwart grabbed an esky — without the ice or beer of course — and went around the meeting demanding each member present deposit their mobile phones into it for the duration of the meeting.

“Word has it that the 50 (?) or so phones that landed in the esky had all sorts of fun during their confinement and took all the opportunities available to swap information via ‘near-field communication‘, a set-up that allows the phones to talk to each other and swap information when in close proximity. Who knows what information was swapped?”

Telstra rorts again. While some of us find it a little bit distressing to look at our phone bills, a tipster has told us that it pays to have a pay close attention — especially if you have a landline handset rented through Telstra. Our tipster was helping an elderly relative with her plan, and found she was being charged for the handset. After many hours spent on hold and in Telstra stores, he found a solution:

“A few years ago I became aware that our major Telco had been slipping in a fee for ‘handset rental’ of about $3 per month. By 2014 it had risen to $6 per month. Last month I found out that this charge had risen to $9 per month or $108 pa — and this was for a 35-year-old handset that was obsolete and could not be repaired … So, instead of my dear old friend paying this fee I went down to our local Dick Smith store and bought a brand new Uniden handset for $54.95 — half the annual rental cost of a Telstra dud!”

It seems like quite a rort for Telstra to be charging people monthly fees for landline handsets considering mobile phone plans include such costs for a limited amount of time.

Storm with teeth. It’s been three days since Tropical Cyclone Marcia made landfall on the central Queensland coast near the regional city of Rockhampton, roughly 700 kilometres north of Brisbane. About 47,000 homes in the Rockhampton region are still without electricity, and many people in Rockhampton itself only had water restored this morning. This means most people in the region spent the weekend dealing with cyclone and flood damage in 34-degree heat and high humidity without being able to take a shower or recover in an air-conditioned room. Unsurprisingly tempers are fraying, and there have been reports of looting and punch-ups in the queues — some many kilometres long — for petrol, diesel, ice and other necessities. Ergon Energy has flown in hundreds of extra workers, but people in outlying areas  have been told it could take weeks to reconnect power to them. The small township of Byfield, north of Yeppoon, was the first settlement in the path of Marcia, and its residents say a visit by an ABC News crew yesterday was the first contact they’d had with the outside world since the cyclone hit — nothing from the SES, government or police.

As always, local ABC and commercial radio stations have been keeping the community informed over the airwaves and through social media. Newly elected MP Brittany Lauga’s electorate of Keppel is among the worst hit, and is home to the the Koorana Crocodile Farm, a popular tourist attraction. Lauga shared this slightly alarming message on Friday:

An apology to David Leyonhjelm

And presumably we rubes will be able to look at what Morris is looking at too?

“Max the Axe” is moving – is there another hole opening at the ABC?

– “It is difficult to get a man to understand something, when his salary depends upon his not understanding it!”

Why no acknowledgement of Dan Ariely, Ms Tips?