Can you walk your bike up a hill? Are beards over? Are we too dismissive of the rights of the differently abled? It's time to delve into the world of peak Guardian. 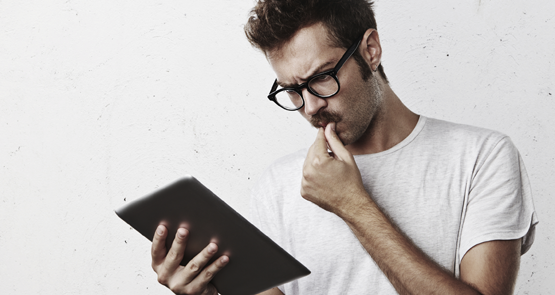 The phrase “Have we reached peak [noun]?” originates with debates over “peak oil”: a theoretical maximum point of petroleum extraction capability that, should we reach it, could lead to global economic decline.

Which brings me to “peak Guardian”. You may have noticed people deploying this arch slur when sharing Guardian stories on social media, or even in the paper’s own lively comments section.

Last August, the paper itself asked, somewhat wearily, “Have we reached peak peak?”

But what do we peak about when we peak about Guardian? What qualities are most associated with The Guardian’s editorial concerns and those of its readers — and have we, as the phrase implies, had enough? Is it the Peak-Guardianest thing to do to actually say “peak Guardian” — or, indeed, to investigate peak Guardian?

An online search reveals certain recurring tropes in alleged peak Guardian stories. While it’s a subjective epithet whose referent seems to vary depending on the political views of the person deploying it, many cited examples of peak Guardian have a first-person perspective and a fretful, confessional tone. Knowingly or unconsciously, they devote significant intellectual or emotional resources to making bold, sweeping claims regarding something that seems disproportionately quotidian.

“I thought my puppy would unite the world. I was so, so wrong”,  wrote Jason Wilson last July, in one of the more daring expeditions into the heady thin air of Peak Guardian. I laughed helplessly just now as I re-read the standfirst: “I never thought my new canine pal, a designer Goldendoodle, would drag me into a world of internet hate — and teach me valuable lessons about life.”

Another of the classics, from August, 2012, is Tess Morgan’s grief-stricken memoir “My son’s tattoo hurt me deeply”: “I have a lump in my throat that stops me from eating. I feel as if someone has died. I keep thinking of his skin, his precious skin, inked like a pig carcass.”

Personally, I feel Trevor Ward’s blog post on whether it’s OK to get off your bike and walk up a hill is both literally and generically the purest instance of peak Guardian.

Stories accused of embodying peak Guardian also focus on the pursuit of whimsical and artisanal qualities in food and drink, defer to trendy experts, fret about the existential threat modern life poses to cosy traditions, and brood resentfully about how one’s life must look to others.

While the trope is often reserved for very serious discussions of online trends and habits, personally I feel The New York Times has a much better-deserved reputation for spurious trend reportage, as captured by the hilarious Twitter account The Times Is On It.

Peak Guardian instead seems to reflect exasperation with pedantry, internecine fights with low, low stakes, and annoyance at the paper’s hypocrisy in celebrating trends and then declaring them “over” … all salted with more than a little anti-intellectualism.

As The Guardian is known for its left-wing humanism, many stories accused of representing peak Guardian consist of self-conscious hand-wringing over race, gender, class and ability privilege. A recent example: “The women suffering for your Valentine’s Day flowers: Behind the millions of imported flowers we buy every year is a mostly female workforce subjected to low pay and poor conditions”.

Peak Guardian ridicules a writer’s noble desire to wage race, gender, class and ability war on the battlefield of pop culture and everyday life. “It’s time to take a stand against the urinal”, urged Peter Ormerod this month. “The act of public urination has become a trope of hairy masculinity. Why can’t we just sit down?”

Peak Guardian also gently mocks the paper for obsessive and opportunistic attempts to fold trendy political topics into just about any other article. Here’s a magnificent correction from last year’s Oscars coverage, captured on Twitter by alert reader Maddy Potts. It’s especially rich because it also dovetails with the Grauniad’s reputation for subeditorial inaccuracy: 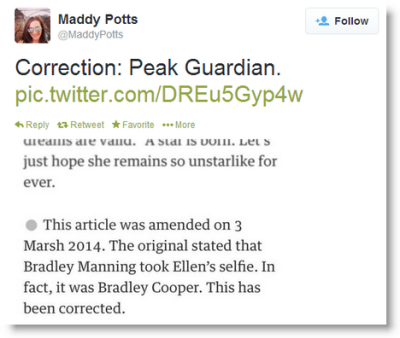 In the United States, non-profit magazine Mother Jones regularly publishes social justice journalism, as do plenty of other publications here and abroad. And the “cultural analysis turn” in opinion and lifestyle journalism probably reflects a generation of writers trying to make a living from their academic training in the humanities. Yet other publications, topics and the readers who care about them can’t be dismissed as easily as The Guardian.

Perhaps the peak Guardian trope is enabled by the paper’s historical place in British culture as the voice of the bleeding-heart bourgeoisie. For at least a century, it’s been the left-wing answer to The Times: a paper of record that was required reading for political and intellectual elites as well as the broader mercantile middle class. It’s so mockable because its editorial line is so consistent over time, and, hence, recognisable. Peak Guardian is a joke everyone gets.

Growing up in 1980s Australia, my first encounter with The Guardian was through Sue Townsend’s wonderful Adrian Mole books, where it’s a cultural lifeline to our achingly pretentious, provincial hero. Ashamed of his lower-middle-class family, he lusts after the “dead posh” Pandora Braithwaite, whose family subscribes to The Guardian, Punch, Private Eye and New Society.

At Adrian’s own home, “We take The Guardian and The Sun so I am quite an expert on the latest developments regarding ‘whale conservation’ and also the mammary development of Miss Samantha Fox.”

Later, Adrian rethinks a prospective move to London: “According to The Guardian lead pollution is sending the cockneys who live there mad.”

Once, this Guardian sensibility was encapsulated within and limited to the UK. My closest equivalent was The Age; only during my internet-enabled university research and in my earliest days as a journalist did I even read The Guardian, become familiar with its purview, and learn to consider it a reliable news source and a part of my intellectual and professional identity.

But as Scottish blogger Dom Hinde wrote in May, 2014, on pro-independence blog Better Nation, The Guardian’s international expansion may have eroded its cultural specificity by trying to stuff way too much into it.

“There used to be a relatively small range of Guardian,” Hinde recalls. But thanks to the organisation’s global expansion, in terms of both volume of content and number of international editions, “seemingly everyone is either reading or writing for the Guardian,” and therefore: “It is now possible to find a Guardian article commenting on any aspect of your life if you type in your area of interest to Google next to the word Guardian.”

Is Guardian journalism a finite resource? How large an appetite can readers reasonably be expected to show for it? But the sheer zest with which people continue to point out peak Guardian seems to indicate that it hasn’t quite peaked yet.

The Guardian v Joseph Mayton: both accuse the other of lying

Crikey, please enough filler pieces by the media about the media!!

I agree with Bob, here. In addition, as long as we are still living in a capitalist world, I exercise consumer choice and don’t bother to open the culture and life style drivel here characterized as ‘peak’. I just read news about what interests me.

ps to Crikey – this includes the totally meaningless ratings for last nights TV included within. Yikes!

Crude oil production peak was in 2006, as acknowledged by the IEA in their 2010 World Energy Outlook, and was followed by price spike & economic decline. So framing in terms of ‘will it?’/future tense is ignorant, a frequent fellow traveller of the trivial.

My main gripe with The Guardian is it seems to have more click-bait headlines than even the Daily Mail. Left Wing it may purportedly be, but very shallow it often is.

And as for Crikey’s obsession with the media and its place in it, I have complained about it several times. I have no idea why an email news-sheet with a fairly discerning audience needs to waste precious daily space on the precise numbers of the populace who watch what on broadcast television.

Crikey is 15 now: surely it is time to think about leaving adolescence behind?

Whatever your opinion of the articles and preoccupations in The Guardian Mel, you would have to agree that they lead BTL, Below the Line. I liken it to Speaker’s Corner – often the rabble debating are far more informative and entertaining and sadly, quite indifferent to the author of the piece that has led them/us to their fuming fury. The articles on correct grammar and tea brewing do attract an incredible following.