Canberra Times locked out? The ACT government announced yesterday that it would be selling off $400 million worth of assets in order to pay for its controversial light rail project, but it neglected to invite journalists from The Canberra Times to the press conference about the plans. This didn’t go down too well with the paper, with reporter Tom McIlroy tweeting his displeasure yesterday afternoon. Luckily for us, Chief Minister Andrew Barr also used the social media platform to defend the decision (click on the picture to read the full exchange): 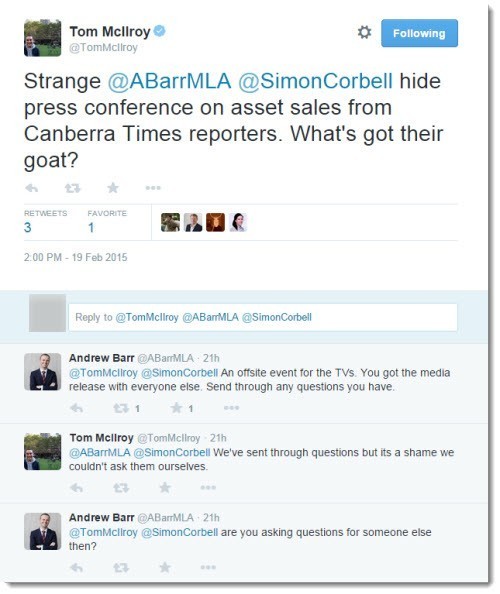 The move by the ACT government has raised more than a few eyebrows in the nation’s capital, with one tipster wondering how the government would survive without coverage from the newspaper:

“Canberra is a one-paper town. Absolutely everything the ACT Government does is dropped to the C’rimes and published as an ‘exclusive’ before later being ‘announced’. The ACT government’s media team is so inexperienced and (frankly) lazy, they wouldn’t know how to work with other media outlets. This exclusion is extremely out-of-character.”

Another tipster pointed out the anomaly to us, saying that perhaps The Canberra Times had been singled out after its dogged pursuit of Education Minister Joy Burch, who admitted she had asked the CEO of Menslink to write a reference for her son, who was convicted of aggravated robbery last year. Burch’s son also visited 10 schools with the partly government-funded organisation, without having a working with vulnerable people check. Barr told the local ABC this morning that “some sections of the media” had been engaged in a “witch-hunt” when it came to Burch. Looks like the ACT government is annoyed that journalists are actually doing their job.

This sounds familiar. We know that sometimes it can be hard to think of something new to write very single day, but a tipster has caught out The Australian‘s Chris Kenny submitting almost the exact same column twice in a matter of weeks. Yesterday Kenny defended the Howard government’s position on David Hicks in a column titled “Self-styled jihadi David Hicks is no innocent abroad“, which ends:

“Legislative changes since the age of jihadist terrorism dawned would make such activities an offence under Australian law now.

However, at the time Hicks was not only in a moral vacuum but a legal vacuum, too.

The US ruling is based on the technical grounds that the offences didn’t properly exist at the time — and it overlooks the fact Hicks undertook never to appeal his conviction.

But none of this makes him an innocent abroad.”

Strangely enough, Kenny wrote a column with the title “Self-styled jihadist David Hicks was decidedly no innocent abroad” on January 17, which ends with the exact same paragraphs, as well as including many more of the same paragraphs as yesterday’s column. While some of us feel a sense of deja vu while reading Kenny even when the words are different, this time it really was a kind of Groundhog Day.

IT outsourced at Toll. It’s been a big week for Toll Holdings, with Japan Post announcing a takeover bid, but we hear from a tipster that takeovers aren’t the only thing going on at the freight company:

“Same day Toll announce purchase by Japan Post, they brief IT staff on plans to fully outsource IT by mid 2016. While not announced, rumours are that Optus and Infosys are the service partners in consideration. This will affect both the internal IT services functional group Global Information Services (GIS) and IT that is based in the business units and divisions.”

We asked Toll Group spokesman Christopher Whitefield if IT services were bing outsourced and were told:

“As announced to staff this week, after reviewing the various IT functions across the group Toll has decided it will be transferring some of its IT support functions, namely infrastructure and applications support, to world-class external providers under a managed services arrangement. This large program of work will take approximately 18 months, and Toll will continue to communicate directly with our employees and the market as appropriate.”

No contractors have been confirmed yet, and the number of any redundancies is also not yet known.

Geneva to Canberra. We had previously reported that Louise Abbott, the eldest of Prime Minister Tony Abbott’s daughters, had been offered a job in the Department of Foreign Affairs and Trade’s graduate program, and we hear from a tipster that she started in the role earlier this month. Her name is listed under “engagements” in this Australian Public Service gazette. We hope that Canberra is just as exciting as Geneva, where Louise Abbott worked in Australia’s embassy.

Danby challenged. The ABC in Melbourne is reporting that Labor Right stalwart Michael Danby will be challenged for preselection in his seat of Melbourne Ports by Amanda Stevens, mayor of Port Philip City Council. Danby has held the seat for 17 years. Know any more preselection news? Let us know.

Bishop to the rescue. You would hope that as Speaker of the house, Bronwyn Bishop would get a break from representing the government at official functions, being that she is supposed to be an impartial umpire in Parliament, but it seems that’s not the case:

“New federal judicial appointees were welcomed in the last day or so — I believe in Sydney. Attorney General George Brandis could not be there in person (in Washington it seems). Why then was he represented by Bronwyn Bishop? Surely not a role for Speaker. Does Brandis have no Parl Sec?”

We called Bishop’s office to ask about the appearance, but didn’t hear back by deadline.

Dutton — does he have WWC? Following yesterday’s piece on the legal and ethical issues surrounding Immigration Minister Peter Dutton acting as the legal guardian for unaccompanied minors in immigration detention centres, one curious tipster wrote to us asking if Dutton had a working with children check. We put the question to Dutton’s office, but didn’t hear back by deadline.

Oldies get in on electronic graffiti. Proving you’re never too old to try something new, Philip Ruddock joined Twitter yesterday — maybe he needs something to do since being shafted as chief whip of the government. We welcome Ruddock to the world of electronic graffiti, and ask that Julie Bishop also school him in using emoji, as we’re always looking for new ways to interact with our elected representatives.

Cyclones Marcia and Lam hit. Communities in central Queensland and far north of the Northern Territory are still in lockdown as they face Cyclones Marcia and Lam. While it’s a scary time for locals, we hear that there’s no shortage of interesting tidbits around. Channel Nine’s put reporter Joel Dry on the job in central Queensland; we wonder if he’ll feel a bit out of place. If you’ve got any storm pictures or stories, send them our way.

Pics or it didn’t happen. This year’s Queensland election will be remembered for many things: the lightning-fast campaign, the unseating of Campbell Newman and the huge swing to the ALP. Crikey readers will remember it as the fateful day that our politics editor Bernard Keane made this very unwise promise:

Now that Annastacia Palaszczuk has well and truly taken the reins, we’ve been gently asking when this nudie run will take place. Keane has provided Ms Tips with this still shot of a supposed nudie run video, but no more. It’s getting a bit weird to keep asking — so maybe our readers should help Ms Tips out (that is if you really do want to see more of this)? 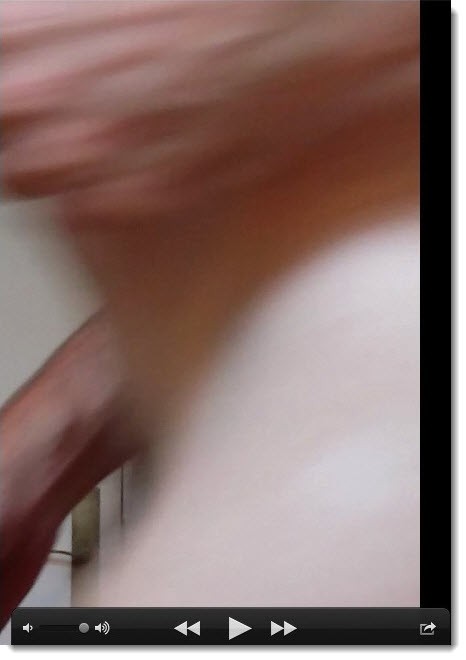 I’d just call the shot ‘journalist descending a staircase’ and leave it at that.

I’m from Queensland, and I can tell you, I think we’ve got enough to cope with just now.

“also school him in using emoji, as we’re always looking for new ways to interact with our elected representatives.” Brilliant. Love it.

Regarding Bernard Keane’s romp in the nude. I think we have seen as much as we need to. Don’t risk your readership base.

re: nuddy romp. MY EYES

Any thoughts on the Pugilist’s idiotic ‘threats’ to Indon??