The remains of MH370 are officially nowhere

Close to a year after Malaysia Airlines flight MH370 disappeared, the determined ship-chaser Mike Chillit has posted a telling graphic (below) about the search for the wreckage of the 777-200ER on the floor of the southern Indian Ocean. 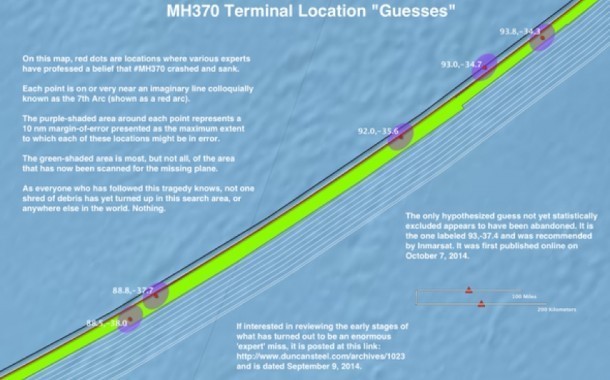 In case your screen is too small to read the description on the left of the frame, this is what it says:

On this map, red dots are locations where various experts have professed a belief that #MH370 crashed and sank.

Each point is on or very near an imaginary line colloquially known as the 7th Arc (shown as a red arc).

The purple shaded area around each point represents a 10 nm [nautical mile] margin-of-error presented as the maximum extent to which each of these areas might be in error.

The green shaded area is most, but not all, of the area that has now been scanned for the missing plane.

As everyone who has followed this tragedy knows, not one shred of debris has turned up in this search area, or anywhere else in the world. Nothing.

On the upper right-hand side of the diagram, which also shows the paths to be followed by the search ships, Chillit (found on Twitter @mikechillit) notes:

The only hypothesized guess not yet statistically excluded appears to have been abandoned. It is the one labelled 93, -37.4 and was recommended by Inmarsat. It was first published on October 7, 2014.

Chillit also links to the Independent Group of (quite sceptical) experts and the detailed post by Duncan Steel last September as to their recommended search priorities and reasons.

Those reasons are not easy for a lay reader to follow and, if a better understanding is sought, it will only come from doing your own reading and research as to the terminology and methods. There is no simple, pop-up journalistic short-hand path to enlightenment. However, making such an effort will repay the hours invested by those who are truly engaged by this mystery.

For this reporter, the wider context to this tragic epic is the untruthfulness of the Malaysian government and its aviation authorities in relation to the wretchedly inconsistent and misleading official narrative that was rolled out about MH370.

The lies about what its military radar saw — in that cabinet knew what it saw on the morning of the crash, yet the government denied it — while the Prime Minister deliberately and very publicly misled the search nations including Australia into extending the collective effort deeper into the South China Sea, further west into the Andaman Sea and even as far north west as Kazakhstan, are inexplicable.

The non-release of the full inventory of cargo below the passenger deck is mysterious, but clearly highly relevant, otherwise it would have been disclosed.

The denials about any phone calls from passengers, or indeed, any voice contact with the pilots after the flight disappeared from air traffic control’s (ATC) radar screens as a transponder-identified object while over the Gulf of Thailand, may be true, but need further, more detailed examination.

The response by any credible airline after a flight suddenly vanishes is to be incredibly persistent in trying to contact the flight by any means; by sat phone, by calls to other airliners that would have been in the vicinity, by persistent inquiries among other adjacent air traffic control areas; to shipping, to police in coastal villages, and on and on and on, until that terrible moment when the fuel on the jet must have run out.

But with MH370, no. Just a few calls were made according to the official narrative, and some of them remarkably late. The indifference of Malaysia Airlines to finding out what had happened to 239 souls in the early hours of March 8, 2o14, is utterly callous and unforgiveable. They should have been hitting the phones until their finger tips bled. Their conduct, going on their own disclosures, was unspeakably deficient in every regard.

If they were calling MH370 every minute, calling Vietnamese and Thai ATC every minute, and ringing every kampong, town, city, ship, and other plane every minute, as they should have been, why didn’t they say so?

We are left with the most appalling and shameful and inexplicable indifference in the history of modern aviation on the occasion of a sudden loss of contact. (In the case of MH17 the calls were urgent, and comprehensive, and sadly, the terrible reality of a shoot down and crash was discovered within minutes.).

It is the very conduct of Malaysia Airlines, and the Malaysian government and aviation officials, that may hold some of the answers about MH370 that the searchers are attempting to find on the floor of the southern Indian Ocean.

Malaysian conspiracy to cover up the truth of MH370