Greece has decided to stick it to the EU and extend its current loan arrangement. Germany says "nein". Who will blink first? 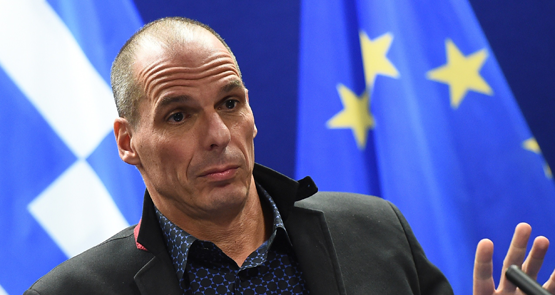 Greece moved into new and unknown territory last night, entering into a stand-off with Germany over the extension of a Greek proposal to extend its current loan arrangement, with a number of modifications to the existing plan.

Greece currently has only enough money to meet existing commitments until the middle of next week, so presenting even a minor alteration to the existing plan is a high-stakes game. Yet it is also the central plan of the newly elected Syriza government’s program.

Syriza’s plan, as presented by Finance Minister Yanis Varoufakis, agrees to a lot of the existing conditions that govern the existing loan arrangement — which of course simply transfers EU funds to EU banks, without the money ever touching down in Greece. The willingness to “abase” themselves, as some have put it, is more apparent than real, since Varoufakis has inserted a key clause claiming the right of the country to administer its own programs, “so long as they do not impede the progress of recovery, etc”.

Since Syriza is arguing that measures such as raising pensions and wages back to penury, rather than desperation levels, would stimulate the economy and thus promote revenue, the clause is a get-out for Syriza to continue its program while negotiations over long-term restructuring of its 175% of GDP debt continue.

The letter met with vague approval in general terms from the EU, with Commissioner Jean-Claude Juncker describing it  as “positive step”, but all 18 eurozone finance ministers have to agree, which is why the refusal of Germany’s Wolfgang Schaeuble to consider it as even a proposal, is key. Finland and Slovakia have also made it clear that they reject it, but Germany is really the only game in town.

The proposal was sent from Greece to the eurogroup ahead of a meeting today. Schaeuble’s rejection of it was immediate, surprising observers who believed that it would get at least consideration. However, many argue that Schaeuble acted swiftly because of the open-ended clauses in the letter, whose real intent was likely to escape the attention of some.

This crunch-point for Greece has come earlier than expected — most believed that some form of three- or six-month bridge finance would be agreed to by the EU — a product of the cancellation of the collateral-eligibility of Greek bonds and the continued run on Greek banks. Should no agreement be reached over the next few days — it seems impossible there will be one today — then Greece is at crisis point: it will either have to accede to an identical plan to that being administered by the New Democracy government it deposed, gain a huge one-off sovereign loan from somewhere else, or begin preparations to exit the euro.

First reserves of the Bank of Greece will run out next week, but there are some holdings in other government departments that would keep things going for a week or two after that. Greece has 8 billion euros due to pay by the end of March — 2.3 billion to the IMF, and 5.7 billion in bond rollovers — and it will need about 5 billion from the EU, so that these large financial groups can pay themselves.

This is an extremely serious situation — but it was always going to come. It has simply come earlier.

The Greek government’s position has been presented as a “surrender” by Right, centre and groups to the Left of them as well, but that is absurd. Syriza’s double-claim was that it would reverse the austerity and deflation spiral imposed by the troika, stay in the euro if at all possible, and then push for a longer-term re-arrangement of the debt. The letter does all that, and tries to buy some time. Politically, neither Syriza, the wider Left nor the country as a whole is in any shape to leave the euro right now. The country has thrown its support behind Syriza — it currently stands at 48.5%, with New Democracy having fallen to 18% — but only for the purpose of staying in the eurozone. Support for an exit is far more sectional, and should it happen, some support will rush back to the Right as a quick case of buyers’ remorse.

That’s one reason why Syriza has been so keen to offer the EU all sorts of concessions, even at the risk of alienating sections of their supporters at home. They want to make it perfectly clear to everyone at home that they’ve done all they can to come to a deal within the broad limits of what they were elected to do. And abroad too, and in both cases, it appears to be working.

Schaeuble’s immediate rejection of the Greek offer surprised everyone. “What’s the strategy?” BBC economics reporter Robert Peston was asked. “Search me,” he replied, and he wasn’t alone in bemusement as to what exactly the Germans were trying to do. Paul Krugman noted that the Germans were “pro-exit” and de facto “pro-Golden Dawn” too. One immediate political effect was another one Greece had hoped for — to promote political division within Germany, where the otiose leader of the Social Democrats suggested the proposal was worth considering and chided Schaeuble for rejecting it too fast.

Syriza has to keep itself together too — and Germany undoubtedly hopes that pressure can force a split. Sections of the Left in Syriza, including rival leading economist Costas Lapavitsas, believe that they should cut straight to a euro-exit, and that Varoufakis and President Alexis Tsipras are pursuing a disastrous strategy that will weaken the party, the Left and the country before an inevitable exit anyway. These are nerve-racking questions, because it is quite possible that one strategy is very right, and the other very wrong, but there is no way of telling which is which, and anyone who suggest there is is simply striking attitudes.

Given the obvious failure of the austerity memorandum — which was meant to have a recession bottom out at 15% unemployment and has instead shrunk GDP by 25% — a failure to renegotiate is pure sadism, for a variety of political and institutional purposes. A renegotiation is supported by people across the spectrum, including many at the heart of neoliberalism. The Germans appear to be much more relaxed than everyone else about a “Grexit”, even though it ruptures the idea of a one-way euro, and will damage the bottom line of the whole continent. Greece, for its part, desperately wants to hold on until the end of the year and hope that Podemos can win power in Spain — at which point there can be something of a unified south. But six months is an eon. A week is a long time in politics, and a day is a long time in Europe.

Grexit, staged by the left: why Greece voted ‘no’

What would Germany benefit from a Grexit? Hasn’t it been the weakness of the southern economies that has kept the euro down to the benefit of the big exporters (eg Germany as well as France and Britain to a lesser extent.) How much would they lose in eu loans if Greece did drop out? Or are is it worth it to Germany to sacrifice Greece as a cautionary tale should Podemas win in Spain?

A Grexit would be a bad outcome but if force engineered by the intransigence Germany’s Weimar hag-ridden race memory then it will have the effect of pulling at the thread that knits together the current 27 strange bedfellows.
The EU is simply a 19thC colonial empire writ small, the PIIGS provide the serfs & markets to keep the industrial wheels of the Ruhrgebiet spinning, as LukeH notes above.
And lest anyone think that Berlin is too sensible to repeat previous nose/face spite exercises hasn’t bee paying attention – they still haven’t really settled down from the Ossie invasion, though at least the old DDR is now almost empty enough to be reimmagined as Lebensraum.

So, Greece gave the finger to germany and the finger ended up Greece’s bum.

The germans have quietly been getting themselves into a position where Grexit was no longer Greeksmail stuff.

Probably the single nastiest thing the greeks did was to have a cartoon in which Schauble was dressed in a Nazi uniform wanting to extract soap from greek fat. Classy stuff but I suppose that bigots have rights in Greece too.

Some folks are even reported to have been a bit surprised that the germans got a bit pissed off with this sort stuff and how it became sort of personal for some of the germans.

Net result: a wholesale backdown from SYRIZA on all fundamental matters. Next step: the greek electors find out that SYRIZA dudded them with impossible-to-deliver promises.

Now, where else have we seen that sort of stuff lately?

Put some more Greece into those nipples and stick it up the financial reichstag. No lender has a right to abandon the lendee in times of hardship and duress. Greece and the Greek people are well aware that they are a pawn in a much bigger NWO game-plan.