Climate change is the ultimate form of intergenerational theft -- and Joe Hockey is making it worse. 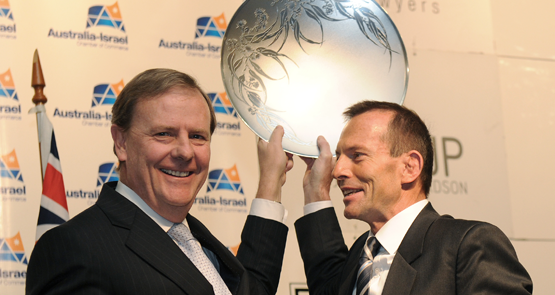 The government loves the phrase “intergenerational theft”. Tony Abbott, in particular, has been regularly invoking the “crime” (no points for guessing the perpetrator) of intergenerational theft about the budget since he became prime minister. Other ministers, and Treasurer Joe Hockey, also routinely invoke it.

Indeed, the frequency with which the government has used the phrase has increased in rough proportion to the increase in the budget deficit that has occurred on its watch. When Labor left office, according to independent assessments by Treasury and Finance, the combined budget deficits for the years 2013-17 stood at $54.6 billion. According to December’s MYEFO, they now stand at $140.9 billion. If theft is going on, the Coalition are a damn sight better at it than Labor.

It’s a lazy concept, even more childish than the standard equation of national and household budgets that the Coalition also likes to invoke. You may as just chant “debt is evil” repeatedly and be done with it. But where the concept of intergenerational theft has a far more rigorous application is in relation to climate change. Previous generations, and our own, are causing climate change that will significantly reduce economic growth in coming decades. Our children, their children and subsequent generations will face higher prices, lower economic growth and higher government expenditure on natural disaster recovery, drought relief and health than would otherwise be the case.

A recent White House report identified that keeping climate change to a rise of 2 degrees or less would have minimal economic impacts; stabilisation at 3 degrees would impose a 0.9% reduction on annual global growth, and stabilisation at 4 degrees would impose a further 1.2% reduction in economic growth globally, every year. A 2011 Treasury analysis here showed how delays in addressing climate change significantly increased mitigation costs:

“Delay brings initial benefits, but every year of global delay adds to the eventual economic and social cost of tackling climate change. Delaying global action by 3 years adds around 20 per cent to the first year global mitigation cost. Delaying entry by a further 3 years adds a further 30 per cent to the first year mitigation cost.

Australia of course only contributes a small fraction of global carbon emissions, despite being the most carbon-intensive western economy. But our example is influential, apart from our historical responsibility, as an industrialised nation, for earlier decades of emissions. The Abbott government’s abandonment of an efficient, effective carbon pricing scheme that had had minimal impact on consumers, its attempts to work with the Canadian government to actively undermine international agreements on climate change and its sabotaging of Australia’s renewable energy industry have all been noticed internationally. On climate change, the Abbott government isn’t merely an intergenerational thief, it’s sought to become the leader of a low-rent intergenerational mafia.

Worse, even if Joe Hockey wants to deny the existence of climate change, dumping the carbon price has cost him over $6 billion in revenue over the forward estimates. That is, Hockey has exacerbated his own “intergenerational theft” budget problem through his  climate denialism.

The government insists that it does accept the existence of climate change, and will meet its commitment to a 5% reduction in emissions by 2020 with its “Direct Action” program, in which the government will directly purchase carbon abatement outcomes. But no one outside the government believes it will achieve emissions reductions even remotely near the 5% target, especially after the program was slashed from $10 billion over 10 years when originally announced to just $2.55 billion.

Hockey is now in the process of hyping the forthcoming (indeed, overdue) intergenerational report from Treasury, which he has promised will make Australians “fall off their chairs”. Such an outcome is, luckily, unlikely, given the lack of interest most voters show in government reports of any kind — which is probably why taxpayer money will be spent to advertise the report, designed to help Hockey reset his budget communication strategy.

Or will it be like Peter Costello’s second Intergenerational Report, in 2007? What did that say about climate change?

“Scientific evidence indicates that climate change can be expected to affect both Australia’s physical and economic environments. The scale of the change, and the way it will manifest is difficult to predict and plan for. Nevertheless, the CSIRO has identified a number of possible outcomes, including increased temperatures, declining average rainfall, and greater frequency of severe weather events such as prolonged droughts and storms. All of these can be expected to impact on Australia’s future GDP. However, modelling such impacts is very difficult, as evidenced most recently by the Stern Review, and emphasised by its critics. Nonetheless, there does seem to be consensus around the fact that significant levels of global warming imply losses in global GDP over the longer term that should be factored into the policy choices made today.”

One would hope Hockey’s intergenerational report says at least as much as Peter Costello’s did eight years ago.

Oh, but wait, Costello’s report had a little bit more to say about how to address climate change.

“Directly ‘purchasing’ environmental outcomes can be effective and, in some instances, appropriate. However, applied broadly, it can involve significant fiscal costs. While many consider climate change mitigation is best addressed through market-based mechanisms such as an emissions trading scheme, governments may alternatively elect to purchase abatement activities using budget funding. The potential cost to the budget from adopting the latter approach can rise quite significantly, imposing a substantial tax burden on today’s, and future, generations.”

Kudos to Costello: he accurately predicted “Direct Action” in 2007, and nailed its central flaw. Indeed, it sounds very much like, by Costello’s lights, Direct Action is itself an example of intergenerational theft.

Shifting the “intergenerational theft” rhetoric from budget deficits to climate change looks smart at first glance but it leaves that dang awkward sense that Bernard actually agrees with the Coalition that this deficit problem we are building is a problem the next generation will have to face.

But he’s not allowed to say it.

And comparing deficits under the Coalition versus Labor is a very shallow observation that does not bear the most superficial challenge but will cheer up the faithful.

This is further evidence, if it were needed, that this government is driven by ideology and a peculiar resistance to facts and evidence. The carbon tax debacle is a template for much that is wrong with this government. Its paymasters in the extractive industries didn’t like it, so it had to go. Leaving a huge hole in revenue was collateral damage that they obviously underestimated and thought they could cover with “savings” that penalised the poor (i.e. non Liberal voting) people. That there would also be consequences for the climate wasn’t factored in because they do not believe in anthropomorphic causes of climate change. Thus does ignorance, bigotry, anti-science and special interest politics form a perfect circle.

That’s funny, because although Costello was almost prescient (cough!) about climate change’s intergenerational theft, he committed some of the worst aspects of intergenreational theft by providing glaring tax benefits to superannuants just at the time that the baby boomers were about to hit retirement, entitlements that were always going to be extraordarily difficult to wind back.

As some high profile economists remarked, some of the worst budget decisions in living memory.

But I am interested in David’ Hand’s explanation of why the coalitions deficits are ok, but Labor’s were bad.

The deficits should be addressed, I certainly agree with that Mr Hand, however taking money from the unemployed and students and giving money away to huge corporate entities (the carbon tax and Direct Inaction) hardly seems like a strategy to confront the deficit bogey.

But please, enlighten us.

Has Tony Abbott’s government employed a specialist “Bureau of euphemisms” to add to their anti-everyone who doesn’t vote for the Liberal Party hate chamber? ‘Intergenerational Theft’ This euphemism could apply to me because I once stole two shillings from my Grandmother. Does this put me in the same league as a multi-national, minimal tax, giant corporation? I don’t think so.

“And comparing deficits under the Coalition versus Labor is a very shallow observation that does not bear the most superficial challenge but will cheer up the faithful.”

After all, the Coalition have managed to annoy most of the electorate with spending cuts destroying consumer and business confidence, haven’t had a GFC to deal with, and even then the result is a massive increase in the deficit. I can only assume a comparison is to be avoided because it would make the Coalition look terrible?