Paint it green. We’ve had tips before about staffers and pollies running loud phone conversations in public places, but lucky for us, it seems they never learn:

“Overheard on Lilydale train bound for the city this morning — loud, colorfully dressed woman dialing into telephone conference with Greens colleagues. She was discussing publicity material to argue for proportional representation in House of Representatives. ‘We can’t colour in all the seats to show the result from the last election as PUP would get eight yellow seats. Greens supporters won’t like this and won’t support PR for seats. We should just colour Greens seats and not any others, so they won’t know.’ Nice to see Greens staff/officials treating their supporters the same way as major parties.”

Price rise costs both sides. Last Monday was a big day for newspapers as they prepared for the non-spill called for 9am that morning. But we hear from a tipster that a spanner was thrown in the works at The Daily Telegraph that had nothing to do with unrest in the government. The price went up from $1.30 to $1.40 an issue, but it cost the company more than consumers:

“Tens of thousands of copies of The Daily Telegraph had to be pulped last week. The cover price was going up by 10 cents but someone forgot to tell the editor. The mistake was picked up after tens of thousands had already gone to print.”

We put the tip to News Corp but didn’t hear back by deadline.

Sukumaran art to live on in competition? A caller to 2GB in Sydney yesterday suggested a rumour that a painting by Bali Nine member Myuran Sukumaran will be a finalist in the Archibald Prize in July. Sukumaran has been a student of celebrated artist Ben Quilty while he has been in Kerobokan prison in Bali, and has been running art classes for other inmates for a few years. The prize is run by the Art Gallery of NSW, where Quilty is a trustee. Entries for the award open soon; we’ll be watching with interest.

#Malcolmwatch. While we were on Turnbull watch yesterday, we received a tip saying that promoted posts from the member for Wentworth were showing up in people’s Facebook newsfeeds — just another way to remind us he’s there. Another tipster, experienced in the ways of the sponsored Facebook post, asked about the location of the people seeing the ad, “given that ads can be pushed to particular geographical areas, suburbs and post codes, a person seeing the ad in, say, Darwin might be indicative of something far different to it being seen by a person in Bondi”. Ms Tips is unsure of the location of our original tipster, but lo and behold the post showed up in her own newsfeed yesterday — and Facebook knows she isn’t a constituent of Wentworth (or anywhere near it). Maybe the Minister for Communications is trying to tell us something.

Census of deja vu. Yesterday we were tipped off that the government was considering scrapping the 2016 census in order to save money — and today it has been confirmed by both The Australian and The Age/SMH. A spokesperson for Kelly O’Dwyer said: “The government and the Bureau of Statistics are consulting with a wide range of stakeholders about the best methods to deliver high quality, accurate and timely information on the social and economic condition of Australian households.” The census is meant to be a definitive measure of the Australian population, but we hope the ABS heeds the lessons of the 2006 Irish census, where the populations of Leinster and Munster were miscounted, as the two teams played in the semi-final of the Heineken Cup in Dublin that night — with many one-eyed Munster fans counted as having moved to neighbouring Leinster. Crikey‘s Bernard Keane writes today that he doesn’t hate the idea of getting rid of the census, but much of the reaction has been calls to save the great electronic graffiti that the census provides, like this one from earlier this week: 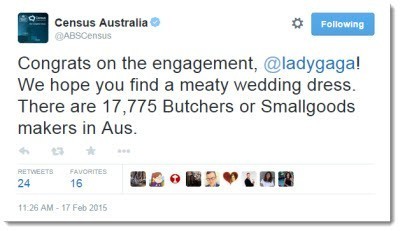 #Simkinwatch. Some ABC watchers are missing former political correspondent Mark Simkin, now that he has moved to wrangling the message coming from the Prime Minister’s office. We hear that if any Sydneysiders are really missing Simkin’s voice, they don’t have to travel far to find it:

“It’s good that the Prime Minister’s new Chief of Communications Mark Simkin hasn’t given up his second job, given the parlous state of his new boss’s political future. While Mark’s promotion to the heady heights of the PMO from the job of Chief Political Correspondent with the ABC was much heralded, what was little known is that Mark’s voice  can also be heard by Sydney bus commuters enthusiastically describing each upcoming stops on the routes of the red Metrobus network that operates across the city. He does a sterling job at this too, even letting me know where else I can go to if I were to ‘alight here’ at the nominated stop along my morning route. If PM Tony isn’t around much longer at least we can be reassured that Mark can still pay his bills with the money he receives from his gig at Sydney Buses.”

We called Sydney buses to ask about the voiceover work and were told that the voice doesn’t belong to Simkin — he must have a voice doppelganger.

Puppy Murdoch. We hear that Rupert Murdoch has finally decided on a name for his golden doodle puppy (featured in Tips) — “Bluey”. The name is a very Australian reference to the puppy’s ginger fur, according to Natalia Ravitz, the chief of staff at News Corp. Another red top to add to the family.

No boycotts in Canberra. On Tuesday we had a tip that Canberrans were avoiding the Indonesian dispaly at the Multicultural Festival, but another punter tells us that if the crowd was a bit thin, it had nothing to do with Julie Bishop’s suggestion that Australians may “boycott Bali”:

“I need to report that I spent time watching the Indonesian performance and at the Indonesian stand at the Multicultural Festival on Sat in Canberra and both were well attended. And my friends and I discussed the fact that Bishop’s boycott Indon/Bali call clearly fell on deaf ears locally, which isn’t surprising given the large Indonesian community many of us have grown up with here in Canberra. The claim in tips today was utter crap, unless they were there during the rain on Saturday night.”

Photo op of the day. G.K.Chesterton once sent his wife a telegram, saying “Am in Chipping Norton. Where should I be?” We thought of this on seeing Albo’s tweet this morning. Well, if you’re in the wilderness, may as well dedicate a bridge. 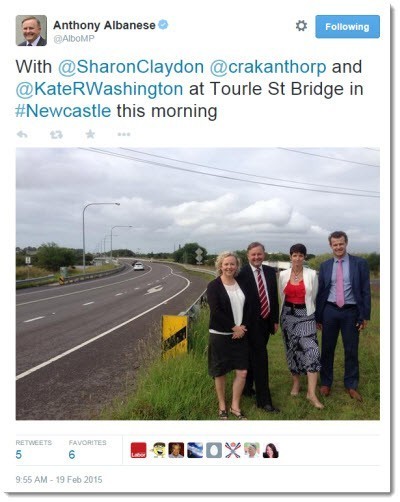