Origin Energy is still making money, but its bigwigs (and shareholders) would be a lot happier if oil were still $100 a barrel. 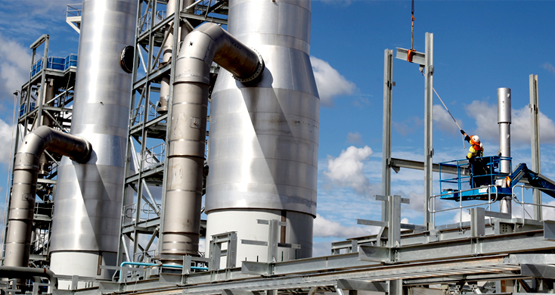 The decade-long dream run may be ending for shareholders in Origin Energy, which has sailed into extremely choppy waters as it completes the massive $25 billion Australia Pacific LNG (APLNG) project on Curtis Island, in Gladstone Harbour.

Origin has outperformed the broader sharemarket, but the oil market has turned against it, limiting shareholder returns, and this morning it reported a 9% drop in underlying earnings to $346 million for the December half-year and a statutory loss of $25 million — the first bottom-line loss since 2011 — dragged down by some not-particularly-significant non-cash impairments.

The (undisclosed) carrying value of Origin’s 37.5%-owned APLNG was not impaired, although a fortnight ago UK oil major BG Group wrote down the value of its 75%-owned QCLNG project — which is nearly identical and right next door — by $9 billion as oil prices halved.

Origin and Santos — which got into coal seam gas in Queensland earlier and more cheaply than BG, and likely therefore have lower carrying values — have declined to follow BG’s lead. Santos took a $1.6 billion hit across its portfolio last week, but its 30%-owned Gladstone LNG project was spared.

Origin said today the company’s directors had “carefully reviewed the carrying value of all assets and notwithstanding the recent fall in oil prices, are satisfied with the value of these assets, with the exception of the $53 million impairment in relation to the New Zealand assets. At current market expectations of oil prices, the economics of Origin’s investment in APLNG remain robust.”

Origin says it has undrawn loan facilities of more than $5 billion with which to fund the roughly $2 billion yet to be spent on the APLNG project, with the first of two so-called LNG “trains”, or liquefaction plants to come into production by mid-year, with the second scheduled for the end of the year. Once up and running, Origin expects that by 2016-17 it will be raking in $900 million a year from its 30% share in the project, given market expectations that oil prices will gradually drift back above US$80 a barrel. Even at today’s oil price, Origin says, investors will see cash flow coming through.

Origin chief Grant King told analysts this morning it is not today’s oil price that matters, but the price over the next couple of years once both trains are in full production. With the project 80-90% complete, King says APLNG is nearing the magical point at the end of this year where “we switch from lots of money going in to, hopefully, lots of money coming out of the business”.

Shareholders are about to see a return on their billions, but it will be much lower than expected when Origin committed to the project four years ago. Like everyone else, Origin did not see last year’s oil price collapse coming and, while the lower earnings will be partly offset by the lower Australian dollar, King admitted that APLNG coming on stream “would have been a lot more exciting if oil was still at $100 a barrel”.

To prop up cash flows from APLNG, Origin has identified $1 billion a year in ongoing cost savings from the project — screwing down contractors as the pipeline of work dries up and shedding workers from its own operations as part of a “clean-sheet” rethink — but is leaving it to analysts to make their own assumptions about future revenues and therefore fair carrying values. King said only this morning that lower oil prices would have “a significant impact on the value of APLNG … but the impact is two years out”.

While the oil price fall certainly has hit Origin’s shares, the impact on earnings in the December half was overshadowed by a larger, temporary impact from the purchase of cheap ramp-up gas from BG Group’s QCLNG project, which shipped its first cargoes in December. That ramp gas boosted Origin’s earnings in its energy-markets business, but meant it made less money selling its own gas — and, more importantly, the liquids (oil and condensate) which come from its conventional gas wells. That unsold gas and liquids remains in the bank and will contribute to a future surge in earnings from Origin’s exploration and production business.

Relative to Santos, Origin is well placed to ride out the storm in oil markets, with the best CSG reserves and dependable earnings from the largest electricity and gas retail customer base in the country — a business where margins are going back up. For example, Origin’s gross profit per electricity customer jumped 11% from $217 to $240 during the half, compared with a year earlier. (Not seeing cheaper electricity bills? Me neither.) Origin is also benefiting, as King pointed out today, from being “short” generation in a market where there is an oversupply of capacity and wholesale prices are low and staying that way.

The truth, as Credit Suisse analysts wrote last week, is that it is becoming “clearer by the day” that the CSG-LNG projects at Gladstone were built for a world in which oil was priced at US$100 a barrel. From here on in, or until there is a dramatic rebound, only the most profitable CSG reserves will be developed.

In that context The Australian Financial Review’s editorial this morning, complaining Australia had not shown much “get up and go” in developing its gas resources seems bizarre given some $200 billion has been invested and in the short space of five years or so Australia will have turned itself into the world’s largest LNG exporter, leapfrogging Qatar, for a while at least. Such a breakneck pace of development with seven giant projects happening at once on both sides of the continent — not the unions, silly — has caused enough problems as is, including cost inflation. It is impossible to imagine faster gas development than we have seen, including in NSW, where CSG companies have complained long and loud about regulatory impediments and uncertainty but Santos’ Narrabri project, for example, has fallen behind the timeline it set down with the state government only last year.

Turning coal seam gas into LNG in the three BG, Santos and Origin projects at Gladstone — themselves representing more than $70 billion of investment — is a world first, and it is hardly surprising it has not all been smooth sailing.