Fairfax rewards shareholders. Fairfax’s shareholders are about to be rewarded, with the media company announcing its first share-buyback since 1999 this morning as it posted encouraging half-year results. The company plans to buy back 5% of its shares over the next 12 months. This comes on top of a 2c fully franked dividend to be paid […]

Fairfax rewards shareholders. Fairfax’s shareholders are about to be rewarded, with the media company announcing its first share-buyback since 1999 this morning as it posted encouraging half-year results. The company plans to buy back 5% of its shares over the next 12 months. This comes on top of a 2c fully franked dividend to be paid out on March 18 — the company is handing 57% of net profit excluding significant items straight back to shareholders.

Net profit after tax was $26.3 million — a significant fall from last year’s $86.4 million profit. Excluding “significant items” profit was steady at $86 million — the company spent $38.3 million on redundancies and other restructuring and $18.3 million in impairment charges. Revenue fell 12.9% to $943.3 million.

In a statement, Hywood painted a picture of stability and control, saying the result was a “solid outcome” that had been “planned for”. “There are no surprises,” he said.

Fairfax as a whole may have stabilised, but the falling fortunes of its print assets haven’t yet halted despite significant reduction in head-count. The worst-performing division was Australian Community Media, the company’s rural newspaper division, where revenues fell 7.4% while costs rose 1.1% on the same quarter last year. This is despite the commencement of a radical restructuring of how its newspapers function that involves fewer photographers and subeditors. In Metropolitan Media — which houses the Sydney Morning Herald, The Age and Australian Financial Review — revenues declined 2.6%, while costs rose 3.0%. Hywood described this as a “meaningful reduction in the rate of revenue decline”.

Domain, the company’s real-estate division, posted revenue growth of 26%. Its profits, calculated by Crikey by subtracting its $59.9 million in costs from its $94.4 million in revenues, were $34.5 million. There’s been speculation for years now, firmly denied if one asks, that Fairfax is intending to sell off Domain. If they had done so by now, Fairfax’s results this quarter would be in the red. — Myriam Robin

Lateline has been off air since December 5, and late last year had its future in doubt as the ABC sought to reconfigure its current affairs coverage in the wake of cuts to its operating budget. Saved after a staff backlash over its axing, Lateline will now have a more flexible format featuring interviews, stories and investigations.

ABC Director of News, Kate Torney said the new format of the show will give Lateline the opportunity to advance the news agenda with the “ability to tackle stories from more diverse angles”.

Alberici commented on the lack of information on Twitter last week, saying “As a consumer, I would be wondering what was going on”. — Crikey intern Abbey Casey

Front page of the day. The Sydney Morning Herald celebrates Chinese New Year by rendering its masthead in Mandarin. 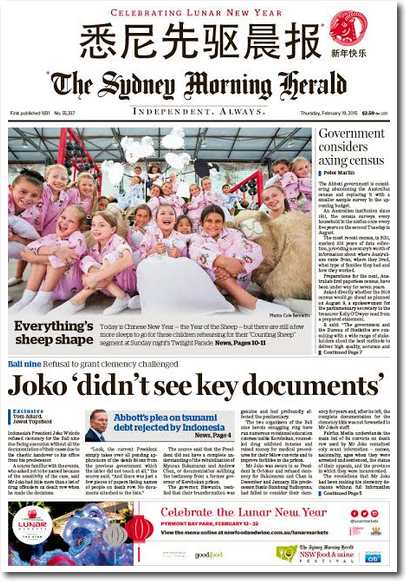 A Fairfax bid for Ten would be corporate suicide