Hope and justice: Australia holds vigils for Chan and Sukumaran 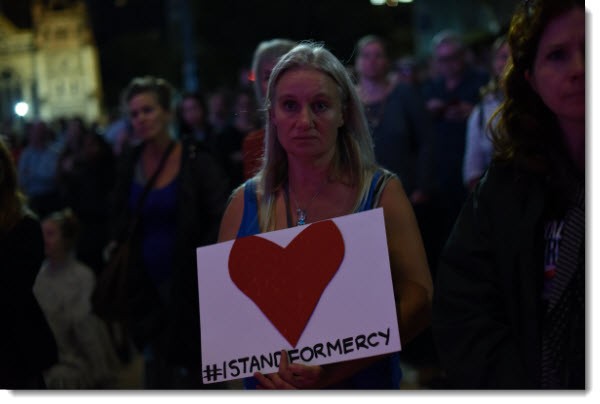 In letters read at vigils around Australia last night, Myuran Sukumaran and Andrew Chan thanked the public for their support, with Sukumaran saying, “Whatever happens, I know that me and Andrew are good people now”.

Hundreds of people braved the rain at Federation Square in Melbourne last night, where artist Matthew Sleeth, Supreme Court Justice Lex Lasry and journalist Mark Davis addressed the crowd, calling for “ampuni”, which is the most formal way to ask for mercy in Indonesia. Vigils were held around Australia last night, including in Sydney and Perth. MC Eddie Perfect opened the proceedings in Melbourne by saying that the vigil would not be passive, but an active way to show Sukumaran and Chan that they weren’t alone.

Sleeth and Perfect read out letters from Chan and Sukumaran, who both said they had been “blessed” despite the sentence. Chan called for people to remember the spirit of the campaign. “This campaign is about more than myself and Myu. It represents a second chance and forgiveness, kindness and help for those in a helpless situation. Mercy represents all of us here. Please don’t let this just be about myself and Myu but about others all over the world who need your help. ”

Sukumaran said the campaign made them determined to be better people.

“It has helped our families so much. It makes us even more determined to be better people and to do more to help people, to show more kindness like that which everyone has given us, especially our families.” 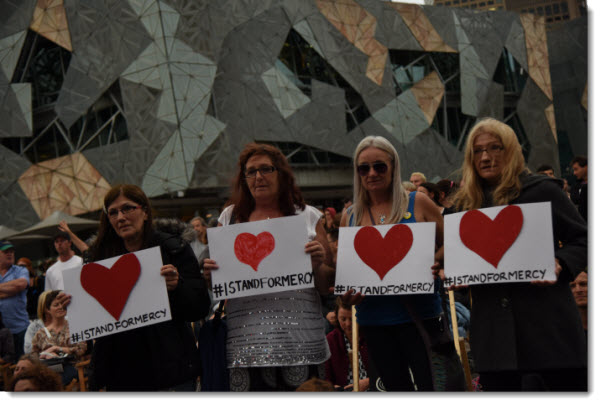 Opposition Leader Bill Shorten and Greens leader Christine Milne attended the vigil in Melbourne, which included musical performances by Clare Bowditch, Bob Evans and Missy Higgins. Higgins, who gave birth to her first child last month, dedicated her song “Forgive me” to the mothers of Chan and Sukumaran.

Supreme Court Justice Lex Lasry emphasised the ways in which the men had changed in ten years in prison.

Sleeth spoke about the ways in which Sukuamran and Chan had contributed to life in Kerobokan prison, comparing the productivity of the art studio they established in the prison to a TAFE.

“If these executions go ahead we will all be diminished, both Australians and Indonesians,” he said.

Matthew Goldberg from the Mercy Campaign told the crowd that the online petition asking for clemency for the pair had now grown to 200,000 signatures.

The crowd included many families and children, with one toddler wearing a bib that said “keep hope alive”. One attendee told Crikey that she attended out of a sense of justice, and while others said the vigil gave them a sense of hope as well as sadness. 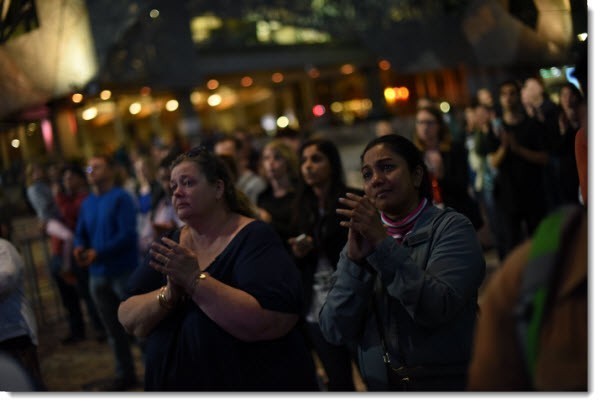 Given the news earlier today of the quashing of David Hicks’ terrorism conviction (and the PMs comment that “We did what was needed but, look, let’s not forget whatever the legalities, and this was essentially a matter for an American court dealing with American law. He was up to no good on his own admission,”) it’s worthwhile to compare Hicks’ situation with that of the two men currently facing execution in Indonesia. Why not replace the word American with Indonesian in the above sentence, and apply it to equally validly to them?

If Hicks had been sent off to a firing squad, would the then PM Howard and Foreign Minister Downer have made the same sort of threats to the USA that Abbott and Bishop are now making to Indonesia? I doubt it.

And how would Abbot react if a USA court-Hicks-execution situation arose under his watch? Can someone please ask him?

And now lets see the same energy and one vigil for each and every person who has suffered in the last ten years because of heroin intake. The real victims are those that partake of the heroin that is smuggled into our land. Where is the pity party for the real victims?

@mark hip grave you’re spot on, likewise Peterpan you have a valid point.

I’m about to ask a genuine question here. The punishment handed out to ‘wrong-doers’ is meant to deter others from committing the same crime. Who will be deterred by the execution of these two men?

It may be that few will be deterred. Fools do not look at consequences. However, Chan and Sukumaran were pretty much bad guys. I don’t much care for heroin smugglers and while I do not in general believe in the death penalty I am with Bill and Peterpan. Who lights candles for the grieving families of the OD victims?