Will the census get downgraded? ... watching Turnbull's every move ... Pyne looking for a new job?

No more census? Cuts to the budget of the Australian Bureau of Statistics have already claimed some wonderful types of research, but according to one tipster they are set to cut the mother of all statistical surveys:

“The federal government has had plans underway for the last few months to introduce legislation to cancel the next Australian Census, which would have been held in August 2016, and replace it with a cheaper household survey. However they are not planning to make this announcement until the May budget.”

We put that to the ABS but didn’t hear back by deadline.

#Malcolmwatch. After he appeared on Q&A wearing a salmon tie (or is it peach? It’s not blue, anyway), we’ve all hyper-vigilant for any sign that Malcolm Turnbull is secretly mounting a challenge to Prime Minister Tony Abbott. Now another tipster is seeing signs of a leadership challenge — Turnbull is paying for Facebook advertising to put his face in more newsfeeds. 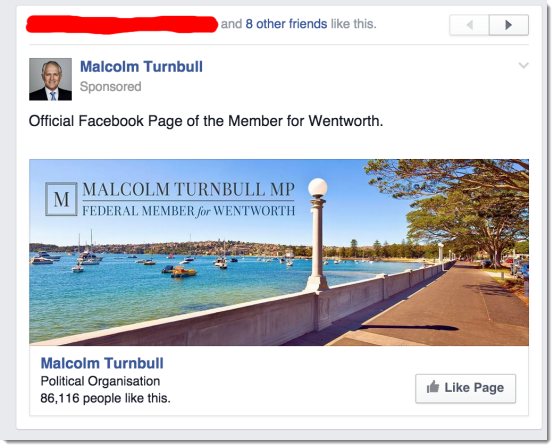 While it’s not unusual for politicians to spruik their pages like this, the timing is interesting. Ms Tips thinks Turnbull’s fancy font is very Point Piper, but the Communications Minister tweeted photos of himself on public transport again this morning, to remind us he is a man of the people.

Stop me if you’ve heard this one before. Heavy metal fans in Melbourne will be left high and dry this weekend after the organisers of Soundwave music festival didn’t inform the state government in time for them to organise extra public transport to the festival at the Showgrounds on Saturday and Sunday. Promoter AJ Maddah has called Victorian Premier Daniel Andrews a “lying scumbag” over the stuff-up, even though Andrews says the deadline was before Labor even took government. But, as one tipster pointed out to us, it’s actually Maddah who has a history when it comes to leaving his customers stranded. In 2012, the now-defunct Harvest Festival was left without trains to the Werribee site 40 kilometres away from the CBD because of track works on the train line. Like Soundwave, Harvest was an AJ Maddah-promoted festival.

Pyne forges ahead with negotiations. Victorian Senator John Madigan is everyone’s new best friend at the moment, as MPs from both sides of politics try to court his vote on the deregulation of higher education. Independent Cathy McGowan has been appealing to both Madigan and Ricky Muir’s sensibilities as rural senators when it comes to consider the legislation. Wetsuit enthusiast Christopher Pyne is also trying to appeal to Madigan’s interests, uploading this video of the two smithing at a Frankston high school. Madigan is a blacksmith by trade and is very passionate about the art of blacksmithing. To steal a pun from Madigan himself, were they “hammering education reform into shape?” He says he’s still considering his options on the policy. 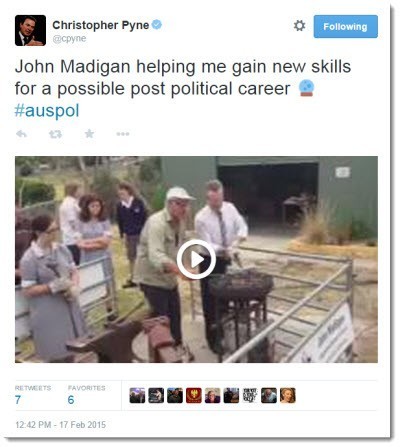 Jobs go, jobs appear. More disquiet at the Department of Immigration and Border Protection, according to an insider, where a range of high-level vacancies have just been announced and will soon be advertised to the public. It hasn’t gone down well in the department, where jobs have been lost as the Immigration and Customs departments combine.

Stop the slogans. Greens Senator Sarah Hanson-Young is trying to get a three-word slogan off the ground, but we think “stop the berries” isn’t going to get her very far. 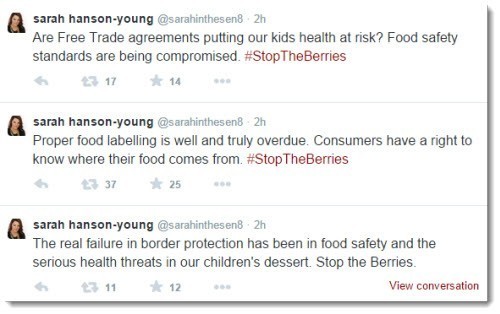 Customs warning on Bali. A caller to 2UE this morning said Australian Customs might revise its travel warnings to Indonesia and Bali following the controversy over the death penalty for Andrew Chan and Myuran Sukumaran. and that there may be a new advertising campaign on the way for the 2015-16 summer holiday season. The current warning level on SmartTraveller is “exercise a high degree of caution” when travelling to Indonesia, referencing terror threats in the region. It doesn’t mention anything about the death penalty. Vigils for the pair will be held at Federation Square in Melbourne and the C3 Church in Toongabbie in Sydney at 7:30 tonight.

Jacqui Lambie. Senator Jacqui Lambie is really enjoying being an independent senator, with no one to tell her when she sounds absolutely crazy. Yesterday she claimed responsibility for the PM’s decision to crack down on citizenship rules for those suspected of terrorism-related offences. She also called for Australia’s oath of citizenship to be changed to include the following line renouncing sharia law:

“From this time forward, under God, I pledge my loyalty to Australia and its people, whose democratic beliefs I share, whose rights, liberties and opposition to sharia law I respect and whose laws I will uphold and obey.”

‘under God’? Apparently Jacqui Lambie doesn’t think that Australians have the right or the liberty to be atheists.

I’d be annoyed if the next census is cancelled and replaced with a survey. I enjoy marking ‘no religion’ every 5 years.

A small observation. The colour of Malcolm’s tie was not “salmon”. It was sky blue pink, and therefore complied with the coalitions dress code.

I’m with you Wayne Robinson.
To be fair, does she expect new citizens to swear away their allegiance to halakhah (Jewish law) or any other religious law too?

The federal Canadian conservative government replaced the census with an optional survey, which has weakened planning and analysis considerably.

The latest attack on the ABS is just another symptom of this, and other recent Governments’, deep-seated fear of transparency and evidence-based policy, and a desire to govern through anecdote and superstition.