The devil wears Shahada: how IS uses radicalised women to market jihad

The increased use of female suicide bombers by Islamic State militants is, in large part, due to the increased media coverage they generate. 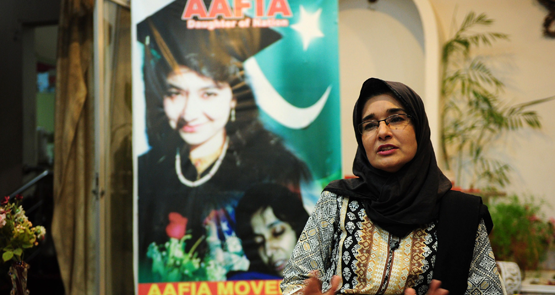 As an organisation, Islamic State knows the market value of women. This is evident not only by their trade in looted women, but in their offers to exchange foreign hostages for the release of two women who they have branded as their own — veiled jihadist pin-up girls Aafia Siddiqui and Sajida al-Rishawi.

Siddiqui is the Pakistani neuroscientist who is serving an 86-year sentence in the United States after being convicted of attempting to kill American agents while being interrogated in Ghazni, Afghanistan in 2008, while al-Rishawi was sentenced to death in Jordan after failing to detonate her explosive belt during a 2005 triple-bombing attack in Amman that killed 60 people.

Siddiqui holds enormous star power in Pakistan, where she is widely regarded as the innocent victim of an American conspiracy and where stories circulate about her mistreatment while in prison. The US-trained neuroscientist disappeared along with her three children in 2003 after being placed on an FBI global alert list. In 2004, she became the only woman on a list of seven most wanted al-Qaeda fugitives. US authorities claim that she was on the run with her al-Qaeda co-conspirators, until she reappeared in Afghanistan in 2008. She was taken into custody and supposedly managed to grab a rifle and fire upon her captors, shouting “Death to America!” Her supporters, however, believe that she was secretly detained by either the Pakistani or US authorities during those missing years.

No wonder, then, that IS should seek to associate itself with her brand. Last year, it offered to exchange the American journalist James Foley for her — an offer that the United States unsurprisingly declined to pursue. After broadcasting Foley’s execution, IS made a similar offer with regard to Steven Sotloff, with a similarly gruesome outcome. Siddiqui’s sister has disassociated the family’s campaign for her release from the proposed deals, telling Newsweek that IS was just trying to capitalise on Aafia’s cause.

Al-Rishawi lacks Siddiqui’s glamour, but on the other hand, as the reported sister of a close aide to the Abu Musab al-Zarqawi, she has an impeccable al-Qaeda pedigree. In 2005, she and her husband travelled from Iraq to Jordan in order to participate in a co-ordinated attack on three separate hotels in Amman. When her bomb failed to ignite, her husband pushed her back out of harm’s way before detonating his own device, killing 38 wedding guests. IS demanded her release first in exchange for Japanese journalist Kenji Goto and then for Jordanian pilot First Lieutenant Moaz al-Kassasbeh (who Jordanian officials believe was likely already dead).

“Jordan’s response will be earth-shattering,” said Jordan’s Information Minister after IS eventually released the notorious video showing al-Kassasbeh’s execution by fire. Hours later, the most obvious prime target for revenge, Sajida al-Rishawi, was hanged alongside convicted al-Qaeda operative Ziyad Karboli. But al-Rishawi’s execution may serve IS’ purposes at least as well as her release could ever have done. Analysts note that the escalated use of female suicide bombers is in large part due to the high volume of media coverage they attract in comparison to their male counterparts. In this regard, al-Rishawi’s “failed” suicide bombing comes as a spectacular success. Her martyrdom comes nearly a decade later than originally planned, but in public relations terms it has achieved more than she and her co-conspirators had ever dared hope.

All this is happening as the horrific treatment of Yazidi women and girls by their Islamic State captors adds another chapter to the global history of rape as a means of ethnic cleansing and symbol of conquest. Reports from Amnesty International and Human Rights Watch document systematic forced conversions and sexual slavery against captured women, including “giving” away young women to favoured flunkies or selling them to the highest bidder.

IS, then, enforces a particularly brutal form of patriarchy while staging high-profile rescue missions for select maidens-in-distress. This fits the pattern in which IS performs its own abuses as a gruesome mirror to those committed by its enemies. The murder of the pilot al-Kassasbeh was explicitly staged as a re-enactment of the deaths caused by aerial bombardment. And its answer to the international condemnation of the abuses it is committing against Yazidi women and girls is to place its own martyred and imprisoned heroines in the spotlight.

One thing you forgot to mention is that IS has instituted slavery on the basis that it was approved by Mohammed and legitimised in the Quran.

Thus while the rest of the world finds slavery abhorrent, particularly that of young women and children, Islamic State justifies it as entirely in keeping with the tenets of Islam.

Is it possible that the more ISIS tries to outdo itself in brutality and extremism the more its support will diminish? I expect the “Call Of Duty” commandos from basements in Sydney or London or Paris will continue to be attracted, but will the populations actually in the affected areas just decide to force ISIS into the sea?

Yep, the IS has shown abundant adroitness for successfully propagating their brand throughout the Muslim, and nn-Muslim world.

It makes you wonder where on Earth they got such professionals, and how they are able to carry out such vividly documented atrocities as “non-state” actors..

Inherently, all insurgent groups fragment. But the way in which IS comports itself also sets it onto a trajectory of self-destruction.

Islamic State’s lineage stems from al Qaeda in Iraq (AQI), then Islamic State of Iraq (ISI) led by Abu Musab al-Zarqawi. While not as brutal as IS, the ISI’s interpretation and implementation of Sharia slowly degraded their stature in Western Iraq. Ultimately this led to their expulsion from Iraq into Syria where it spawned into what we see today as the Islamic State.

That said, the Anbar tribes also saw a necessity to retain some ISI personnel knowing they would require them to leverage a Shiite dominated Government in Baghdad at a later date. However their duplicity has caused them far more misery than they expected. Perhaps this time round they will completely destroy the group, and its ideologies.

I can understand the attraction of jihadism to young men – never underestimate testosterone as stupidity fuel – but I am flabbergasted by the departure of many determined young western/european born women from the UK & France particularly for hell.