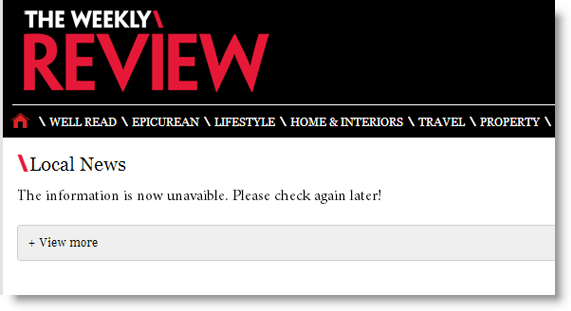 Journalists at the Fairfax-owned Weekly Review magazines have been told they will no longer write hard-hitting news stories, instead focusing on softer lifestyle content.

The unexpected change in editorial direction was conveyed to journalists in a meeting on Monday, with subeditors and designers on the magazines informed in further meetings on Tuesday. Staff meetings to discuss the shift are continuing — Weekly Review publisher Metro Media Publishing declined to comment to Crikey on the editorial direction until these were concluded tomorrow morning.

MMP was recently bought by Fairfax’s real estate business Domain, now headed by MMP founder Antony Catalano. The Weekly Review publications have always included a mix of lifestyle and news content, but the balance is shifting. Journalists say they were told, for example, to no longer cover muggings, as it doesn’t say “we love Melbourne”, and thus doesn’t fit into the new direction. The publications will also no longer be covering local sport.

Several reporters’ roles will change quite dramatically in line with the new editorial direction. But, they were told no redundancies would be sought or offered as a result of the shift.

The Weekly Review has, in recent years, fed copy on local events into The Age, which relies heavily on the group for local news stories. Journalists Crikey spoke to are concerned a shift to lifestyle-only content means the publications will no longer provide a valuable training ground for young journalists. Crikey understands change was justified on reader surveys MMP conducted, which showed readers had a preference for the lighter content. Also seen as pivotal to the change is new content director Emily Rayner, who recently joined MMP from Nova Entertainment and headed up the meetings with journalists.

Some insiders say the shift makes sense from a business perspective, but nonetheless describe it as a slap in the face to The Weekly Review’s journalists and a free kick to the group’s main competition, Leader Newspapers, which is owned by News Corp. And others questioned the wisdom of the direction itself. “They’ve chosen to employ a more digitally oriented strategy by cutting the content that was most likely to go viral,” one said. News scoops have been the biggest drivers of traffic for The Weekly Review online. The newsroom has not reacted well to the new direction.

The Weekly Review flourished under a largely unique model in the Australian media, with real estate agents buying directly into the publications that carried their ads. The “agent-equity model”, as it’s called, has been called into question by REA, part-owned by News Corp, and the major competitor to MMP-owner Domain, which claimed last week that this poses a conflict of interest by encouraging agents to put their ads in the magazine instead of wherever they’re most likely to achieve a beneficial result for the vendor. Fairfax bought a half-stake in MMP in 2012 and purchased the remainder of the business in January, after MMP bled Fairfax of millions in property advertising. Last week, Domain announced it was rolling out the agent-equity model interstate.

I wonder, Myriam, if you’ll begin a campaign to remove the similar problem to the Team Melbourne one you mention, namely the entrenched Team Crikey Collective?

NORMAN, NORMAN! Bitchiness suits you even less than your attempts at humour!

Another sad day for both journalism and community news. So much for community politics. Coverage by the Bayside Weekly Review of the Victorian State election was a refreshing complement to Murdoch’s Leader weekly. You could comment online on stories and have some kind of a discussion of local issues such as planning, transport and the environment. The TWRBayside was limited however, in that it did not have a letters section in the print edition. It is surprising how many people read these.

Soft lifestyle content, at Fairfax! Tell me it ain’t true… 😉