Media briefs: vote for me … defending Ferguson … Seven cleans out …

Comparing ratings to war dead isn't the most tactful way to spice up your TV review.

ABC defends review, and Sarah Ferguson. The ABC has responded claims that Sarah Ferguson breached its editorial guidelines in her interview with Joe Hockey on budget night 2014, saying that was far from the case. In an opinion piece on The Drum, head of editorial policy Alan Sunderland writes:

“I was startled overnight to read in the newspapers and social media that, apparently, the ABC had ‘ruled’ that a landmark interview Sarah Ferguson had done with the Treasurer Joe Hockey on budget night on 7.30 had breached ABC guidelines for bias. ‘ABC host breached bias rules,’ said the headline. Really, I thought? I think I might have remembered if that had happened. As the Head of Editorial Policy, I normally know when we have breached our policies on a matter as important as that.

“Let me assure you that, on this occasion, the problem is not my memory. Sarah’s interview with the Treasurer stands now, as it always has, as an excellent example of a strong news-making interview that the ABC was proud to air, and we hope there are plenty more like it. It has not been found to breach any editorial policies.”

Many had been unable to distinguish, Sunderland wrote, between a system of editorial reviews conducted by outsiders (the most recent one was conducted by former AFR editor Colleen Ryan) and rulings by the ABC itself.

Of course, the editorial review system itself has copped a bit of flak. In Crikey yesterday, Kerry O’Brien said the ABC shouldn’t be making its interviewers second-guess themselves during difficult interviews. “The ABC board risks creating a climate of self-censorship, sanitisation and timidity, which would seriously undermine the foundations of the institution’s independence,” he wrote.

O’Brien’s comments on the review system were echoed elsewhere, notably in a piece by former ABC presenter Quentin Dempster in The Sydney Morning Herald, who wrote:

“Ryan is a great journalist. She was asked to give her subjective views under ABC chairman’s James Spigelman’s external audit of editorial standards.

“With very great respect, this subjective audit is a daft idea, as the ABC is already subject to external oversight on its code of practice by the Australian Communications and Media Authority — let alone defamation, contempt and discrimination laws, federal, state and territory.”

Sunderland, however, writes that the ABC has no intention of abandoning the process:

“The ABC will not step back from the kind of honest and open scrutiny that more media organisations should do. We will carefully consider all feedback, whether we agree with it or not, and we will do that openly for the benefit of the taxpayers who fund us.”

ABC insiders say the reason the ABC is so trusted by the public is because it’s willing to be reflective about its own practises and invite outside criticism in a way few media organisations are.

But this week’s storm will have long-lasting repercussions. Colleen Ryan was commissioned by the ABC to give her opinion on its content. She did, and had her comments widely argued with and even disparaged by many of the profession’s most influential voices. No doubt it’s now a little bit harder for the ABC to find independent reviewers willing to give such frank assessment. — Myriam Robin

Vote for me. Around 50 Australian journalists are about to be given an opportunity to vote for who they think should be the new editor-in-chief The Guardian, as part of the staff vote that helps inform the decision by the Scott Trust on who will replace Alan Rusbridger. But luckily for their productivity, Emily Wilson, the editor-in-chief of Guardian Australia, says her journalists shouldn’t expect posters or emails from candidates imploring their vote. “It’s not that kind of election,” she told Crikey yesterday, to our barely concealed disappointment. But there will be speeches by the four candidates in London (presumably the Australian contingent will listen in remotely), and she’s hopeful of organising a Skype call-in with the four candidates, if she can navigate the myriad timezones of both the candidates and reporters.

Kath Viner, the founding editor of Guardian Australia and current editor of Guardian US, is one of four candidates who’ve put their names forward to the staff vote. The others are Emily Bell, a journalist and academic who since 2013 has sat on the board of the Scott Trust, Wolfgang Blau, director of The Guardian‘s digital strategy, and Janine Gibson, editor-in-chief of TheGuardian.com and the former head of the American edition. But they’re not the only ones with a shot. There are 26 candidates for the job in total, some external some already with The Guardian. Only the four above have put their names forward for the staff vote — winning guarantees the victor a place on the shortlist. Commentators say because of The Guardian’s internal quasi-democracy, it’s extremely hard for external candidates to get a look-in.

Around 800 journalists worldwide will get a vote overall, though, Wilson warns, the details are still being worked out.

When the vacancy was first announced, the best odds were on Janine Gibson to become the next editor. Since then they’ve shifted, with Emily Bell on odds of 2-1. — Myriam Robin

‘A fraud on its readers’. Peter Oburne, former chief political commentator for London’s The Telegraph, has spoken out on why he left, revealing what he says is a history of biased reporting. Oborne’s resigned in protest of The Telegraph‘s soft coverage of leaked HSBC files to win back the bank’s advertising ties. Oborne revealed this was not the first time The Telegraph had failed to report news involving HSBC. Oborne described The Telegraph’s coverage of HSBC a “fraud on it readers”:

“It has been placing what it perceives to be the interests of a major international bank above its duty to bring the news to Telegraph readers.”

In Oborne’s editorial, he dug up a history of examples of stories he and former banking correspondent Harry Wilson had written in the past involving HSBC. Those were either not published or removed due to unexplained legal concerns. One story concerned HSBC’s closing of one of Britain’s largest Muslim charities last year, the Ummah Welfare Trust.  As well as stories that were never published for the protection of key advertisers, Oborne pointed out stories that were buried and not given the prominence they deserved. This included last year’s coverage of the Chinese government denying British MPs entries into Hong Kong. Instead, The Daily Telegraph ran an op-ed with the headline “Let’s not allow Hong Kong to come between us”. Oborne called it “beyond parody”.

HSBC has put its advertising with The Guardian “on pause” due to the recent coverage of the Swiss leaks. — Crikey intern Abbey Casey

Seven cleans out. Crikey regulars will be unsurprised to learn Seven West Media has been forced to recognise the sharp slide in its share price and worsening outlook  for broadcast TV. To this it has cut the value of its newspapers and magazines as well. In fact it can be argued that the Kerry Stokes-chaired media company has had a mammoth clean-up, or been forced to do so by the weak prospects for broadcast TV and print media, which has been reflected in the collapse in the company’s share price in the past year. At the time it was formed in 2011 from the merger of Seven network and West Australian newspapers, Seven West Media had a value of $4.1 billion. At the close last night, the company’s value of $1.45 billion. This morning’s news on the asset write-downs (or impairments) merely reflects part of the $2.7 billion slide in value.

The share price has fallen from 2.16% to a low last month of $1.21, before bouncing back to last night’s close.

In its statement this morning, Seven West said “the impairment is an accounting adjustment that reflects a reassessment of the market outlook for growth” and the “$1.148 million of total impairment is non-cash in nature”. The impairments related to “significant items relating to predominantly the impairment of goodwill, carrying values of the company’s publishing businesses, impairment of equity accounted investments, recognition of onerous television programme contracts and redundancy and restructure costs”.

That’s a real clean-out, and it is unlikely there will be any write back in coming years because of the weak outlook for broadcast TV (no change in TV ad revenues now for five years) and an even weaker outlook for newspapers and magazines. The impairment of the value of licences refers to the value of the right to publish magazines such as Marie Claire in Australia. They are now longer as valuable.

Directors have declared an interim dividend of 6 cents a share and will maintain the full year figure at 12 cents a share (subject to there being no disasters). With a 35% stake, Kerry Stokes’ Seven Group Holdings will be the biggest beneficiary of that decision. Seven Group Holdings is due to report its interim results next week and will have to write down the value of its Seven stake, and probably the value of its Caterpillar franchises in Australia and China, according to some analysts. — Glenn Dyer

Journalism goes here. It’s far from the first time this has happened. Page 8 of today’s Age.

Ratings carnage. While we’re reading today’s papers, this opening in the Daily Telegraph is rather something. Cheers to Mumbrella for spotting it. 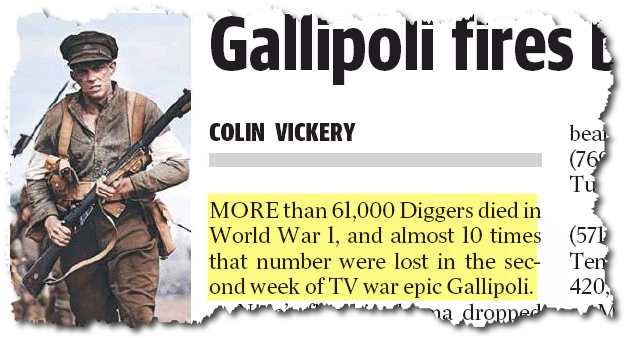 Video of the day. With Chris Bowen under fire for not knowing the tax free threshold or the average tax level (we figure that’s no worse than Joe Hockey’s claim that Australians pay 50% of their income in tax when the actual figure’s around 20%, but anyway), you might think journalists would be across what it was that Bowen was being criticised for not knowing — after all, they have time to look it up. Not so ABC News 24’s Joe O’Brien, who ended up looking every bit as bad as Bowen, but with less excuse … 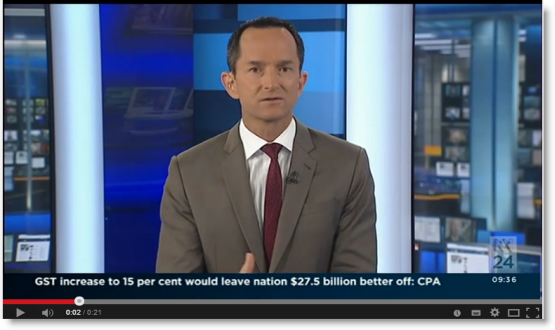 I wonder how many of the 600,000 lost viewers from the first episode of ‘Gallipoli’ registered for Stan last Monday night? After there was extensive repeated advertising during the episode that all episodes are now available. And there’s a free 30 day trial available.

‘Gallipoli’ is pretty good, despite being historically inaccurate at times. It was a sickle Moon on April 25, 1915 (it was actually almost a full moon). General Bridges didn’t die on Gallipoli as shown matter of factly in the 2nd episode (he died several days later of gangrene on a hospital ship – he was one of the only two Australian soldiers dying of wounds in Europe during the Great War to be buried in Australia). And in the 5th episode, the fourth wave of the attack at the Nek was signalled with a whistle – it was to be signalled with a wave of the arm because the noise level was too loud for a whistle to be heard. And one soldier inadvertedly waved his arm.

Dempster is right as shown by the ABC’s precious and defensive response to an expert opinion sought and received.

The quality control problems with hard copies of the Fairfax papers are nothing compared with their iPad editions. Typos, repeated paragraphs etc are ten norm.
Last Monday the SMH’s opinion page wasn’t updated from Sunday until lunchtime. My complaint received a typical automated reply, followed up with a bland request to contact them if the problem persisted.

Admittedly, it’s probably just me, but I don’t think that :
[“Airing/expressing alternate views (to Rupert Murdoch’s edited conservative bent PR empire and the rest of the one-eyed conservative commentariat editing the view of reality punters get) of what’s going on in the world = Left Wing Bias”?]

Well it’s not just you, Klewie but you’d all fit into a telephone box.