Abbott lies about data retention while the media cuts and pastes

Tony Abbott has raised the data retention debate to a new height of hysteria, and the media is failing to protect itself. 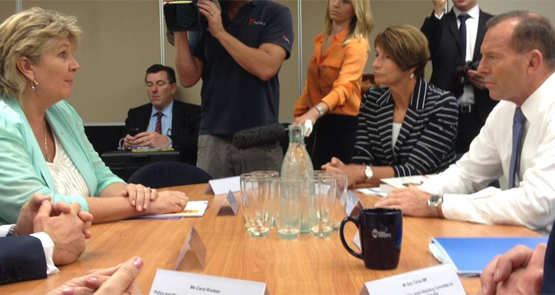 The Prime Minister has elevated the debate over data retention to a new level today by declaring data retention “absolutely critical” to catching child sex offenders, while appearing at a Queensland event with the pro-surveillance Bravehearts group.

Abbott wants the mass surveillance schemed rushed through Parliament in the next four weeks despite there being no definition of what data he wants to force communications companies to retain, and having no idea of the cost it will impose on taxpayers and consumers. The legislation is currently being considered by Parliament’s Joint Committee on Intelligence and Security, chaired by Victorian Liberal MP Dan Tehan, to which Bravehearts made a submission supporting data retention.

In a remarkable and blatant corruption of process, Tehan joined Abbott at the Bravehearts photo opportunity, suggesting the committee was happy to provide publicity for data retention advocates.

But Abbott’s upping of the stakes coincides with yet more evidence from overseas that data retention simply doesn’t work. This week, a Dutch government agency ruled that an attempt to amend data retention law was unjustified. The Netherlands data retention law, like all those in European Union countries, was voided by an EU court decision last year ruling the original EU data retention directive was illegal. Since then, a number of countries have sought to overhaul their laws. However, the Dutch Data Protection Authority this week ruled that the amended version shouldn’t be legislated because, despite data retention being in operation for over four years before being annulled, Dutch law enforcement agencies had been unable to demonstrate that it worked.

The Dutch experience adds to an increasingly lengthy list of examples where evidence shows in that mass surveillance has done nothing to improve counter-terrorism or law enforcement outcomes — something that Australian officials have confirmed by their own inability to produce evidence that data retention will do what they claim it will.

Moreover, Abbott’s hysterical invocation of child pornography as a crime where metadata is “absolutely critical” is contradicted by the arguments of law enforcement bodies. The AFP has long been complaining that it is becoming more difficult to catch child sex offenders not because of communications companies deleting data but because child pornography users rely on encryption and anonymisation tools like Tor to access material anonymously. “What we have recently uncovered — this is within the last six months, probably this year — is people starting to use Tor to transfer child abuse material, making it increasingly more and more difficult for law enforcement to get in and do their work,” AFP high-tech crime head Neil Gaughan lamented as far back as 2012.

Using anonymisation services means that when law enforcement bodies find and examine servers containing child pornography, the IP addresses recorded as accessing the material can’t be matched to ISP accounts via data records. Recently the US Department of Justice was outed as having lied about Tor when it claimed, absurdly, that 80% of traffic on the network was child pornography. In effect, law enforcement bodies want to have it both ways — claiming data retention is critical to catch child sex offenders, while attacking services that render data retention useless for catching child sex offenders.

Abbott’s personal position is all the more absurd given in 1997 he famously provided a character reference for a paedophile priest, whom he described as “an extremely upright and virtuous man” and a “beacon of humanity” and defended the discredited George Pell’s handling of sexual abuse cases within the Catholic church. Just last week, Abbott dismissed copious evidence of dozens of instances of sexual assault of children detained by Australia compiled by the Human Rights Commission as “blatantly partisan”.

But what’s every bit as disturbing is the failure of the media to accurately cover the issue. Fairfax and News Corp journalists were carefully briefed in advance about today’s visit, including Fairfax’s David Wroe. Wroe is a good national security correspondent on other matters, but on data retention he has repeatedly run government briefing virtually verbatim. Today’s backgrounded report on the Braveheart event runs Abbott’s claims about how critical data retention is despite the wealth of material in the public domain contradicting it, and officials being unable to justify it in recent committee hearings.

It’s unfair to single out Wroe, though. Unlike the “special intelligence operation” provisions legislated by the government last year, where the possibility of journalists being jailed for a decade eventually drew protests and criticism from the media, including those normally cheering for the government at News Corp, the mooted introduction of data retention has been met with silence by journalists. Data retention is a far more direct threat to journalists and their sources than being jailed for revealing a “special intelligence operation”. The chilling effect of data retention laws on journalism has been detailed in the UK, where the media as a whole launched a “Save Our Sources” campaign.

In contrast, a supine media here has mostly acted as stenographers for a government that can’t explain what data it wants retained, how much it will cost (Abbott’s finger-in-the-wind figure today was $400 million) or what good it will do. The failure of senior journalists to speak out has been particularly disappointing and a failure of industry leadership, especially compared to the response of their British counterparts.

And even if journalists don’t want to speak out on something that directly threatens their craft, at the very least they must stop being party to the government’s deception of voters, by verbatim reporting of claims for which there is no evidence.

So, “If you don’t buy Toady’s Data Retention you must be a paedophile!”?

Most of them gave Abbott a free ride up to the election, so whats going to change now? Trouble is, as you point out, they only seem to get upset if its something that applies to them directly – no self-interest there then!

I was alarmed — and immediately became alert — when I read Crikey’s attention grabbing headline about our P.M. lying. I wondered what on Earth is happening to political integrity?
Then I read Crikey’s “evidence.”
You assert that someone saying “data retention (is) ‘absolutely critical’ to catching child sex offenders” is lying. I’m curious as to which ‘dictionary’ you believe you found this odd use of lying?
Your attacks on the Government’s approach to improving our surveillance capacities to fight increasing dangers from Terrorist murderers would give comfort I’m sure to Terrorists, even if it didn’t please most ordinary Australian citizens; but I forgot — the Crikey Collective rarely shows much interest in the views of such lowly sectors of Australian society, does it.
I’ll concede that I am perhaps expecting too much of the Collective’s ability to notice the odd nature of some of your ‘arguments’. You say, for example:
“Abbott’s upping of the stakes coincides with yet more evidence from overseas that data retention simply doesn’t work”, and to ‘substantiate’ this claim report, “This week, a Dutch government agency ruled that an attempt to amend data retention law was unjustified.” Even the poorest Philosophy students I encountered in the 1960s (admittedly when University standards weren’t as low as now) were unlikely to miss such a blatant non sequitur.
You make the philosophically quaint claim about “an increasingly lengthy list of examples where evidence shows in that mass surveillance has done nothing to improve counter-terrorism or law enforcement outcomes.” Why doesn’t Crikey phone a friend (who’s reasonably well educated in the relevant disciplines) to seek help?
There are more examples of the inept handling of these issues, but I’ve never believed in setting too much homework, no matter how badly there’s a need for it.

It appears Abbott has been to the George Brandis crash course on megadata. On this morning’s TV news we had an eerie sense of deja vu as he likened the data to be retained to the information on an envelope once stamped by Australia Post. I strained to recall where I’d heard that simpleton – oops – simplistic explanation before…

I’m willing to bet Barnaby Joyce’s house on Peta Credlin grounding the PM from making any dates with David Spears on SkyNews.

What is it with this PM’s propensity to seek out ‘fringe’ opinions supporting personal ideologies? Why is his wife front and centre? Why does the Australian print media fold into a foetal position when it comes to National issues of critical concern to the Electorate?

Why is it Australian Business remain quiescent on issues of mass surveillance or enforced data retention? Do they imagine over time they or their activities will co-exist, achieve immunity? Why do Australians accommodate/continue to permit a corrosive weakening of societal values?