Why is the Australian embassy in Indonesia unhappy with a journalist? ... the ALP gives supporters comebacks but no zingers ... and gratuitous pictures of a puppy ...

Scholarship murmurs. We received this from an insider saying all was not well in the Indonesian embassy in Jakarta:

“Australian diplomats in Jakarta are fairly busy at the moment, and their workload hasn’t been helped by the recent awarding of a scholarship named in honour of their much loved former colleague, Elizabeth O’Neill. Turns out this year’s Elizabeth O’Neill Journalism Scholarship was awarded (at the wishes of the Foreign Minister’s office) to a reporter who didn’t even bother getting a complete application submitted on time. To make matters worse the young journalist has so far also failed to tell Embassy officials what she’s planning to do with the scholarship, putting a lot of pressure on staff who are trying to arrange her itinerary in Indonesia. Diplomats are also unimpressed that the journalism prize went to someone who’s recently written puff-pieces about the Minister, rather than a person genuinely interested in reporting Indonesia.”

“The annual Elizabeth O’Neill Award winners are selected by the Board of the Australia-Indonesia Institute, an independent advisory board of eminent figures in education, media, medicine, the arts and law, and Indonesian politics and society. The due date for applications was extended until 24 November due to the limited number initially received. The Board considered applications at the 79th Board meeting in Darwin on Tuesday 2 December 2014 and made the final decision on the winners. The Foreign Minister had no involvement in the selection and decision-making process.”

We also asked Bourke about the comment that she has only written “puff pieces” and hadn’t completed her application, but didn’t receive a response before deadline.

Sky-high message. To mark the one-year anniversary of the death of Reza Barati on Manus Island, a group of “unaligned individuals” have crowdfunded two messages to be written in the skies above Sydney and Canberra. Residents of the cities will be able to see “Shut Down Manus” over Sydney Harbour at 1pm and “Close Nauru” over Parliament House in Canberra at 3pm. The group raised the funds for the project on crowdfunding site Pozible, reaching their original target of $5200 in two days, and ending the six-day campaign with a total of $9700, allowing them to commission the writing over Canberra. More than 300 people contributed to the campaign, with donations ranging from $3 to $200.

Life advice from the ALP. Labor supporters received some helpful life advice from national secretary George Wright last night as the party launched “how to talk to your Liberal mate“, in fancy website form. It features lines that are supposed to be typical opinions of Liberal supporters such as “Tony Abbott is taking pressure off the cost of living” and provides a comeback with references to media articles to back up the point. The email got Ms Tips excited about the prospect of Labor-style comebacks — would the website be a repository of Bill Shorten zingers? We should be so lucky — there are no zingers to be found. The sections cover topics like education, the economy, and broadband, but we thought there was one big issue missing: “how to talk to your Liberal mate when someone with silver hair in the party is making a not-so-subtle attempt to oust the sitting prime minister”. We’re guessing that will be in the next edition then?

What if it were Paula, not Paul? Today’s Daily Telegraph features a sincere op-ed by Gemma Sutherland asking Mark Scott and the ABC to rethink the decision to dump coverage of women’s sport after the most recent round of budget cuts. Sutherland writes:

“I wonder, though, if Mark was actually a Marcelle, if the outcome would be the same? Mark’s going to axe coverage of basketball and football. The ABC has covered the Women’s National Basketball League for 35 years. And if you think it doesn’t matter, you’re wrong. As a junior basketball player, I watched the WNBL on TV and aspired to be one of them. When remarkably that happened — and I played against those women I had watched on TV — the feeling was incredible. The spark of inspiration I got from watching those games shaped every aspect of my life, and I know that effect still happens today.”

While we are concerned about the trend to change a man’s name to female version when calling out sexism, Ms Tips completely agrees with Sutherland. We just wish her own editors would read it and take notice — today’s Tele didn’t have a single article about women’s sports — the only mentions were in the scoreboard section.

And while we’re on the topic… It’s not often Crikey feels pity for The Daily Telegraph, but spare a thought for the unfortunate Jennifer Sexton. Sexton, or more likely her editors, decided to do a hatchet job on shadow treasurer Chris Bowen yesterday by painting him as out of touch on Australia’s debt. “Economists refute Chris Bowen’s debt dismissal: Australia facing a ‘full blown’ crisis” was the headline prepared for the story. Only trouble was, Sexton evidently couldn’t find an economist to help her out. The only well-known economist quoted in her story was AMP’s Dr Shane Oliver, who specifically contradicted the whole tenor of the article, saying “the extreme view that we have a major debt problem is wrong and there is an element of rhetoric in that”. Not bad for a story headlined “full-blown crisis”. The story also quoted PwC tax adviser Paul Abbey, who also contradicted the story by saying “at our current debt level right now it is not alarming”. Only currency forecaster Clifford Bennett did the right thing by Sexton and gave her “full-blown crisis” although Bennett did say it was, in a rather unfortunate mixed metaphor, “warming up on the sidelines”. How something “full-blown” could just be “warming up” isn’t clear, but at least he gave her a money quote, so to speak. But where were the big four bank economists? Where was Saul Eslake? Where were any of the regular market economists who are happy to opine to the media? Did they not return Sexton’s calls? Or did they just give the wrong answer?

Canberrans avoiding Indonesia already? Canberrans turned out in their thousands over the weekend to attend the 19th annual multicultural festival, which celebrates Chinese New Year as well as the many other cultures that make up the Canberra community. A tipster noticed however that one stall was looking decidedly ignored — the Indonesian stand. The tipster thought perhaps festival-goers were making their feelings known about the Indonesian government’s continued refusal to grant clemency to Andrew Chan and Myuran Sukumaran. Vigils will be held for Chan and Sukumaran in Sydney and Melbourne tomorrow night, the venues are yet to be announced.

Rupert has a heart. Followers of Rupert Murdoch’s blog would have noticed that the media mogul has made an addition to his family, adopting a puppy last week as an early birthday present. The dog, a golden doodle, doesn’t have a name yet, but we’re sure there are many ideas. The photos of Rupes with his new bundle of fluff is almost enough to melt our hearts (almost). We do hope that Puppy Murdoch visits Australia the next time Murdoch Senior pays us a visit — we imagine he would make great friends with Gerard Henderson’s dog, Nancy. If Puppy Murdoch only wants to be friends with other poodle cross-breeds he could have a play date with Julia Gillard’s dog Reuben or Stephen Mayne’s puppy Daisy (see Daisy in this video here). Maybe they could build some bridges. 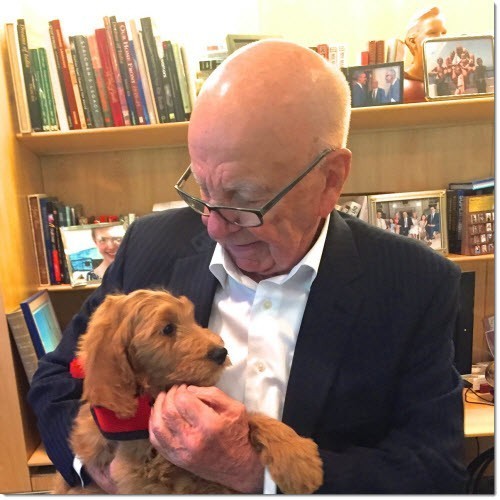 The Indonesian stall did look rather neglected at the Multicultural festival but I strongly suspect that this was more to do with the lack of food and beer on offer. The Chinese cultural tents were similarly sparse. Canberra strongly prefers culture it can consume orally.

FFS Crikey, are you barking mad? Of course Rupert does not have a heart. First Dog on the Moon would never have let you get away with this bollocks. You can only adopt a puppy from a shelter, otherwise you went shopping for one. Doodles come from puppy factories, like the one shown in this video, among many others: https://www.youtube.com/watch?v=ttNL5UgOM4w

Because people keep putting money into the hands of cruel puppy farmers by buying puppies from petshops, online, newspaper ads etc, 1.2 million homeless dogs and puppies are put down every year in the USA. In Australia, about 500,000 dogs and cats become homeless every year and half of them are put down.

So Murdoch, Gillard, Mayne: if you did not get your puppy from a shelter, and you did not personally inspect the breeding premises, you can be 95% certain your puppy was born in filth and misery in a puppy factory and you supported a very cruel industry with your wallet.