Andrews says full steam ahead for Melbourne Metro — but is it all hot air? 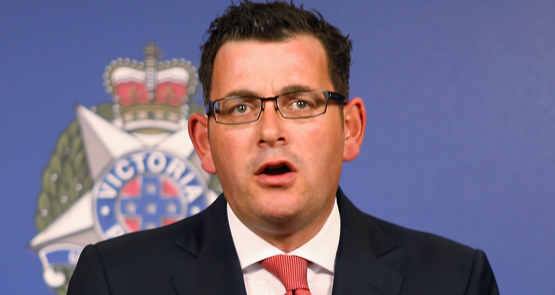 As per his explicit election promise, Victoria’s new Premier, Daniel Andrews, yesterday announced the beginning of work on the revived Melbourne Metro rail tunnel originally proposed under the Brumby government.

Design and engineering work on the twin nine-kilometre tunnels under the CBD was well advanced in 2010 when the Brumby government lost office. Further preparatory work continued for a period under the Baillieu/Napthine government, but the project was eventually amended to follow a different route and renamed the Melbourne Rail Link.

The CBD tunnel is a very important project for Melbourne because limited rail capacity in the city centre is a key constraint on the capacity of the metropolitan-wide rail system. It’s primarily about making the existing network operate better, rather than extending coverage or promoting urban renewal.

Demonstrating that too much hype is never enough in politics, the Premier said the project would give Melbourne a public transport network “equal to those in cities such as New York, London, Paris and Hong Kong”. Not to be outdone, Transport Minister Jacinta Allan said: “If we don’t build Melbourne Metro Rail now, our public transport system will grind to a halt.”

While those claims are just silly, there are a number of important issues to think about regarding the Melbourne Metro:

In strictly engineering terms, the Andrews government could make a substantial start on the project in this current (four-year) term, provided it sticks to the current design. A lot of the engineering work was done under the Brumby and Baillieu/Napthine governments.

The various approvals required might routinely take up to two years, but as the Napthine government’s handling of the East West Link showed, this process can be accelerated if the will and enthusiasm is there.

The problem for Andrews is finding the money. His task will be even harder if the sale/lease of the Port of Melbourne doesn’t realise all the funds needed for the government’s signature level-crossing removal program, or if the cost of cancelling the East West Link contract is as high as many expect.

The upshot is it’s unlikely construction of the Metro will get underway in a meaningful sense until the government’s second term (i.e. 2018-2022). That would most likely see completion of the tunnel sometime in 2026-30.

If the electorate’s apparent preparedness to throw out governments after one term continues, the result could be Melbourne Metro never starts. It would be terrific to see a bipartisan approach. However, that seems a tall order because this is one of those projects where the opposition has a distinct alternative solution to the same problem (i.e. it has Melbourne Rail Link).

This is a big and strategic investment, so I’d like to see the government also assess other possible solutions for expanding rail capacity (including the Melbourne Rail Link) and take account of the best of all of them. But I recognise the Metro is an explicit election promise.

The key political imperative for Andrews is to find the money and get digging. The pressure needs to be maintained on the federal government. He should also give serious consideration to requiring those who will benefit from the project to contribute to the cost; the most prospective candidates are city centre businesses and organisations.