Will children in detention still get a Royal Commission? ... Panic at The Oz, but not Business Spectator ... the protest that wasn't a protest ...

Legal academics rally behind Triggs. Fifty legal academics have signed a letter of support for Human Rights Commissioner Gillian Triggs, blasting the government’s criticism of her and the Forgotten Children report. The letter says that attacking people like Triggs threatens democracy:

“A well-functioning democracy requires that the executive respect the work of independent public institutions established by Parliament to perform specific functions even if it does not agree with specific positions adopted by them.  Where this independence is threatened by politicised attacks on the office holder, our democratic system is jeopardised.

“The Prime Minister has labelled this Report as a ‘blatantly partisan political exercise’ and a ‘transparent stitch-up’. Neither the Prime Minister nor any other member of the government has pointed to any factual errors in the report; their concern has been to attack the timing and motivation of the report and to seek to assign all fault to the other side of politics. But the question of responsibility for violations of Australia’s obligations under international law goes beyond politics.  The Commission has consistently made findings of breaches of human rights in relation to asylum seekers over the last twenty-five years under governments from both sides of politics. Given the serious mental health impact of our immigration detention policies on children as young as two, serious questions arise as to the past and ongoing responsibility of employees and officials of the Australian government for the prolonged suffering of children held in circumstances controlled by our government.”

White powder at the Oz — not that type. We hear that last Tuesday was a day of drama at the Melbourne office of The Australian, where the office was evacuated after the office manager opened a letter that appeared to contain anthrax. The substance fortunately turned out to be nothing more than talcum powder, but the office was evacuated for four hours while an investigation took place. We hear from a tipster that while the Oz‘s employees had to leave their desks to keep safe, their compatriots at Business Spectator remained at their desks, working away despite the risk. Our tipster seemed to think that the Oz‘s staffers didn’t care too much about the fate of their Business Spectator colleagues, but looked after themselves. Another source tells us that it wasn’t like that at all, that two emails were sent warning staff, and that Biz Spec‘s workspaces were actually quite a distance from the threatening powder. Plus Biz Spec had a newsletter to get out — journos don’t stop for much. A News Corp spokesman told us the company wouldn’t comment on security issues.

Wrong place, wrong time. It seems that the numbers of Liberal MPs who walked out of the House of Representatives during Bill Shorten’s Closing the Gap speech might have been inflated, with some backbenchers telling media that they weren’t protesting, they just had somewhere to be. Angus Taylor and John Cobb have both spoken out to clarify their reasons for leaving. Taylor said his leaving was just a mere coincidence, and he wasn’t even aware of the protest and didn’t notice anyone else leaving. Cobb’s spokesperson told Central Western Daily the MP had left due to a prior engagement. But Victorian member Russell Broadbent was one of the first MPs to publicly state his purpose of protest, telling the Sydney Morning Herald “the people of Australia are calling out for leaders who can rise above the fray”. Ken O’Dowd, Andrew Nikolic and Melissa Price also said they had walked out in protest. Taylor told the Gilbourne Post that he was now banned from leaving Parliament in case it caused a stir. Taylor didn’t tell the Post who had given him that instruction, but we’re sure there are many in the Liberal Party who feel that backbenchers caused more than enough difficulty last week.

Best leaks. As you may have gleaned from our shiny new website, today marks the 15th anniversary of Crikey explosive entry onto the Australian media scene. To commemorate this emotional anniversary — and still waiting on that cake — Crikey has elected to reveal for the first time pictures of a suitably sombre Marina Go giving the infamously unattainable Blue Book of News Corp the burial it deserved. This book, charting the slumming fortunes of Murdoch’s media empire in Australia, painted a bleak picture of sagging revenues and poorly-performing papers propped up by tabloid sales — a far cry from the optimistic line being peddled to its shareholders. You can read more of Crikey‘s best leaks, scoops and exclusives over 15 years of solid gold shit-stirring here. 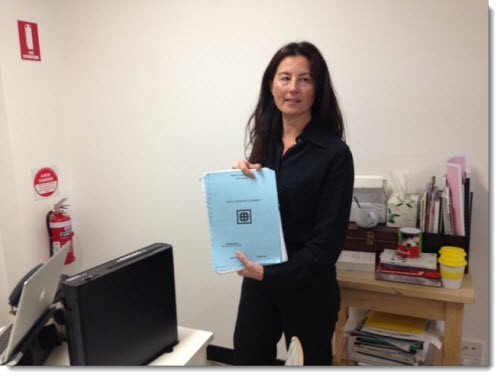 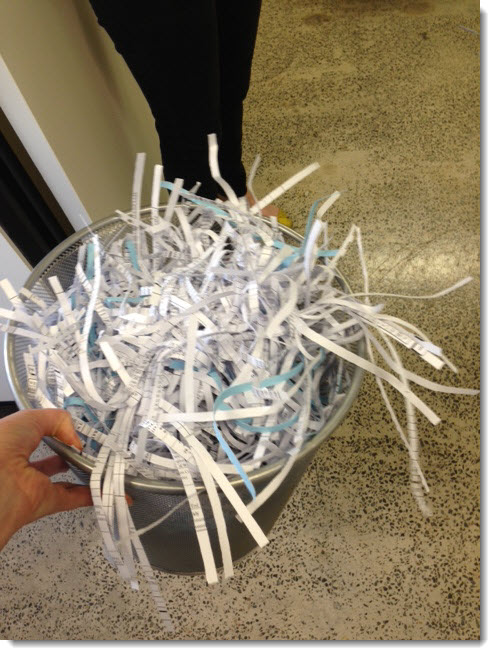 Crickey.com gets sued. As we took a trip down memory lane, we also searched the archives, much of which were legal letters threatening defamation suits against founder Stephen Mayne. While listing them all would take all day, we thought you would particularly enjoy this one — dated March 8 2000, it’s from the one and only Eric Beecher: 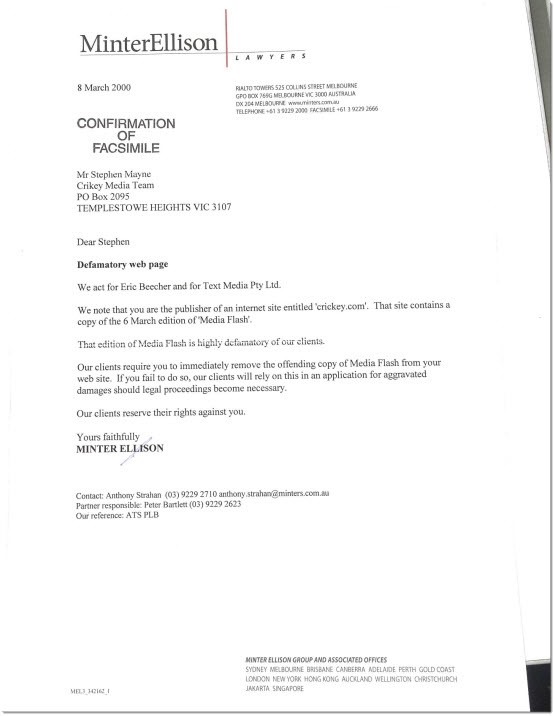 That’s not cricket. The opening of the Cricket World Cup on Saturday was a happy affair if you are an Australian supporter, less so for members of the Barmy Army. While the relevance of the 50 over form of the game has been debated as Twety20 matches become ever-popular, it seems the ICC has taken on some of the more flashy elements of the shorter form of the game. Saturday’s match featured fireworks between innings and fire cannons to mark every boundary and wicket. As the match wore on, the fire cannons seem to run our of fuel at about the same rate as the English team’s hopes faded. Our tipster noticed that late in the game, when England’s chances were all but dashed, the fire cannons in front of the Great Southern Stand failed altogether — it’s as if they knew that even a boundary or two wouldn’t save the poms then. “It was like pity fire,” our tipster said.