The coup that delivered power to a national security elite 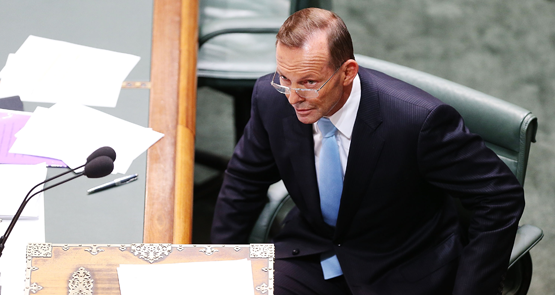 On the evening of July 14 last year, a Labor backbencher rose in the obscurity of the Federation Chamber to discuss terrorism laws. The counter-terrorism raids of September were still months in the future, the Sydney siege perhaps a half-formed plan in the fevered brain of Man Haron Monis; Omar al-Kutobi and Mohammad Kiad just another two Sydney men. The speaker was Victorian MP Anthony Byrne, who’d been chair of Joint Committee on Intelligence and Security under Julia Gillard. Since the election, he’s been deputy chair. He told the chamber:

“I urge the Attorney-General … to bring all of the suite of powers that the intelligence agencies have been asking for for some period of time, including with the previous government, to the parliament at its earliest opportunity … because powers of the magnitude proposed in this report need appropriate consideration so the citizenry’s view can be taken into account. It is vital that these powers be brought before the parliament sooner rather than later. I do not want to see data retention debated in this chamber and the chamber below after an event has occurred on Australia’s soil.”

As it turned out, this was a perfect prediction of what would transpire: the government’s delay on counter-terrorism reforms meant some of the most significant extensions of security agency powers in Australian history have been or are being “debated” in a febrile environment of terrorism.

As he faces political extinction, Tony Abbott has turned to national security in order to survive. He has deliberately trashed the carefully developed “Team Australia” bipartisanship on national security that was a feature of his approach to the issue last year, and is now trying to link Labor to terrorism. Yesterday he went even further and appeared to flag a comprehensive overhaul across legal rights in Australia in statement next Monday to remove the basic principle of innocent until proven guilty.

What Abbott’s desperation to cling to power hides, however, is the extent to which it is not Abbott, or the Liberal Party, who is truly in charge here, but a small clique of security bureaucrats who now have virtually unquestioned power both to conduct national security policy and to extend their own powers in that sphere.

The public face of the clique are the senior executives of the Attorney-General’s Department, the Australian Federal Police and ASIO. All three agencies are headed by relative newcomers, but all three agencies wield significant institutional power behind the scenes. The rest of the clique is hidden from view — they run agencies such as the Australian Secret Intelligence Service and the Australian Signals Directorate, which face no public accountability of any kind. Together they form the upper echelon of the “Australian Intelligence Community”.

This bureaucratic clique can now demand anything they want, and they will get it. ASIO and the AFP were gifted an additional $600 million over four years in 2014, in addition to the $2.6 billion annual allocations those agencies and AGD receive. The government has rushed significant expansions to security laws through parliament at their request. Preventative detention orders, specifically recommended for abolition by the former Independent National Security Legislation Monitor Bret Walker, were expanded, while other Walker recommendations were accepted without question. Data retention laws, which agencies tried and failed to convince Labor to introduce, are being rushed through despite the  inability of the clique to provide evidence that they will benefit law enforcement or counter-terrorism.

Several factors have coincided to hand unprecedented power to the clique. Tony Abbott’s desperation; the fact that, unusually, a former member of the clique, one-time ASIO head Paul O’Sullivan, is the Attorney-General’s chief of staff; the disastrous continuing consequences of the Iraq war that Australian intelligence agencies encouraged Australian to participate in. But its power also has a systemic base. The clique operates with minimal oversight, without the normal accountability mechanisms that other public servants face. Revelations from Edward Snowden that ASD had been, in contradiction to the Prime Minister’s claims, engaged in commercial espionage were simply ignored by both the government and the opposition. Agencies like ASIS or ASD have no publicly recorded parliamentary oversight at all. The AFP and ASIO hide behind claims of “operational matters” on the rare occasions when they face detailed probing at Senate estimates. The supposed watchdog of the security community, the IGIS, point blank refuses to answer questions from parliamentarians.

“This is little short of a bureaucratic coup by the most secretive, least accountable officials in the government.”

Parliamentary oversight of the clique is supposed to be provided by JCIS, though the legislative remit of the committee is limited. The current committee, under the chairmanship of Liberal backbencher Dan Tehan, has sought to expand its role in terms of overseeing legislation and extending scrutiny to the AFP. That push for expansion, however, was mainly driven by the now-departed John Faulkner. Faulkner left behind a bill that would significantly expand the operations of the committee, making it more like the congressional intelligence oversight committees in the US or the Intelligence and Security Committee at Westminster. Labor is still mulling whether to push forward with Faulkner’s bill.

The problem with even an expanded, more wide-ranging JCIS is that it relies heavily on having the right people on the committee, and you can’t guarantee the right people will always be on the committee. Tehan has been a competent chair but too inclined to roll over to the government, conscious that his performance may affect his chances of future promotion. Labor currently has two shadow ministers on the committee for the data retention inquiry, shadow AG Mark Dreyfus and opposition communications spokesman Jason Clare. Both have performed well in the data retention hearings, but as part of Labor’s shadow cabinet, both are tied to the party leadership in ways that potentially compromise a truly independent committee role.

Worse, JCIS appears ineffectual. AGD officials have treated the committee with contempt, telling them they won’t be getting metadata definitions or costings for data retention before the committee has reported, or even before the deadline Abbott insists the data retention bill must be passed by. If other bureaucrats treated committees like AGD officials have treated JCIS, all hell would break loose. But the security clique can do so with impunity.

Impunity also extends to external oversight. Far from revelations that ASIS bugged the East Timorese cabinet a decade agao leading to a royal commission, the whistleblower who revealed it was raided by ASIO on the orders of Brandis and had his passport seized to prevent him giving evidence overseas, and both he and his lawyer are under threat of prosecution. The fact that the perpetrator of the Sydney siege was removed from surveillance by ASIO was determined to only require an in-house, desktop inquiry by the heads of Prime Minister and Cabinet and NSW Premier and Cabinet, rather than a genuinely independent inquiry. Indeed, the Sydney siege inquiry, far from providing an opportunity for genuine oversight of the failings of security agencies, is likely to lead to still more extensions of their powers. As with the Iraq debacle that is reaping rewards for them a decade later, the clique wins no matter what.

The clique also uses authorised leaking to maintain its power. A number of journalists stand ready to act as stenographers for information leaked to support the agenda of agencies. As the case of the whistleblower on East Timor demonstrates, leaks that aren’t in the interests of the government or the agencies are ruthlessly pursued, But authorised leaks are never investigated. In late 2013, when new Communications minister Malcolm Turnbull was publicly suggesting Labor’s ban on Chinese communications firm Huawei supplying NBN materials could be overturned, intelligence officials leaked details of their concerns about Huawei directly to a sympathetic “journalist”, including details of actual ASIS operations. In response, no one was raided or had their passport seized, no one was publicly smeared and threatened with prosecution.

This is little short of a bureaucratic coup by the most secretive, least accountable officials in the government. They have been delivered unrestricted power: they can operate with virtual impunity and they are given whatever laws and money they ask for, with no requirement to justify either and no genuine accountability when things go wrong. And they will remain in power long after Tony Abbott has vanished.

And almost without exception their competence can be described on a graph as ‘trending downwards’.

From a very low base.

Can anyone explain to me how it is that a ‘Liberal’ government is advocating basically blanket surveillance of their citizens. How is that ‘liberal’.

It seems to me that almost anything can be classified as terrorism these days – even alienated parties to cases in the Family Court.

Still that is cheaper than false flag operations as a means of justifying budgets and powers so I suppose we should be grateful.

And their lack of oversight is unlikely an oversight.

How long until they drop the pretense and start wearing black leather trench coats and black fedora’s?

All of which has an historical precedent. Carl Schmitt, the Nazi propagandist in the 1930s and 1940s formulated a policy of having the government drumming up scares. Those scares were then used to justify crackdowns on individual liberties. A variation on that theme has been playing ever since. Just don’t pretend we have a democracy any more when there is a complete lack of accountability, not only for the spooks, but for their political masters. Anyone remember Saddam’s weapons of mass destruction? That lie, vigorously promoted by Howard and Abbott among others, has so far cost more than a million lives. The Nuremberg and Tokyo trials are but a distant memory.