Channel Nine reached a last-minute settlement with Gina Rinehart's lawyers over a telemovie based on her life. So what was cut? 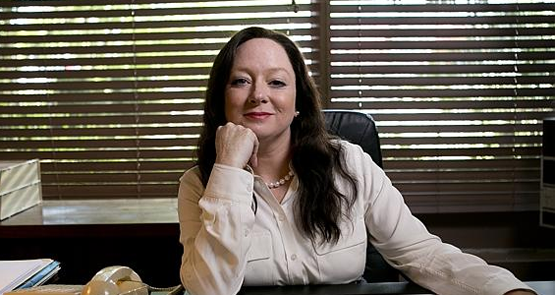 Mandy McElhinny as Gina Rinehart in House of Hancock

Gina Rinehart slowly walks through the Pilbara. She’s far heavier and older than she is currently. Around her, bombs explode in the red dirt landscape, as her father’s hope of achieving the cheapest, easiest way to mine is realised.

That was how Channel Nine’s House of Hancock, produced by Cordell Jigsaw Zapruder, was going to end — with an imagined future in which Rinehart triumphantly fulfils her father’s dream, even if it leaves her alone and unhappy. The scene was described to Crikey this morning as “probably the best in the bloody show” by somebody who has seen it. But that ending didn’t air, after the billionaire’s lawyers took action on Friday to force Channel Nine to let them see the final episode of the network’s two-part drama on Rinehart’s life. After being granted a preview, Rinehart’s legal camp and Channel Nine reached a confidential settlement to cut four minutes of the two-hour TV movie. A disclaimer was also added to the start, warning viewers that the program was a “drama, not a documentary”, where events were “fictionalised for dramatic purposes”. (Whether or not viewers needed the warning is unclear, as the program that aired last night featured at least two scenes of Rinehart talking with the ghost of her dead father.)

Another cut involved a depiction of the sexual harassment case filed in the 1990s against Rinehart by one of her former security guards. The case was settled out of court and widely reported on at the time. It was also included in Fairfax journalist Adele Ferguson’s book on Gina Rinehart. A source who saw the preview version of the movie (before the cuts) told Crikey this morning the story line was sensitively handled. In the original version, Rinehart came upon her daughter reading a women’s magazine featuring a story on the case on the front cover. While the confrontation is fictional, the magazine cover is not; the story graced the front of Woman’s Day in 1997, when guard Bob Thompson gave the magazine a long interview on his relationship with Rinehart. “I’m shocked that came out [of the movie],” a source said, given it was all based in true events. “They didn’t go into it much at all — they just had the magazine open.”

Rinehart has historically been particularly sensitive to reporting on her court battle with her children over the Hope Margaret Hancock Trust, which was intended to vest to them when they came of age. But there was very little on the court case in the film. Rinehart’s children are instead largely depicted in the terms she has described them. Rinehart’s solicitors appear mainly unhappy over the way Rinehart’s relationship with her father was depicted, citing “numerous falsehoods” in the portrayal of Rinehart’s relationship with her father, Lang Hancock.

The film that aired on Channel Nine yesterday ended with a flashback, with Rinehart thinking back on her youth and her wishes for what she wanted to achieve in life. This then segues into archival footage of Rinehart and Lang Hancock. Less dramatic perhaps, but difficult to argue with legally.

Asked to comment on the cut scenes this morning, House of Hancock producer and Cordell Jigsaw Zapruder co-founder Michael Cordell said he hadn’t been advised if Hancock Prospecting planned to sue (as has been reported in The Australian this morning), and could not detail what scenes were cut.

“We set out to better understand an iconic and important Australian story,” he said in an email. “It was made with a genuine sense of empathy for all the characters we depicted. It was inevitable there would be difficult and painful scenes, but we made this series with no sense of malice. No one takes on the Hancock story lightly, and we drew very heavily from the public record.

“Many comments from viewers last night indicate they now have a much more sympathetic understanding of all the characters, including Gina. She’s an extraordinary Australian who has achieved remarkable things. I think we all have a much deeper appreciation of her journey.”

Viewers who saw both the original uncut and final version of the telemovie made similar comments to Crikey this morning, saying they felt it was overall a highly sympathetic portrayal of the mining magnate. But it appears Rinehart’s camp disagrees. A spokesman told The Australian that as a show, “it denigrated the memory of [Rinehart’s] late father and attempted to portray highly personal events in a fictionalised and dramatised way while maintaining it is a ‘true’ story. The House of Hancock is replete with falsehoods, some knowing and deliberate, and is highly defamatory.”

The free publicity from the last-minute legal action meant the program did better than you’d expect for the second part of a TV movie. It had 1.38 million metropolitan viewers last night, and 1.945 million nationally — slightly above the 1.870 million national audience that watched part one last Sunday night. The metropolitan figure was slightly below last week’s 1.383 million.

The five trials of Gina Rinehart

Agree with you, bushby jane +++ what a travesty of decency that was!

One Law for all.