Poll Bludger: Labor takes the reins of a minority govt in Qld 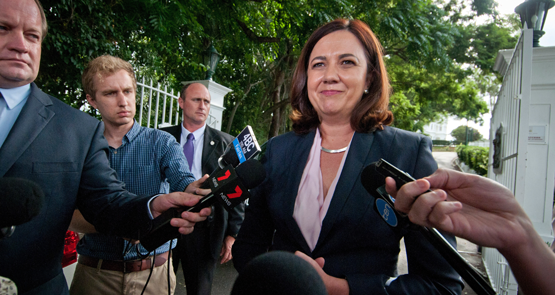 Two weeks after polling day, Queensland’s exquisitely unpredictable election finally reached its resolution on Saturday, with a result anticipated at the outset by only the most cockeyed of Labor optimists — the swearing in of Annastacia Palaszczuk as the state’s 39th premier.

That this would be the final outcome was clear enough a few days after the election, by which time it was apparent that only a highly unusual late reversal would prevent Labor from winning 44 of the parliament’s 89 seats, with decisive extra support assured from independent MP Peter Wellington.

However, you might not have had that impression from the Queensland news media, elements of which were far too heavily influenced by the feverish wishful thinking of the LNP.

The LNP’s argument was that it had been thrown a lifeline by the bankruptcy of one Mark Taverner, the Palmer United Party candidate for the close-run seat of Ferny Grove. In the short term, it was argued, this might lead the Governor to allow the LNP to remain in office pending a legal challenge to the Ferny Grove result based on Taverner’s ineligibility to stand, possibly resulting in a byelection. With the advantage of incumbency still in its favour, the LNP could then seize victory from the jaws of defeat through a hypothetical court ruling, a hypothetical reversal of fortunes at the polls, and a hypothetical deal with the two crossbench members from Katter’s Australian Party.

However, no objective authority ever lent voice to the notion that a Governor — particularly one of the acumen of Paul de Jersey, who spent 16 years as the state’s Chief Justice — might share the LNP’s unorthodox view that Parliament should be kept in suspension to avoid giving effect to a declared election result.

Readers of The Courier-Mail in particular were required to turn past exaggerated front page splashes concerning the looming state of chaos and head for the opinion section. There at least the paper had the good judgement to run columns by Anne Twomey and Graeme Orr, respectively leading authorities in constitutional and electoral law, who refuted the notion that any course was available to the Governor that did not involve allowing Parliament to resume with Labor’s full complement of 44 seats.

In the event, the LNP’s grand plan fell at the very first hurdle. When the result in Ferny Grove was declared on Thursday, it confirmed that Labor’s winning margin was greater than the number of ballots for Taverner that failed to indicate a further preference for an indisputably legitimate candidate. Consequently, the Electoral Commission of Queensland announced it would not proceed with its earlier plan to refer the result to the Court of Disputed Returns.

It remains open to the LNP to challenge the result itself but, given all the legal precedents, any court ruling in its favour would be highly perverse. Even then, the product the LNP would be offering Ferny Grove voters would be a minority government at the mercy of two Katter’s Australian Party MPs, who represent electorates as far removed as geography will allow from the concerns of suburban Brisbane. Labor would also be able to remind voters that the LNP had spent much of the recent election campaign warning of the “chaos” that would ensue if they abandoned the LNP for Labor and a patchwork of minor parties, which expressly included Katter’s Australian Party.

However, Labor too is finding its recent conduct falling short of its rhetoric before the election, when both parties observed the tiresome ritual of ruling out forming a minority government — with particular vehemence in Labor’s case, given its eagerness to negate the LNP’s line of attack.

Instead, Labor is in the eerily familiar position of coming to government with 44 seats and the support of Peter Wellington, which was exactly the situation when Peter Beattie came to power in 1998.

Far from plunging Queensland into chaos, that marked the beginning of 14 years of Labor rule, underpinned by landslide election victories under Beattie’s leadership in 2001, 2004 and 2006. Indeed, the period of minority government under Beattie proved to be brief, since a 45th seat was obtained at a byelection just six months later.

Flushed with victory and the goodwill attendant to a newly elected premier, Labor will now be hungrily eyeing winnable LNP seats whose members decide against sticking it out in opposition.

However, there is a less auspicious precedent closer to hand for Labor from Victoria, where the Baillieu-Napthine government’s one-seat majority after the 2010 election left it hostage to the wildly erratic mercies of Frankston MP Geoff Shaw.

Much then would seem to depend on the unity and cohesion of the Labor party room, the vast majority of which is entirely new to parliament.

Among those who aren’t is Cameron Dick, a senior Bligh government minister who spent a term in the wilderness after losing his seat in the rout of 2012 — and who has long been mooted as a likely challenger to Palaszczuk’s leadership upon his return to parliament.

Newman’s bovver boys have been neutered, in Queensland we can breathe clear air once more.

We’ll see. If she can be “nobodies girl” and resist the unions wanting to cash in their chips …then maybe…

Shame on you, William!
Palaszczuk has been Premier for 2 days, and already you are talking about a ‘leadership challenge’?
That must be some kind of record!!!!