The original mission of Crikey was to be something akin to Britain’s Private Eye magazine by fearlessly taking on the media, business and politicians with a cheeky and irreverent form of journalism.

However, we didn’t have a contributors’ budget or journalists on staff, so the opening edition ended up being quite an eclectic but interesting offering.

The National Archive first captured the crikey.com.au site on March 3, 2000 — 17 days after the launch — but you can see the original look here: 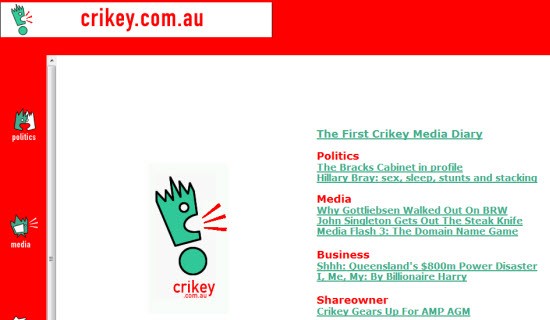 Publishing half a dozen long stories for free on a website each Sunday was not a business model that made sense, so within a year it had morphed into an email newsletter with up to 100 shorter stories published each week.

The internet doesn’t have the space constraints of newspapers or magazines, so we still published plenty of longer pieces online, but the email subscribers simply got an abbreviated introduction with a link.

It was an all-night affair putting together that opening edition, but it holds up pretty well after 10 years, and you should take the time to read some of the stories.

We don’t have a screen grab of the opening home page, but the six strong stories we debuted with can be tracked through the various section archives of that March 3 snapshot and were as follows:

Christian Kerr was our political gem, and the history of Christian’s journey to Crikey was explained in this piece when he departed to The Australian two years ago.

Pissing in the sink:

The headline was never explained in this personal profile of Col Allan, which ended up getting this big run in The New York Observer when he was sent from Sydney to edit The New York Post in 2001. Revenge is a dish best eaten cold, and it was great fun skewering this bully who had to explain his toiletry habits when asked about it by Helen Dalley for a Sunday profile.

Crikey goes inside a $32 billion law suit against our biggest bank:

It was inside all right, written by someone directly involved in the litigation. NAB’s shares tanked the following week, and we then got sprayed by Michael Pascoe on Business Sunday. John Maconochie never did get his big settlement, but he sure did make some waves.

The Crikey Register of Journalists:

Much of the pre-launch marketing to journalists came from sending mass emails researching the original seven Crikey lists tracking various things about journalists, such as political affiliations and selling out to the dark side. It was the first of many popular Crikey lists.

An old family friend Alan Hajek had taught Lachlan Murdoch philosophy at Princeton and told the entertaining story of not knowing who his famous student was and rejecting an invitation to spend Christmas with the Murdochs at Cavan near Canberra.

Journalism in the Top End: how one polly strangled me:

ABC TV journalist Jeremy Thompson produced an amusing personal account about the time then CLP Lands Minister Max Ortmann attempted to strangle him with a television cable. Only in Darwin! This was the only paid content in the first edition, costing $100 in cash.

An excellent anonymous insight supplied by someone close to the Killing Heidi duo who was disappointed with the corporate takeover of their careers.

The very first edition of <em>Crikey</em>

Crikey 15: Stephen Mayne on the future of the media

Congratulations on the anniversary. My appreciation of Crikey over the last 5 years is tempered by realising that I have enjoyed only a third of the journey.

What would Oz media be without Crikey? Dull.

Thanks for your innovation & sheer guts in launching such a venture, Stephen. I still have the signature whistleblower socks, kept for special occasions lest they wear out.

Been a Crikey reader since 2002 when the Alan Jones dummy spit video was emailed to me from a mate via Crikey.

The columnist I miss from those early days is Dan McNutt, who very accurately assessed what was going on with the Carr Government before people really started to realise what a terrible job they were doing.

Wow, is it really two years since Christian Kerr departed for the Australian? It seems like yesterday, give or take seven years.

(Surely this is not a reheating of a tenth anniversary article)