Abbott tries again on terrorism, even though it failed the first time

Having doubled down on aggression, Tony Abbott is also trying to use terrorism as part of his political recovery - even though it didn't help last year. 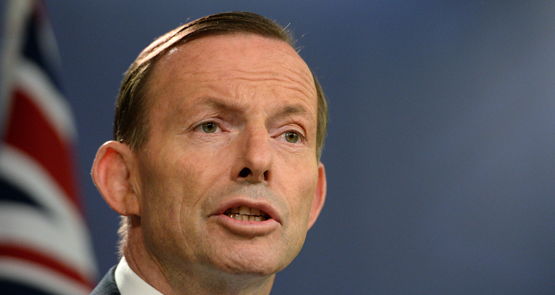 As Tony Abbott plunges ever deeper into a Nixonian abyss — minus, of course, even the faintest approximation of the record of actual achievement Tricky Dick racked up both domestically and internationally — the stakes become greater for the rest of us.

Having doubled down on his aggression, apparently in response to a clamour for more prime ministerial aggro that no one else has heard, Abbott is now looking to double down on national security, which forms, with his mooted families package, his intended recovery strategy. There’ll be a national security statement this time next week, after the release of the in-house review of the Sydney siege, he revealed yesterday. Almost certainly, there’ll be yet another package of national security laws unveiled, designed to address the disastrous “benefit of the doubt” that apparently has applied on border policy, citizenship and welfare benefits and in the state criminal justice systems. Perhaps even the laws of cricket will have to be changed.

Part of the Abbott national security strategy is, apparently, not just to strengthen national security, but to always be strengthening national security, to always have some legislation in the offing, or perhaps half-baked idea about banning something, that will help Abbott look ever more steely as he faces off against Islamic State, or lone wolves, or extremist Islamist groups. Just as the war on terror is designed to be permanent, so too the constant “tightening” of security laws aimed at basic rights.

For the moment, of course, there’s data retention, which Abbott has justified by invoking the Sydney siege and the Paris massacres, despite the fact that the perpetrators of both incidents were well-known to the relevant security agencies in both countries and data retention would have been wholly irrelevant (in fact, France already has surveillance laws that go far beyond data retention). Indeed, the perpetrator of the Copenhagen shooting on the weekend was also well-known to Danish security agencies and had only just been released from prison.

These aren’t mere coincidences. Despite the “lone wolf” terrorism narrative (and notice that only Muslims can be lone wolves, never white right-wing terrorists) Islamist terrorism in the West is regularly perpetrated by people already known to intelligence agencies, or about whom security agencies have been warned — it’s a pattern that stretches back to 9/11 (which, there is growing evidence to suggest, was funded by the Saudi royal family) and includes the Boston bombings. Prevention of terrorism has nothing to do with the need for yet-greater surveillance powers for agencies, and more to do with agencies doing their jobs effectively with powers they already have.

What’s peculiar about Abbott’s doubling down on national security, though, is the political thinking behind it. Just as no one believed what was missing from the government’s 2014 performance was aggression, no one has suggested the government had insufficiently failed to exploit national security. On the contrary: Abbott himself admitted on the weekend he was too focused on national security last year to properly tend to his backbench. The narrative is rather self-serving — poor Tony was too busy protecting Australia to look after his basic political self-interest — but it happens to complement the views of backbenchers, who leaked the contents of Brian Loughnane’s address to MPs last week to journalists. Loughnane claimed that recent terror attacks would focus the minds of voters — to the incredulity of MPs who know that voters are much more concerned about “bigger issues” — like the economy (currently struggling), health and education.

One of the reasons national security failed to deliver for Abbott last year in the way it delivered for John Howard was trust. Howard was only able to exploit national security once he had rebuilt voter trust in himself after the travails of 2000 and early 2001. Abbott is far less trusted by voters than Howard ever was, and has done nothing to restore that trust — if anything, he continues to damage it. Howard restored trust by, in effect, bribing voters to signal he was focused on “bigger issues”; then he was in a position to take advantage of the Tampa and 9/11. But Abbott is making a mad dash for the protection of national security without having done anything more than flag a rather desperate families package at some point in coming weeks. It’s as though he faintly remembers how Howard reacted in a similar, albeit less dire, crisis but can’t recall the specifics, or the order in which they happened, so he’s just re-enacting it as best he can.

So, after all the criticism of Peta Credlin and demands for her sacking, all the criticism of Joe Hockey and demands for his sacking, after all the complaints that Abbott was out of touch not just with voters but with his own backbench, the only change Abbott has made is to intensify two elements that weren’t working already. Oh, and to sack Philip Ruddock, who apparently was responsible for the whole mess from his position as Chief Whip.

[Abbott himself admitted on the weekend he was too focused on national security last year to properly tend to his backbench.]

“Abbott himself claimed on the weekend he was too focused on national security last year to properly tend to his backbench.”

Fixed that for you. In fact, everything he says from now on would be better associated with “claimed”, “alleged”, “implausibly stated”, etc.

With removal of the benefit of the doubt goes the presumption of innocence.

Toady’s not the fault – everyone else is.

There is a reason why there is a pattern to these so-called “terror attacks”. Not just in the way they are perpetrated, but how the patsies used in the attacks are conveniently killed very soon afterwards. One of the characteristics you didn’t mention is that there are nearly always “drills” going on before or during the events themselves. Those drills mirror the actual events. May I respectfully suggest you acquaint yourself with the original Gladio, and what is now described as Gladio “B”. It sheds enormous light on these oh so convenient “attacks”.