Here’s the thing that shits me most about Australian politics right now: we’re blaming the wrong thing for the government’s demise.

We are to blame. We did this; we got what we paid for. We elected this government. It doesn’t take a great genius to have predicted that this was going to happen when we put Abbott and his team in office. Who could possibly be surprised now? Could we really have such short memories?

After the recent leadership spill motion failed, ABC presenter Leigh Sales — clearly enjoying the impertinence of her role, and the PM’s chastened composure — asked Abbott to his face, “Who are you?”

I nearly choked on my dinner.

He’s not new, and he hasn’t changed much: he’s been part of the Canberra furniture for decades. We knew him as health minister in the long Howard government, under which I grew up. The guy who railed against the “morning-after pill” RU486, and called abortion “the easy way out“; the guy who verbally bashed an almost-dead asbestos sufferer; the strident monarchist; the party room fixer; the loyalist.

We knew him then again in opposition: the guy who called climate science “absolute crap“; the guy who took advantage of the gulf between the traditional free marketeers and the anti-science nutters to seize power in 2009. The guy who stood beneath “ditch the witch” signs, remember? The guy who’s “threatened” by gays, who thinks virginity is “the greatest gift you can give someone“. The guy with the three-word slogans.

We never liked him, of course, according to polling. His personal approval rating recently plumbed new depths of 29%. But we could never, even for a second, pretend we didn’t know who he was. To pretend now would be a lie.

He is without a doubt one of the most definable politicians of our time.

In our political imaginations, Abbott then, like now, occupied those borderlands between acceptable classical conservatism — embodied by Abbott’s mentor, John Howard — and the right-wing extremes Australians feel genuinely unsettled by, lest we turn into Americans — embodied these days by the likes of, say, Senator Cory Bernardi.

We knew Abbott in the Howard government, and then in opposition, as an activist. Australians are uncomfortable with activism of either kind, Right nor Left. But we elected Abbott, an activist, nonetheless, and delivered him to office in a landslide.

And this brings me to my main gripe. Political analysis in Australia credits two things with Abbott’s success in gaining office: chaos in the governing Labor Party, and Abbott’s own ruthless, disciplined campaign to stop the boats, and to axe the carbon tax.

And that sounds right, as far as it goes. Australians were justifiably pissed off the Labor Party didn’t deliver, instead consuming itself with antics. Rudd’s mandate was clear in Australians’ minds when we elected him: get rid of nasty industrial relations laws, restore fairness, and do something about climate change. When the government faltered, the public was upset, politicians panicked, and Labor prosecuted a disastrous recovery full of tragi-comedic errors. That much is true.

But what did we expect Tony Abbott’s team, built as it was on a freak-out over climate change, would deliver to our national politics as Labor’s replacement? The main narrative about the failings of Abbott’s government starts only after Abbott is in office: Abbott and his team delivered a badly executed austerity budget that will hit the poor the hardest. Then, the broken promises and tough cuts to education and health left us feeling short-changed. Then, there was the truly bizarre and anachronistic honoring of Britain’s Prince Philip, as a “knight” of Australia. And yes, we cringed at dishing out the award to a non-Australian who already possesses a long list of titles; the barbecue-stopper to stop all barbecues. Then a trigger: the spectacular but none-too-surprising defeat for Abbott’s party in recent state elections.

But, who among us didn’t know, deep in our bones, that this could be the case before we elected him?

I knew — and I assumed everyone else did — that Abbott’s three word mantras were dressing on a Trojan horse packed with policies to resuscitate old culture wars and austerity. In punishing Labor, we elected the guy we’ve known for decades, who we’ve always thought of as “a bit extreme”. Now we’re claiming, through our popular discontent with Abbott, that we didn’t know. I think that’s “absolute crap”.

Here’s the real story: Australians overwhelmingly elected Abbott, a well-known ideologue. Abbott ran a campaign to reform government, which he did, fast. We’re now pretending to be upset that he didn’t tell us enough. And this is why I can’t accept it’s all Abbott’s foibles that have led him here. He was just being himself: the guy with the radical agenda, who joined the University of Sydney’s Student Representative Council just to wreck the joint.

We’re just watching it play out.

So … bad luck, Australia. If there’s anything to take from this leadership crisis it’s this: don’t be stupid. All these politicians have deep histories, animosities, pet peeves, eccentricities and ambitions; they draw on all of it to formulate policy and compete against each other. That’s politics. They’ll do what it takes. Resist the idea that our politics is in chaos, or in a tailspin, and that our politicians are solely to blame.

Ultimately, we get to decide which bastards get to make a budget to shape our future.

Abbott made the wrong choices only because we did. We need to own it. 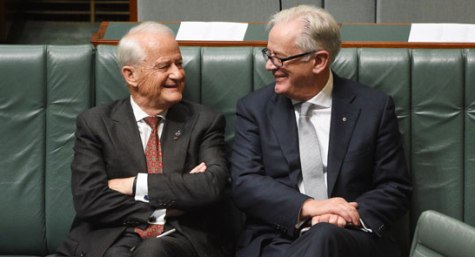 don’t feel alone. just under half the nation holds exactly these views and has done since pre-2013.

Don’t forget that Abbott is probably one of the laziest politicians we have ever had and he surrounds himself with people who are like-wise. As for for voting for him….speak for yourself. The LNP did.

To be fair, his election campaign was a policy blackhole. But I agree, we all know what this numpty was like – and ‘punishing’ a party because their inner house was in shambles but their policy set solid was retarded.

Agree to a point, however the influence of Newscorpse on those who gullibly believe the drivel, and shock jocks also played it’s part. I blame the worst Captains Pick of @rupertmurdoch

I was so angry at Rudd for his final ego trip which cleaned out labor’s front bench of talent just months before the election, that it was impossible to vote for him. In fact of course i voted green, but i’m sure there were many more who went the other way.

It really was the mother of all cork ups for Gillard to go to that final snap leadership challenge. We all lost so much with that stupid vote.