Driving round in circles in Canberra -- not because of roundabouts ... look deeply into Pyne's eyes ... they want us to do what with a condom? ...

Time to pave paradise? Yesterday’s tip about the car park situation at Parliament House got quite a reaction, and we have been reliably informed that the secretary of Department of Parliamentary Services spoke to the presiding officers about the situation yesterday. In an email to members of the press gallery, Sky’s David Speers (in his role as president of the press gallery committee), said “thanks to everyone who has sent through individual complaints to DPS. I encourage you to continue doing so.” In a very polite way, it means “keep annoying them until they change it” — which is what journalists do best. One reader thought the tip was a bit of a beat-up, because paid parking in the public car park shouldn’t affect staffers, who can park in the Senate and House of Reps car parks. The problem is that those areas are full by 9.30 each morning on a sitting day, leaving nowhere else to park for staffers who turn up later, after the school run or a breakfast meeting. We’ll keep you updated.

Healthy confusion. Yesterday we told you that private health insurance companies were waiting on the  Private Health Insurance Administration Council to let them know how much they could increase health premiums by — an announcement that usually comes by early February for a rise that starts on April 1. PHIAC said the decision was with the minister’s office, but Sussan Ley’s staff told us the announcement wasn’t overdue at all. It’s not very often that Ms Tips feels any sympathy for private companies in their bid to charge us more money for their services, but our source in the private health sector said if the Health Department waits until April 1 to inform private insurers of what price rises have been approved, they won’t have time to properly inform people before the prices go up. Of course, just because they can hike up the price from April 1 doesn’t mean they have to, but who wants to wait when you can put prices up?

Bishop Bali boycott threat. While Foreign Minister Julie Bishop spoke eloquently in Parliament yesterday seeking clemency for Andrew Chan and Myuran Sukumaran in Indonesia, her tone became more pointed this morning, warning that Australians might boycott Bali if the executions go ahead. “I think the Australian people will demonstrate their deep disapproval of this action, including by making decisions about where they wish to holiday,” Bishop told reporters after Indonesian prison authorities said they had permission to move the pair to the Central Java jail, where the executions are to take place. Bishop said Indonesia shouldn’t underestimate how Australians feel about the situation. Tweet #boycottbali if you agree.

Palmer ads in the wrong place. One loyal Crikey reader watched Julie Bishop’s speech asking for clemency for Sukumaran and Chan yesterday, but was surprised to find a sponsored video on the post from the Palmer United Party — marked clearly as such, we hope this was an algorithmic accident, not Palmer trying to make money off a tragedy. 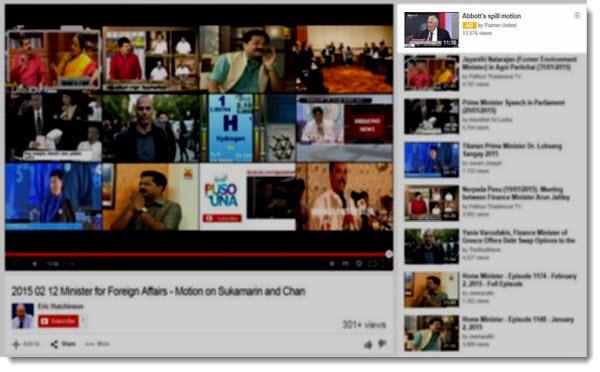 Heard it here first. Ms Tips had quite the giggle this morning when she got to page 5 and this “exclusive” in today’s Australian. Andrew Burrell reports that indigenous academic Marcia Langton is part of a group that has lodged a bid to take over the National Indigenous Times, but Tips readers would have read that in this column in January. 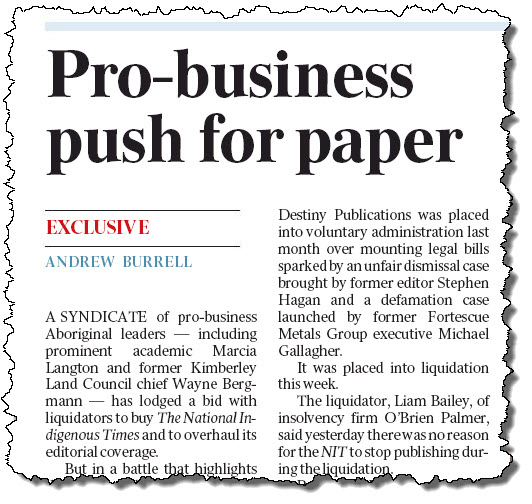 The eyes have it. In 2011 Christopher Pyne blasted then-prime minister Julia Gillard when she compared climate change denialists to Holocaust deniers — and the House seethed with disapproval yesterday when Abbott responded to a question about the government’s submarines contract with “there was a holocaust of jobs in Defence industries under members opposite”. The PM has since apologised, but we’re glad to see that Pyne hasn’t quite changed his tune on how he feels about the use of the word. In this Vine, Pyne’s eyes give him away –there’s a moment of “you did not just go there” followed by “better get back to nodding”. 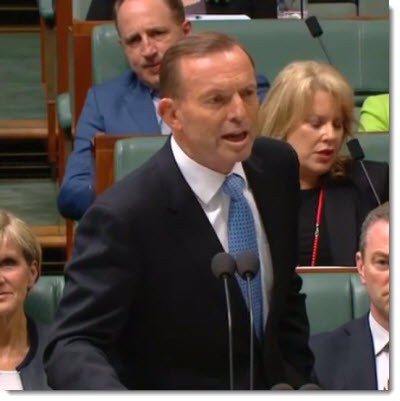 No shirt, no shoes, no service. Visitors to the Qantas Club and Qantas Business Lounge have been put on notice — from April 1 the airline will be enforcing  a minimum smart casual dress guideline in its major Australian lounges — so if you’re at Melbourne, Sydney, Brisbane, Canberra, Perth or Adelaide airports you can’t be travelling too comfortably. If you’re a FIFO worker you’re all right, as hi-vis clothing is exempt from the code, but thongs and singlets are out. Interestingly, the rules won’t apply at Darwin, Cairns and the Gold Coast airports — is it because if you ban people wearing thongs in those cities you’d have no one in your lounge?

True love. While Hallmark, Lindt and florists are hoping that we mark tomorrow by buying our special someone a romantic gift, health organisations across the country are promoting a different kind of amorous gift — tomorrow is National Condom Day, and local and state government health departments are pushing a different message. As part of the push, Sexual and Reproductive Health WA is running a competition to get people to take a selfie with a condom and upload it to social media to win a prize (they’ve said to keep it PG, whatever that means). While we know that young people are keen on selfies, we don’t have a lot of faith that the competition will get a lot of entries. Meanwhile Thailand’s government is encouraging couples to go to their local temple instead of having sex to try to reduce teen pregnancy rates. Governments and Valetine’s don’t seem to mix at all.

More importantly than Valentine’s Day, or National Condom Day, tomorrow marks the opening matches of the Cricket World Cup. Sportsbet used the opportunity to try and help our the English cricket team, which meets Australia in the opener in Melbourne tomorrow night. 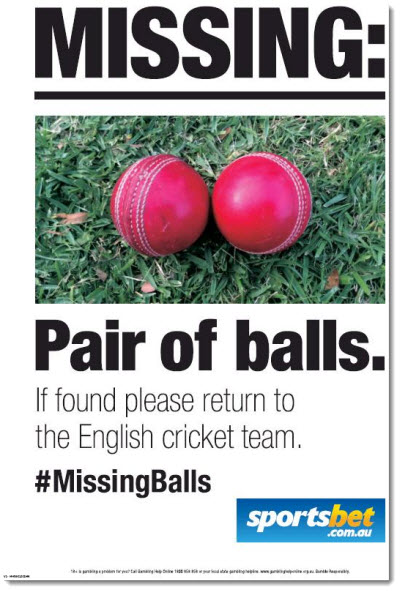 But we all know the real relevance of tomorrow’s date is it will mark Crikey‘s 15th birthday. We will be celebrating on Monday, if anyone wants to send us cake or presents …

Does anyone really think tourism to Bali will be affected? Be interesting to see the figures if the executions go ahead.

Just Bishop taking advantage as usual. they haven’t just suddenly started doing it after all.