Australian newspapers are losing more and more revenue from their declining print circulations. When will publishers say enough is enough and take steps to staunch the bleeding? Glenn Dyer and Myriam Robin report.

The details of the December quarter and 2014 circulation figures for Australian newspapers and magazines reveal some absolute disasters, particularly at Fairfax, and a looming headache at News. The circulation figures are comprehensive — they contain all sorts of detail on print, print plus digital, digital-only subscriptions and combined figures. There’s also a breakdown involving freebies, or copies of papers in hotels, on planes or in passenger lounges at airports. You can choose your data point and build a story that glosses over the bad news.

But over the past couple of years, the story, in aggregate, has always been bad. And the steady drip of falls will sooner or later force Fairfax, and possibly News Corp, to make a difficult decision — when they’ll make the first cut to the frequency of publications of their storied metropolitan and national editions.

According to the report from the Audited Media Association of Australia, total print sales for The Australian (which combine print-only sales with those of print bundled with digital) fell 6.7% to 104,700. The Weekend Australian‘s total print circulation was 227,400, down 6.1%. The Monday-to-Friday SMH fell 13% to 114,634, while the Saturday edition held up better — down 8% to 180,400. These papers also have solid digital-only subscriptions — the SMH has the largest, at more than 97,000, while the Saturday edition has over 61,600. The Oz had 59,800 digital-only subs, and the Weekend Oz had just over 49,000 digital subs. 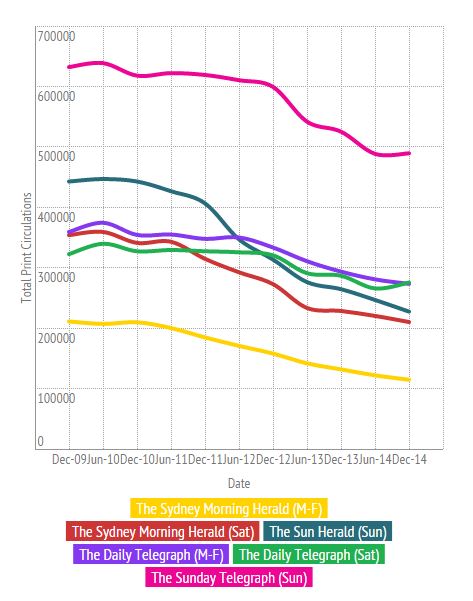 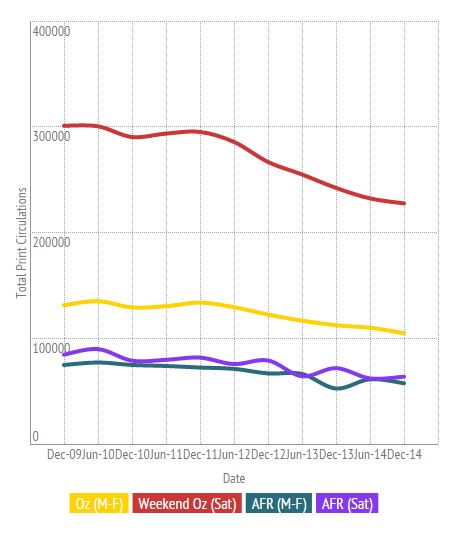 But what of The Australian Financial Review? Well, it doesn’t break down its print, print-plus-digital and digital-only subscriptions. There is just one figure, 57,457 for the AFR in December, and 63,621 copies for the weekend edition. The AFR‘s failure to provide a breakdown of its sales figures makes you wonder if its digital strategy is still a mess and suffering continuing reputational damage from the absurd price-gouging and over-pricing attempted by previous management of the paper. But it’s not alone in providing few details. Many News Corp dailies — The Daily Telegraph in Sydney, The Courier-Mail in Brisbane and The Advertiser in Adelaide also don’t provide breakdowns between their print only, digital and print-plus-digital bundles. They just provide one figure, which has slipped lower and lower (like everyone else’s).

How low do the daily newsstand print sales have to fall before they start forcing a rethink of daily printing? Many American papers had higher circulations when they made the choice to print less frequently. But Australia’s publishers, who felt the effects of the internet somewhat later, have held firm. Judging by the commitment of the managements to the papers, that day is not very close. But the question is, if the print sales continue to decline like they have done in the past three years, will there come a stage in the next three that will force managers to examine publishing frequencies, as has already happened overseas? Given the tens of millions of dollars in losses racked up by The Australian, you can’t see News cutting back on its publishing frequency. The more likely first-mover is Fairfax.

A move away from daily publication will undoubtedly be followed by further cuts to newsrooms. If the overseas experience is any guide, revenues from digital paywalls and advertising won’t replace the money made from selling print ads and print copies. The managements can “right-size” their newsrooms to meet falling print and rising digital sales, but at some stage, the number of print journalists (even if they work across all platforms) will have to be reduced. 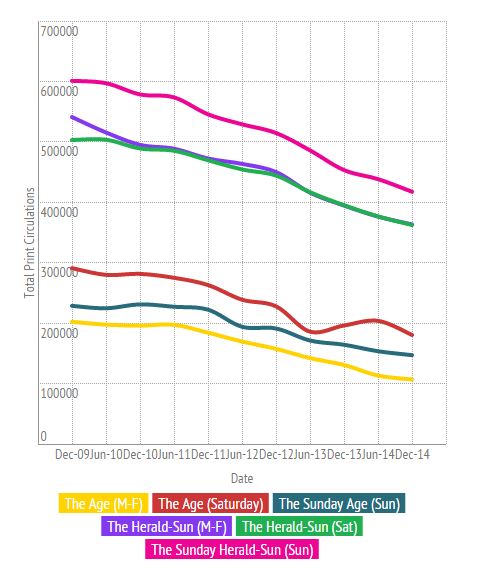 In Melbourne, there’s an added difficulty — it is now clear the city is becoming more and more a Murdoch town. The Herald Sun has a Monday-to-Friday average print-only sale of nearly 349,000. Add in the paper’s digital-only subs of nearly 35,000 and the print/digital packages totalled more than 14,400. The Herald Sun‘s circulation, while falling along with everyone else’s, is eclipsing The Age‘s. Even though The Age has impressive digital numbers (but like all digital subscriptions, we have no idea of their cost/profitability and that of the advertising) in its three editions, the declining print sales is pushing the paper into being a marginal voice.

I wonder what the true sales figures for the AFR would be were it not a tax deductible expense?

Fairfax, the Guardian, the ABC & of course Limited News are all State sponsored media.

For anyone with a rudimentary knowledge of foreign affairs, Fairfax’s continued pro NATO Putin bashing, is clear evidence of its demise as a reliable source, save for the excellent work of Paul McGeogh. Have a look at the neocon dross posing as journalism on page 32 of today’s SMH, where every breathless ‘revelation’ of Putin inspired evil, fails to mention the fact that the US MSM & its NATO country equivalents, have been doing exactly the same thing for the past 70 years……but of course the journo Nick Miller knows that to mention this fact is a one of the many ‘no-go’ areas for State sponsored media.

For the record, I find the editorial line followed by Russia Today TV to have more credibility than any of the US or Aussie MSM. Check out Abby Martin’s program which takes a no holds barred approach to news based on evidence, as opposed to the doctrinaire dross produced by the editorial stooges at Fairfax or the ABC.

@Kevin_T Herbert.
Very well said.
In the past we could at least use the newspapers to wrap fish and chips and meat. Unfortunately, that is no longer an option. The sooner the newspapers go down the drain the better.
Thomas Jefferson said in 1807 “Nothing can now be believed which is seen in a newspaper. Truth itself becomes suspicious by being put into that polluted vehicle. The real extent of this state of misinformation is known only to those who are in situations to confront facts within their knowledge with the lies of the day. ” Because of the internet and alternative media, this observation has become obvious to many more people.