Health funds waiting for certainty ... new Graham Perrett book on the way ... why is Vogue obsessed with llamas?

Health funds in the dark. We hear from an insider that private health funds are anxiously waiting for the government to release the approved annual increases to the cost of their policies — an announcement that will soon be overdue by the standards set in earlier years. In previous years the announcement of the rate of claims inflation has been announced early in February, which is when the Private Health Insurance Administration Council’s website says the outcome will be known. Last year the figures were actually released in December, so health funds were hoping for a quick outcome. This morning PHIAC told Crikey that the decision was at the Health Minister’s office, a claim backed up by insiders who are speculating it must be sitting on newish Health Minister Sussan Ley’s desk. So where’s the release? It’s not due yet, a spokesperson told us, saying that it wasn’t required until April 1. It was reported last month that the increase would be announced in February, but the spokesperson wouldn’t be drawn on when the announcement could be expected. Premiums are expected to be up 6-7% — is the government avoiding the announcement to stave off more negative headlines?

Please spare the Bali Nine. Today’s editorial highlights Foreign Minister Julie Bishop’s heartfelt speech on the government’s bid to seek clemency for Andrew Chan and Myuran Sukumaran, and in what was a rare moment of bipartisanship, her speech was followed by an equally sincere contribution from opposition foreign affairs spokesperson Tanya Plibersek, including these anecdotes:

“We need to have a principled and methodical approach to punishments of serious crime. I perhaps have a particular view on remorse and redemption because of experiences in my own life.

“I have another perspective on this, too. In 1997, I lost my brother to a violent crime in Port Moresby. I know that if I had been the one making the decision about the punishment of the person who did that crime, I couldn’t have thought of a punishment bad enough.

Baby, you can park my car. This from a regular at Parliament House, who tells us that the move to paid parking in the public car park is causing issues for staffers and MPs:

“You might want to head down to the public carpark at Parliament this afternoon as staff, staffers, lobbyists, taxis and all the rest attempted a mass exodus through the new paid parking system.  It appears a feature of the system is to only operate one of the two gates at a time! Last night there was a queue of about 25 cars, with disgruntled motorists honking incessantly while waiting for about 15 minutes to get their cars out.  DPS security tried to calm the situation, but basically could do nothing. When the AFP arrived the honking stopped. Given that tonight everyone will be leaving on the dot at 5 to get their planes etc, it will be interesting to see how well DPS’s latest project is going!”

We’ve been hearing grumbles about the parking situation from a few corners — perhaps everyone should try and hitch a ride with Clive Palmer, who turned up to Parliament today in a red Tesla.

New Perrett fiction on the way. Ms Tips hears that Federal Labor MP Graham Perrett has a new book on the way, a follow-up to his previous works of fiction The Big Fig and The Twelfth Fish. The book, to be called The Solid Rock, is due later this year. Perrett’s previous work made waves for its inclusion of some saucy sex scenes — we’re not sure if such salacious details will be included in the next work from the Queensland MP.

Pulling the wool over Vogue‘s eyes. Vogue has always been the bastion for haute couture (except for that time they put Kim Kardashian and Kanye West on the cover), but now it seems that even fashionistas have a sense of humour. In the past 24 hours the site has uploaded no fewer than 10 articles all about llamas — including “Llamas, pajamas, male models — what more do you need for Valentine’s Day?”. At first we thought it was a hack, but the llamas are too well-styled for that. 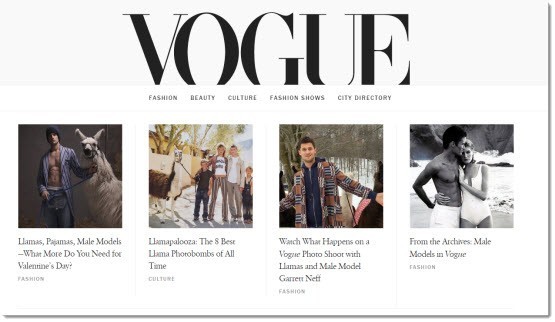 New mandarins at Immigration. The grumbles and leaks at the Immigration Department don’t stop:

“More eyebrows raised at immigration as [Immigration secretary] Mike Pezzullo announces his choices to fill vacant deputy secretary positions. Two of the promotees are trusted lieutenants from Customs and one from the AFP. The problem is that none of these appointees are likely to challenge Mike and his ideas, with the only advice going to Ministers now being the Mike view — nothing else, no dissent. Part of the announcement was that the last remaining long term immigration DepSec has been shunted aside on a special project, leaving no one with any immigration policy expertise in a senior position. For an already depressed immigration staff this is just further bad news. Not to mention risky for the Ministers and government.”

We asked the department about the staff changes and were told by a spokesperson for the Immigration and Border Protection Portfolio:

Our tipster was on the money, with Outram previously an assistant commissioner at the AFP and Noble and Briscoe coming from Customs.

House of leaks. Netflix gave fans of TV show House of Cards minor heart attacks this morning as season three of the political drama appeared on streaming service Netflix for 30 minutes — two weeks earlier than expected. While some fans are dismayed that the show is no longer available, the reaction from the show’s Twitter account was spot on:

Abbott in unusual company. Prime Minister Tony Abbott has been fending off questions from the media for weeks that are a variation on the theme “you’re doing a bad job, why is that?”, “how will you stop sucking at being Prime Minister?” and “why does everyone hate you?” but now an American think tank has published a piece in which he is compared to Argentina’s president, Cristina Fernandez de Kirchner, Ecuadorian President Rafael Correa, North Korean dictator Kim Jong-un, and Russian President Vladimir Putin. What grand company. Joshua Kurlantzick’s post says:

“In less than two years as prime minister, Abbott has proven shockingly incompetent, which is why other leaders within his ruling coalition, following a set of defeats in state elections, may now scheme to unseat him. They should: Abbott has proven so incapable of clear policy thinking, so unwilling to consult with even his own ministers and advisers, and so poor at communicating that he has to go.”

Pash for Pyne. GetUp and the National Union of Students are trying a new way to draw attention to their fight against the deregulation of higher education by inviting students to kiss a poster of Christopher Pyne. Yes, it doesn’t make much sense to us either (apparently they are supposed to be kissing deregulation goodbye). The Education Minister, always in good humour, has tweeted that he’s “already spoken for” — while we’re sure Mrs Pyne is flattered, we don’t think Australia’s students really are mounting a romantic challenge — just a policy one. 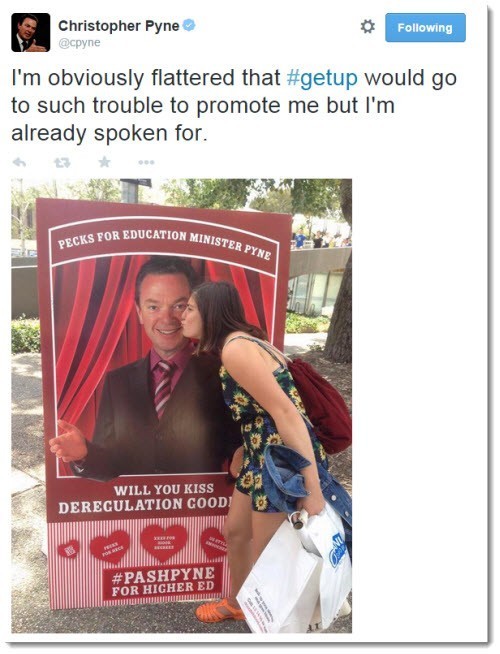 Who said that? Surely writing a press release isn’t that hard? Apparently it is for NSW Nationals MP Katrina Hodgkinson’s office — who sent this line out to media today.