Despite Bolt's bile, Abbott has only one person to blame for his government's ongoing strife -- himself. 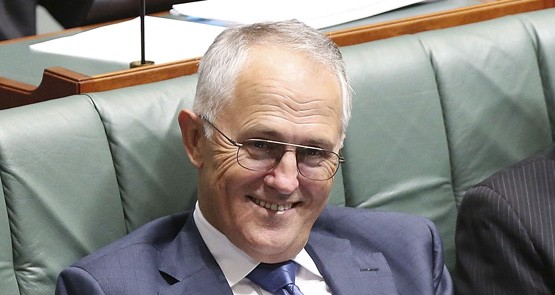 There is no usual excuse for reading or discussing the works of Andrew Bolt. A general exception must be made for lawyers forced to sift through his toilet of logical fallacy for libel and another for Australians so forgetful, they need Andrew to remind them whom to hate. Otherwise, this “writing” is best understood as infotainment that does not shift policy and social attitudes but merely reinforces them. Bolt gives his rusted-on readers the comfort of an unchallenging spite that already exists in the culture and even if we removed him and his dodgy graphs and car crash conclusions, there would still be an appetite for this sort of cheap and thrilling blame. It’s The Blacks. The Fake Blacks. The Lesbians. The Muslims. But, Bolt didn’t invent the convenient loathing of idiots. He simply cashes in on it.

It is true that Bolt, unlike his more adroit NSW counterpart Alan Jones, holds little influence on government. It is generally true that we who do not play blame politics should simply ignore this reeking eminence cheese and wait for it to rot. But, what has more lately become true is that it is not only a good idea for progressive readers to pretend Bolt doesn’t exist; a recent column has given conservatives cause to snub him as well.

As Glenn Dyer pointed out in Crikey last week, Bolt had been unusually silent, most particularly on the matter of Abbott’s recent leadership woes. Perhaps he was “regrouping” or having his blood renewed with infant albumin at a clinic in Switzerland because this week, he delivered an animated doozy.

In a News Corp piece widely discussed — mostly in other News Corp pieces — Bolt called for the immediate spanking of Malcolm Turnbull. It was Turnbull, he said, who was responsible for turmoil within the Liberal party; and if you’ve never read Bolt, this analysis is typical of the writer’s usual whimsy. To blame Turnbull for the current leader and government’s problems is a bit like blaming, say, insufficiently pigmented Aboriginal Australians for the deficit. They Are Taking Your Money and Turnbull Has Taken Your Trust.

Turnbull’s leadership ambitions might be a lot more real than Bolt’s assertion of “fake” Aboriginal Australians. But, the hopes of the member for Wentworth didn’t get the Abbott government into this shit. They have managed that very well on their own with a range of policies and a kind of messaging that look very much to the electorate as though they were devised on the advice of Milton Friedman’s Southern Baptist simple cousin. The Abbott government comes across largely like a bunch of moralising nitwits who have had their faculties for reason replaced with an illustrated New Testament and their compassion erased by a Quarterly Report. Turnbull, whose mild atheism plays well in a global era where religion is played so badly, is one of the few frontbenchers Australians could imagine inviting to Christmas dinner without the guarantee of a terrible fight.

Turnbull has helped and has not hindered what remains of his government’s popularity and, as is largely agreed, stands as one of the few leadership chances for re-election. Bolt can go on all he wants about Turnbull’s “lies” when speaking of his prime-ministerial drive, but, such private conceit aside, he represents the only hope for the immediate future of conservative politics in Australia. And what Bolt has come to represent is the past.

In his blog post, Bolt concedes that Turnbull’s economic policies are in line with his own, and this stands as the only moment of sound analysis in the piece. Turnbull is, like Bolt, a supply-side guy who believes the myth that the centralised accumulation of corporate wealth is good for private wealth. Turnbull believes, like Bolt alleges to, in small government. That Turnbull does all of this in a nice sports jacket while paying lip service to an un-costed dream of “tolerance” seems to be Bolt’s primary problem.

If Bolt truly believes in small government and the benign invisible hand, then the fact of Turnbull’s never-to-be-meaningfully-funded apparent progressivism shouldn’t matter one jot. In fact, he should be championing the pin-up who seduces a swinging middle class with his cultural liberalism. Bolt should not care that Turnbull appears to have more passion for a surplus than he does loathing for the minorities roasted on the cheap grill of News Corp every day.

Younger voters no longer blame Blacks, Muslims and Lesbians for their own or for social misfortune. What they largely blame instead is a lack of tolerance. And, while tolerance is a much nicer quality than racism or homophobia, it has the same ultimate economic function: if you show enough of it, people will believe it to be a rationale for your spending.

Tolerance, such as that our handsome Republican atheist practises, is the new ideological garb for the Right, and Bolt might want to consider trying it on for size if he cares to keep his column. Actually saying in public that you blame the socially and economically excluded for their own lot is no longer acceptable — you must appear, for this newer generation of voters, to care. That said, you are by no means obliged to transform this concern into policy.

As prime minister, Turnbull would almost certainly make some “tolerant” manoeuvres: he would allow a conscience vote on marriage equality and possibly hold a referendum on the Republic. But, he’d continue to manage the economy in a way that cheers Bolt.

It appears Bolt is wed more monogamously than some of us suspected to his own morality, though. What we might have supposed to be cynical ideology is actually crap he believes. And what he believes — aside from blaming Blacks, Muslims and Lesbians — is that government should manage not just our finances but also our morality. Bolt is in favour of big intrusive government and has all the makings of the “Cultural Marxists” he imagines live inside the ABC. I do hope he keeps giving this government such appalling, antique instruction and that they take it. He is a great help, in his naked loathing, to the death of conservatism. Let him never conceal it in the well-tailored clothes of tolerance.

Malcolm Turnbull isn’t an atheist. He’s a Catholic who thinks for himself. Disagreeing with Cardinal George Pell doesn’t make one an atheist. Sane perhaps, but not an atheist.

Gosh, Helen, you made me feel some compassion towards lawyers, for a moment! To think that some of the legal fraternity might be obliged or compelled to read Bolt’s bile (with apologies to bile of all colour). Poor bastards! Is it because rats refuse to do it?

I think the headline says it all, in fact I suspect Bolt would like to take Malcolm to the secret room at his house where he has pictures of every kid whoever bullied him at school on the wall and all manner of nipple clamps, whips ,paddles and assorted paraphernalia that help him quell the colossal inner rage he has that the world is so full of people who are not him.

Bloody Black Muslim Lesbians should go back where they came from. Then everything would be alright…just like 1954, before that horrible Rock and Roll “music” came along.

Mal is an economic rationalist – he’ll let anyone line is pockets and power regardless of race, religion and creed. Andy is an economic irrationist – he’ll only take his pay checks from the current powerful rich white men (and woman). Greed and meglomania unite them however.