On Monday, White Ribbon ambassador and psychiatrist Tanveer Ahmed wrote an op ed in The Australian arguing that male disempowerment was part of what led to domestic violence. Labor MP Tim Watts has called on Ahmed to either stand down or be removed. And other media tidbits of the day.

APN profits, but not from newspapers. APN News and Media spun and spun its 2014 full-year results this morning. It had higher earnings from growth assets and is going well overall, but had another weak year for its biggest business, newspapers in Australia and New Zealand. In fact, the weakness of the company’s Kiwi media businesses, especially the newspapers, was behind the surprise decision this morning to delay the long-mooted spin off of those assets for a year.

APN reported an underlying profit of $75.2 million, up 27%. The company’s earnings before interest, tax, depreciation and amortisation (EBITDA) — before exceptional items — was up 1% at $164.1 million, while statutory net profit after tax was $11.5 million, up sharply from the depressed $2.6 million in 2013. APN declined to pay a final dividend, as it did with an interim dividend six months ago.

But it’s essentially a newspaper business in Australia and NZ with outdoor, radio and online businesses that are doing very well. The great millstone remains the regional papers in Australia and the biggest newspaper chain in NZ. The NZ papers had revenues of $274 million, down 10% in NZ dollars and 3% in Aussie dollars. EBITDA of NZ$48 million fell 17% in NZ dollars and 9% in Australian currency. The Australian regional papers had revenues of $202 million, down 7% (its all Australian dollars), while EBITDA of $25 million was down 16%. NZ Radio had higher revenue and higher earnings, as did the Australian radio business, which recorded an 18% rise in revenue and a 14% rise in EBITDA. NZ radio recorded a 16% rise in EBITDA. The Australian outdoor ad business recorded a 16% rise in EBITDA as well. The big factor here was the acquisition of Clear Channel’s 50% stake in the radio operations in Australia and NZ a year ago this month. This year the impact of that business dissipates and its back to the daily grind that is the Australasian media business, especially in print. APN says it expects those weak results in newspapers to further moderate this year. — Glenn Dyer

More from the Bolter! Under a heading entitled “Let’s just print every single anti-Abbott rumour and demand he deny them“, Andrew Bolt thundered that “Fairfax can’t stop stirring”, protesting the rival company’s habit of publishing news, which he said was without foundation, that Turnbull had been offered Treasury.

Later, an update: “Turnbull this morning denied every detail/some of this claim. But there’s another day of destabilisation. Good job, Fairfax!”

Still later, a correction. “Turnbull did not deny being approached. What a great day for him: to be asked whether he’s the savior. Useful leak.”

Video of the day. On Monday, White Ribbon ambassador and psychiatrist Tanveer Ahmed wrote an op ed in The Australian arguing that male disempowerment was part of what led to domestic violence. Labor MP and fellow White Ribbon ambassador Tim Watts responded in Parliament yesterday, calling on Ahmed to either stand down or be removed so as not to tar the whole organisation with his regressive views. 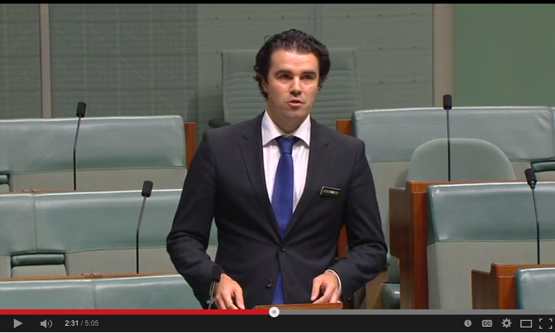 If the by-line was Tanveer Ahmed maybe he doesn’t think that and it was probably plagairised from elsewhere.
Why would White Ribbon allow this bloke to sully their purpose?
He confessed to serial plagairism and lost his column at the SMH.