Labor is poised to back a data retention regime, but protection for journalists and whistleblowers is under consideration. 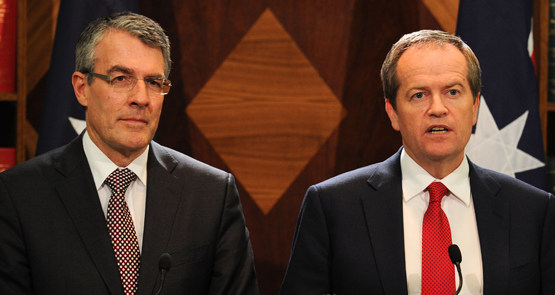 The government’s mass surveillance proposal, under which communications companies would be forced to keep records of the online and telephone activity of every Australian customer, looks set to go ahead, with Labor poised to back the scheme.

However, legislation establishing the government’s data retention regime may still face a difficult path through the Senate, with Labor understood to be considering following the lead of David Cameron’s Conservative government in the UK and amending the bill to protect journalists and whistleblowers, who face being hunted down as police forces, intelligence agencies and corporate litigants trawl through the vast trove of personal data that will be created.

Labor is expected to back the scheme, currently being assessed by the Joint Committee on Intelligence and Security, in order to avoid giving Tony Abbott any opportunity to revive his fortunes by branding Labor soft on terrorism. Shadow Attorney-General Mark Dreyfus, responding to three questions in Tuesday’s Caucus meeting about data retention, is understood to have flagged the difficulties of opposing it. Since then, the Prime Minister has used the arrests this week of two Sydney men suspected of planning a terrorist attack to insist data retention was necessary to stop terrorism, while Peter Dutton sought to link the planned attack to Labor’s asylum seeker policies.

However, figures on the Left of the party are said to be concerned about the threat of data retention to the media and whistleblowers. Major media organisations and the MEAA both flagged significant concerns that data retained under the proposed scheme would be used to hunt down whistleblowers who contact journalists. The data retained will also be available via civil litigation, meaning not merely security agencies but companies will be able to secure the metadata of journalists for up to two years (some JCIS members want to extend the period to five years), enabling them to track down whistleblowers via litigation.

Under current laws, a vast array of agencies from local councils up can demand the metadata of any person without independent oversight. Under the government’s proposed regime, retained data will be accessible by security and law enforcement agencies and any others the government decides to add. The Australian Federal Police have publicly acknowledged they use journalists’ and politicians’ metadata to pursue whistleblowers, and thin-skinned bureaucrats in the Departments of Defence and Customs have asked the AFP to go after sources for recent media stories.

The issue of unfettered access to journalists’ data to access sources has flared recently in the UK, where a recent investigation uncovered multiple instances of British police using powers to access data in order to track down whistleblowers and sources. A campaign, Save Our Sources, was developed in response to the revelations of misuse. Earlier this year, British Prime Minister David Cameron accepted the recommendation by the Interception of Communication Commissioner’s Office (ICCO) that any accessing of data to identify a journalists’ source would require a judicially issued warrant. Last week, British Deputy PM and Liberal Democrats leader urged the UK Home Office to urgently move on the issue.

The Australian government has repeatedly cited the UK as an example of the direction Australia should be going on data retention. Until recently, a code had been in place regulating British police access to data; after criticism of its weakness, it was recently redrafted. However, statutory protection will now be implemented instead. The British model establishes a tiered approach to journalist metadata, with access for ordinary investigative purposes determined at a junior level, access for investigations relating to journalists themselves determined at a senior police level, and access for investigation of journalists’ sources dependent on a judicially issued warrant.

In 2013, amid controversy over its war on whistleblowers, even the Obama administration moved to tighten the circumstances in which journalists’ metadata could be obtained, and give media organisations the opportunity to contest access.

Agencies like the AFP and ASIO oppose any establishment of independent oversight of metadata access, even for a limited class of individuals, because it would demonstrate that their claim that law enforcement would “grind to a halt” with a warrant requirement is false. Many European countries, including Denmark, Spain and Luxembourg, prohibit any police access to any telecommunications data without a judicial warrant and others like France have independent non-judicial mechanisms for approval.

In a humiliating appearance before the Senate Telecommunications Interception inquiry last week, the Attorney-General’s Department was unable to produce any evidence of a negative impact of a warrant requirement in other countries. AGD sought to reject criticism of the “chilling effect” of data retention on journalism in its JCIS submission by claiming existing laws protect whistleblowers — deliberately ignoring that current legislative protections wouldn’t stop police tracking them down, only apply to a limited class of whistleblowers and offer no protection to corporate whistleblowers.

However, the sort of amendment pushed by the Labor Left that established a protection for journalists (and, potentially, for other sensitive classes like doctors and lawyers), would address one of the key sources of potential criticism of the regime from the media. It would also be easy to draft, given journalists are already defined under existing Commonwealth shield laws.

The first threshold for such an amendment will be obtaining support for protections in the JCIS report. If it is unable to do so, Labor may seek to press the amendments in the Senate, challenging the government to defy the concerns of the nation’s media outlets and throw them out.

I fail to understand how not supporting data retention would revive Abbott’s fortunes, he’s beyond help.

It’s clear that politics are of primary concern to both major parties, the ALP now showing willing, for tactical reasons, to abandon the privacy of voters. A pox on the lot of ’em.

Can we have more detail about who counts as a journalist? For example, is Dave Donovan of Independent Australia legally a journalist?

The NSW definition appears to require employment:
“journalist” means a person engaged in the profession or occupation of journalism in connection with the publication of information in a news medium

The ACT definition is broader:
“journalist” means a person who is engaged and active in the publication of news

@zut alors, I would have thought Labor would want to give Abbott a leg-up at this point!

If ASIO can’t even protect the blue prints for their new headquarters, how can we expect them or ASIS or any of the other half dozen or so ‘security’ organisations (not counting the five eyes foreign ones) to protect all this info from foreign governments or, more likely, sophisticated cyber criminals? But rest assured when this info is stolen and subsequently covered up, at least any whistleblowers trying to inform the public will be ruthlessly hunted down. Time for a VPN I guess…

And remind me, what’s the difference between Labour and Liberal party again?

BERNARDK: The Liberal Party will brand the Labor Party as this as often and as frequently as they wish. Meanwhile millions of Australians will have their lives probed into on the basis we are potential terrorists.

Not good enough Bernard. Just because you are a journalist and presumably protected under this proposed law I’m not. And when I travel it tends to be in countries engaged in civil wars. My interests are in landscape/history & architecture so I don’t wish to be rounded up as a potential spy.