Tony Abbott jokes about Russian submarines, but his war on foreign investment is very real. 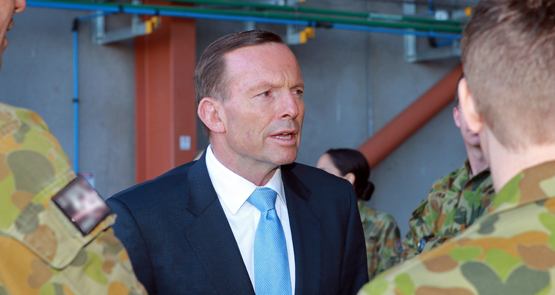 In the hands of any other prime minister of recent memory, it might have been a good throwaway line in Question Time — and heaven knows we can always do with more of them. Prime Minister Tony Abbott yesterday decided to mock Bill Shorten’s call for an open tender for the new RAN submarines — despite having, according to Liberal senator Sean Edwards, promised exactly that to Edwards in exchange for his vote in the leadership spill.

Do you know about an open tender? Anyone can compete. What the Leader of the Opposition wants is for anyone to be able to compete to provide Australia’s next generation of submarines. He might want the Russians to compete — the Putin class subs … Now he says you have got to have an open tender. We could have Kim Jong-il class submarines or Vladimir Putin submarines.”

A silly line, but not unamusing. A bit risky given that it was John Howard who so enthusiastically welcomed Putin to Australia in 2007 and announced he wanted to sell Russia uranium. Given that under the Howard government, foreign minister Alexander Downer went to Libya and humiliated himself waiting for Colonel Gaddafi to give him an audience so he could expand trade ties with that regime, and the National Party’s institutionalised wheat rort bribed Saddam Hussein’s officials. But points to the PMO staffer who came up with it.

However, Abbott couldn’t leave it alone. In response to a later question, he did it again. “We will not go to open tender, because only Labor wants to see Australian submarines possibly built in Russia or North Korea.”

Perhaps it wasn’t just a zinger — perhaps Abbott doesn’t actually understand procurement processes. Perhaps he believes an open tender is like a lottery — you randomly pick one from whoever lobs in a bid, rather than assessing them. Defence regularly goes to open tender for major procurements — so presumably they’ll now need to be shut down on the basis that the Prime Minister thinks open tender is a national security threat. In just November, Defence let a $700+ million computer contract via open tender — potentially leading to Chinese or Russian computers in Defence. Defence has just let a $66 million contract for satellites via open tender, obviously placing us at risk of having our defence communications go via a Russian bird.

Thank goodness Tony Abbott is now here to save us from the diabolical risk to our national security of competitive, transparent procurement processes.

Abbott, correctly, also had a lash at Bill Shorten’s disgraceful use of the subs issue to attack Japan in September, a low point in Shorten’s time in the top job, when he invoked World War 2 as a reason for not considering Japanese-built submarines. Protectionism and xenophobia in one elegant package.

But Abbott himself has just come from a very similar exercise. A couple of hours earlier, he had driven out to Murrumbateman, a small town just over the ACT border in NSW, to announce a new package of protectionism and red tape aimed at foreign investment. Among other measures, the threshold for reporting foreign investment in agricultural land and agri-business would be dramatically lowered from $252 million to $15 million. During the announcement, the government’s most senior economic illiterate, Barnaby Joyce, hovered like a smirking spectre of xenophobia in the background.

There’s an argument that putting in place more red tape on foreign investment salves the Nationals’ xenophobia, enabling them to pose as guardians against “selling off the farm” to their constituencies, while not actually prohibiting foreign investment. But the government’s consistent rhetoric is that any red tape — or tape of any other ideological hue you wish to invoke — is a deterrent to investment, which is why it made so much of its war on regulation, featuring the repealing of multiple Lighthouse Acts from the 1910s.

Perhaps Abbott can visit regional communities who would love to attract foreign investment into their local area and explain why they should miss out on the opportunities and jobs that would flow from the Chinese investment in the local dairy that may be deterred under his new rules.

Because that’s what these foreign investment rules are aimed at — Chinese investment. It’s strange, but no one was too fussed about European and American corporations buying Australian agricultural properties and business. The focus on foreign investment in agriculture only began emerging as an issue with the growth of the Chinese economy and the rise of offshore investment by Chinese banks, enterprises and investors.

Between Abbott’s war on competitive procurement and Chinese investment, it wasn’t a good day for sensible economic policy. Labor mightn’t be much better, but they have the luxury of not being responsible for anything at the moment.

Government gets it part-right on submarines

I thought that Tony Abbott was the Government’s most senior economic illiterate.

‘Labor mightn’t be much better, but they have the luxury of not being responsible for anything at the moment.’

BK, haven’t you been paying attention? Apparently everything is Labor’s fault.

Yet another example of Abbott’s total incompetence and his inability to accept the mantle of leadership. Proper procurement governance has absolutely nothing to do with political party alignment.

Slinging mud, pointing the finger, snickering quips and shifting accountability to the other side are all actions appropriate to the leader of an opposition. When is Abbott going to get it through his head though that leadership involves making decisions and laying out courses of action? “Good government” consists of more than continually blaming supposed “bad government” of the past.

Even more worrying is the thought that he genuinely doesn’t understand the mechanisms by which the government makes significant financial investments. I find that thought genuinely frightening. These clowns – these supposedly superior economic managers – don’t even understand what’s involved in tendering: the bread and butter of government procurement activity?

In a discussion at work the other day someone opined that Abbott may be suffering from a genuine mental impairment as a result of his involvement with amateur boxing in his younger days. I dismissed it at the time but the more I see of the man, the more I’m starting to wonder if there’s something in that possibility.

How about an open tender for Labor/Liberal leadership instead of union/corporate oligarch bestowed hand puppets? Might actually produce some leaders for Australians

And how does clamping down on foreign investment in land tie in with the free trade agreements that government members have been spruiking as one of the Abbott government’s main achievments?