Joe Hockey is struggling to keep his job and is clinging to a budget now abandoned even by his leader. 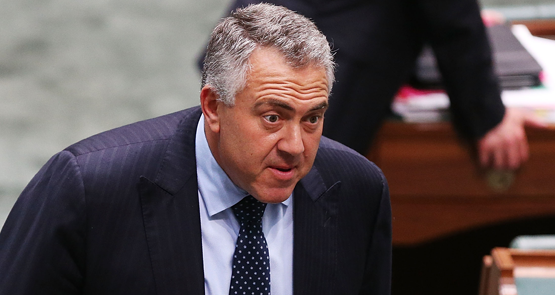 Treasurer Joe Hockey has launched a remarkable attack on his own Department and the Department of Finance, claiming that they bungled the crucial Pre-election Economic and Fiscal Outlook in 2013, in effect misleading voters ahead of the federal election.

Desperately trying to hang on to his job amid rampant speculation Malcolm Turnbull will replace him, Hockey has spent the last 24 hours engaging in major media interviews to explain he won’t quit and he faces a challenging environment as Treasurer. After a major radio interview this morning, Hockey complained to a scrum of gallery journalists, “if only the Labor Party had’ve been more upfront about the true state of the budget. You know, … in the Mid-Year Economics and–” before being asked by a journalist whether the 2013 PEFO was “wrong”.

Hockey himself produced the 2013-14 Mid-Year Economic and Fiscal Outlook; the previous major statement on the budget and the economy was the August 2013 PEFO, produced independently of any political interference, by Treasury and Finance. PEFO confirmed the deficit forecasts that treasurer Chris Bowen had released a fortnight earlier.

In late 2013, Hockey gave the Reserve Bank nearly $9 billion to increase its Reserve Fund, which had been reduced in value because of low interest rates and the strong Australian dollar had eroded the value of the bank’s US dollar holdings. Hockey blamed his predecessor Wayne Swan for not making the payment, but it was subsequently revealed that Treasury had not recommended that such a payment be made and the Reserve Bank had not requested it.

PEFO is particularly problematic for Hockey, given it was prepared independently of any political interference and represents senior officials’ best guess about future deficits. Hockey’s own deficit figures for 2013-14, this year and the next two years have more than doubled since PEFO, as this chart shows. 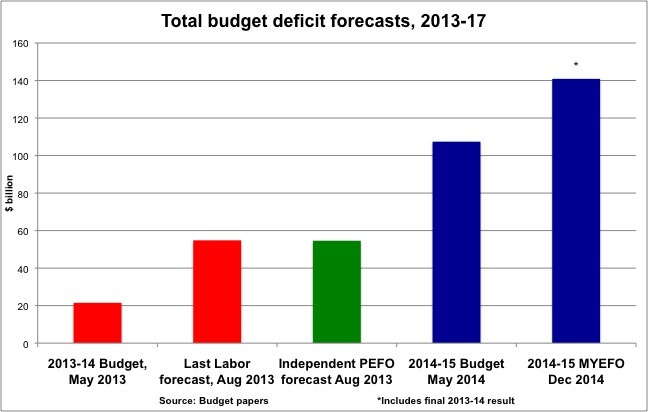 According to the 2014-15 Mid-Year Economic and Fiscal Outlook papers, this year Hockey will collect 22% of GDP in tax revenue, and that will go up to 22.4% next year and 22.8% in 2016-17. Between 2010-11 and the end of Labor’s time in office, tax revenue averaged 20.9%. Hockey, with all that low-tax, small-government DNA, is collecting tax at significantly higher levels than Labor, and his deficits have still ballooned.

Hockey was the target of a major leak overnight, with Fairfax reporting today that Abbott loyalists had discussed ousting him last year in favour of Malcolm Turnbull. Turnbull denied being approached by Abbott on the subject this morning, but didn’t discuss what others had said to him. There aren’t too many possible sources for such a claim, and it isn’t in Turnbull’s interests to have Hockey removed now — he’ll want the same great team that has almost delivered him the prime ministership to see the job through. Between that and the Prime Minister’s notable failure to endorse Hockey when invited to do so on Monday, the Treasurer’s grip on his job is starting to look shaky indeed.

And there is now a growing gap between the fiscal direction being flagged by the Prime Minister and that advocated by the Treasurer on the budget. Abbott, through a series of statements, has flagged a retreat from the 2014-15 budget, saying on Monday that it was “too bold and too ambitious. We did, with the wisdom of hindsight, bite off more than we could chew.” Further, Abbott said about the government’s future tactics, “we will not buy fights with the Senate that we can’t win, unless we are absolutely determined that they are the fights that we really, really do need to have”. Last week at his do-or-die National Press Club address, the Prime Minister said “because we have done much of the hard work already, we won’t need to protect the Commonwealth budget at the expense of the household budget”.

Hockey is having none of that. Yesterday, in addressing the joint party room, he insisted that the government had to stick to its 2014 budget measures — to abandon those would be to give up hope of returning to surplus, even as the government is consulting its way to abandoning the GP co-payment and Education Minister Christopher Pyne is going backwards on Senate support for his deregulation of higher education fees. Moreover, Hockey told his colleagues that the budget would not return to surplus even with stronger economic growth. Far from seeing the 2014 budget as a case of being too ambitious, Hockey in effect doubled down, saying that it was the only path to surplus.

He’s wrong, of course. In addition to the handout to the RBA, Hockey’s the one who handed back $12 billion in tax revenue to multinational power and mining companies and wealthy superannuants. He’s also committed to giving small and medium-sized businesses a tax cut this year. Treasury’s Tax Expenditures Statement in January showed the potential annual tax revenue gain from removing superannuation tax concessions was over $27 billion, illustrating the big potential revenue gains from even incremental adjustments to super tax concessions.

Hockey’s first step on the path back to surplus should be to stop cutting his own revenue to look after the Liberal Party’s mates. Instead, he’s sticking with the same measures that so alienated voters, the last 2014 budget diehard, who may well go to his political grave insisting a giant medical research fund, $100,000 university degrees and starving the young unemployed for six months was the only viable option to rescue Australia. Perhaps he thinks voters will suddenly undergo a Damascene conversion to the wisdom of his budget — in which case, points for optimism, but it’s not a sound political tactic. Rather than spending his time trying to breathe life into a budget that voters regarded as DOA in May, the government needs a treasurer who can re-engage with the electorate and start communicating a clear idea of what the government’s plans are.

Hockey is struggling to survive. And he appears to think last year’s budget will save him from drowning. Everyone else knows it will take him down.

The economy: cuts to the poor, no advance to surplus, weak outlook

> may well go to his political grave insisting

I struggle to understand how politicians can be so ignorant of reality. Are they born into a cultural thought bubble that they never leave?

[email protected]#1: The current Hard-Right-dominated LNP requires such fealty from their vassals. ’twas ever thus.

Good question Denis – you hear so many stories of the ones who come from struggling families etc etc and you wonder how they can forget what its like, or even worse, don’t care about the ones doing it tough now.
Its interesting to see that chart and how on target Labor were, despite, apparently, causing a ‘budget emergency’.
I despair.

BK, why is ther Labour party not saying this at each and every opportunity?
“In addition to the handout to the RBA, Hockey’s the one who handed back $12 billion in tax revenue to multinational power and mining companies and wealthy superannuants.”
I watched Q&A on Monday and Chris Bowen sat and took the usual lies of Labour party mismanagement from Alan Jones in particular, yet did not hit back with these facts (although superannuation funds did get a kick by Jones).

Hockey could save a fair swag of money, was it $1.5 billion or so, by just dropping all pretence to climate change and axing the ‘Direct Action’ initiative, which from memory was basically taxpayers giving money to the greatest carbon polluters.

It’s a phenomenal reality gap that he probably genuinely believes the yarsn he is spinning.