Uber channels Obamania for some hope and change of its own

The ride-sharing app has hired Obama strategist David Plouffe to convince people worldwide that sometimes it is OK to get in a car with strangers. 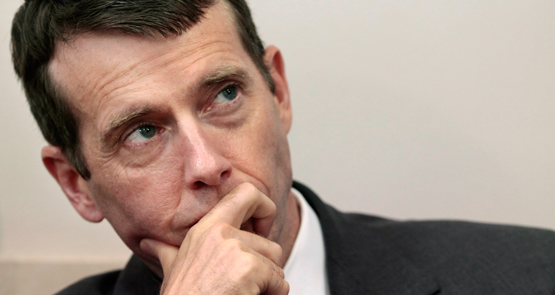 Poor David Plouffe. One of the principal architects of President Barack Obama’s winning 2008 campaign, now head of policy for ride-sharing service Uber, was being torn in two directions at a Sydney talk last night.

While the 300-strong audience had clearly turned up to the McKell Institute talk to hear Plouffe talk about Obama, the 47-year-old strategist really wanted to talk about Uber. Luckily, there were some common themes (David and Goliath, etc) so both topics got a hearing.

Finally, by question time (crowd-sourced by Twitter) he had caved, and told a good story about campaigning at the Iowa State Fair in 2008 and winning a large, stuffed toy dog. This, he decided, should be tied to the top of the campaign bus to remind the voters of Mitt Romney’s habit of putting the family pooch there on holidays.

It was a massive turnout at Sydney University to hear Plouffe, and it can’t all have been due to the free $50 Uber credit received with each invitation. The Great Hall was packed with university students, while up the front were former NSW premier Kristina Keneally and her husband, Ben, the mayor of Botany Bay, former federal MP Ross Cameron and numerous political advisory types.

Plouffe said that when he and his business partner, David Axelrod, started campaigning, Obama was given a less than 5% chance of winning against the Republicans. (Anyone wanting to know more about this should read John Heilemann and Mark Halperin’s superb book Race of a Lifetime: How Obama won the White House).

The low-cost Obama campaign basically harnessed “people power” to get people out to vote, donate small sums of money and talk to each other about the candidate.

“What is interesting to me is the power of people and grassroots activism in politics and business,” Plouffe said. “What the Obama campaign and Uber have in common is that a key driver of growth is the conversation between people in their living rooms,” he said, adding that Uber spends little money on marketing, relying on social media and word-of-mouth.

A large part of this is due to a “deficit of trust” in our institutions, particularly political ones, so people place far more trust in each other, he said. “In 2008, the most important conversation was with the neighbour.”

By 2012, the “giddy inspiration” of the first presidential campaign had been replaced by “steely determination,” he said. Plouffe observed that conventional news media and television advertising would play a far less important part in future political campaigns.

Personal human interaction was now the most powerful campaigning tool, and this could be achieved through social media.

He also said he thought Australia’s system of compulsory voting was “heaven”. Running campaigns here only meant convincing swinging voters, rather than first having to get people out to vote.

But back on Uber, Plouffe said that the ride-sharing service currently employed 2000 drivers in Australia and had the potential to employ 20,000.

Uber had the potential to alleviate one of the most pressing problems of this century, traffic congestion caused by urbanisation, he said. It makes sense — if more people leave their cars at home and use a car-sharing service, a bicycle or public transport, it will be good for everyone.

And here in NSW, we love Uber (and all of its competitors) because they’ve “disrupted” one of the state’s most anti-competitive industries, the hated taxi cartel, which guaranteed shocking service for sky-high prices. Blowing that up has created a great deal of goodwill for Uber, but it will now have to do something more than demonstrate it’s a more convenient taxi.

The next version of Uber, according to Plouffe, is UberPool, which is already operating in a few cities overseas. Basically a form of digital hitchhiking, it notifies you if someone near you is travelling a similar route, so you can share the ride and split the cost.

I’m not sure how Uber gets round the personal security issues — do I want to be sharing a car with a total stranger, and what if he wants to listen to 2GB? In the new Tinderesque world, it would probably turn into a kind of automotive dating service.

Anyway, it was a good talk, and everyone left feeling like they’d had an Uber Obama kind of night. Although I did read a critical tweet on the way home. It said we already have a long-standing ride-sharing service in Sydney; it’s called a “bus”.

I’ve asked it before – if a Taxi license is $250k, what’s Uber’s solution? Simply just get rid of it? What’s the forgone revenue on that? Should there be a cost recovery for oversight or concessions for regional areas/24hr/disabled/larger capacity vehicles “USO”?

No mention of dirt files compiled on sceptical journalists and other Uber scum tactics probably learned and honed in U.S. politics?

How does ‘it make sense’ that Uber will alleviate traffic congestion ? This furphy gets continually trotted out.

At best it’s a substitute for a parked car; and may in time contribute to fewer cars being purchased. However it’s more likely it encourages people out of public transport and into a car (like giving taxis priority in traffic does) and will therefore increase traffic congestion.

Enabling people who can’t afford to own car to have greater access to private transport is almost certainly a social good – but let’s not pretend for a second that it will alleviate congestion when the opposite is the outcome.

Spruiking for Uber again, Crikey? Again, no mention of the total illegality of Uber in every Australian State.

Why don’t you just start spruiking for heroin dealers too? Well why not? They are totally illegal too, but many people really really want them.

If Uber had 20,000 drivers what sort of income do you think an Uber driver would earn? Far less than the pittance taxi drivers do now.

And when Uber doesn’t deliver, the taxi services pick up the unprofitable slack, despite having their profitable (ha ha ha) work stolen from them by Uber.

When your Iphone goes flat after a whole morning’s use for example, and you can’t call Uber, you can hail a taxi. Neat huh? Raise arm, no batteries needed (unless you’re Arnie). Too bad Uber will have KILLED taxis in the future and you will not have that option.

Do you not recognise, Myriam, the essential parasitism of the Uber business model? Do you not understand that if, and when, Uber has to comply with all the regulatory burdens with which the taxi industry has to comply their low-cost advantage vanishes and you will be left with, well, a taxi industry?

Crikey, you are spruiking for the destruction of jobs and for an ultra-individualised Right-Wing future for workers. Odd, as I rather thought Crikey was a bit Left of Centre.

Oh, and I hope you all enjoy the future when your mobile phone with the Uber app becomes number one target for villains to steal. Look forward to them using your Uber account to book up thousands of dollars in rides whilst Uber is impossible to contact….

There’s an old saying: “Don’t wish too hard, you might get it.” In the near future you might just regret the death of the regulated taxi industry.

Bit of fearmongering from Graham here (stolen phones for free Uber rides? Wait until Graham hears about phone BANKING). But it is true that Uber has been accused of some pretty serious corporate malfeasance, and odd that this didn’t even warrant a mention in the article.