Take me to the April Sun … When he isn’t co-signing motions calling for a leadership spill, Liberal backbencher Don Randall has other important projects on the go. On Monday Randall emailed all federal MPs to invite them to be part of an Australia-Cuba Parliamentary Group to mark the appointment of a new Cuban ambassador to Australia. According to an email from Randall, seen by Crikey, the group has the blessing of the Foreign Minister, following the “normalising relationship between Cuba and the United States”. The first meeting was supposed to be this morning, but was cancelled yesterday by Randall, who assured his colleagues that he hadn’t lost interest, but he was waiting until the new ambassador could join the meeting next month. We’re hoping that someone is also bringing cigars — that would guarantee Joe Hockey and Mathias Cormann would be in attendance.

Big names left out. Almost half of Australia’s federal politicians have signed a letter to the Indonesian ambassador in Australia, asking that Bali Nine ringleaders Andrew Chan and Myuran Sukumaran be spared the death penalty, or even deported to Australia:

“We humbly request that due consideration be given to this letter so that the circumstances of Mr Chan and Mr Sukumaran can be reconsidered in light of their rehabilitation, their suffering and their families’ suffering, and upon the reasoning of the Indonesian Constitutional Court, we request that their death sentences be commuted to an appropriate term of imprisonment or that they be deported back to Australia on condition they face the criminal justice system here.”

The letter, signed by 110 politicians from across the political spectrum, was led by Philip Ruddock, Chris Hayes, Craig Laundy, Melissa Parke, Brett Mason and Warren Snowdon. It wasn’t co-signed by the leaders or deputy leaders of the government or opposition, though. While we know the government is working hard to save the men from the firing squad, we’ll be watching to see what the next move from Foreign Minister Julie Bishop is.

Geography is no border. Today Australians woke up to the news that Australia (yes, as well as Austria) would be competing in the grand final of this year’s Eurovision song contest as a wildcard entry. This also comes at a very important time for students at the University of Melbourne, who have the opportunity to study a Eurovision subject, where they will “acquire an in-depth knowledge of the history and development of Europe through the prism of the Eurovision Song contest”. While we at Crikey are extremely excited for this new avenue in which to express our patriotism, we do think the attention has been slightly mis-focused. While everyone else is wondering who will represent us on stage (AC/DC? Jessica Mauboy, whom Eurovision audiences would already know from her appearance last year? Kylie? All of them at once?), we’re focusing on which celebrity will appear to tell the audience how Australia has voted. This job usually goes to a mid-level “personality” from the country voting — the more camp, the better. Given that it’s a performance competition, we think Bert Newton could be up to the job. Others have suggested Dame Edna. But, given it’s SBS, one shouldn’t rule out the possibility of inimitable newsreader Lee Lin Chin. Incidentally, Eurovision’s organisers have made clear that the only way Australia can become a regular occurrence in the contest is if it wins this year. So if you’ve got any European relatives, now might be the time to lobby them on Australia’s behalf. Consider it a patriotic duty.

Smiting the non-believers. We hear one News Corp columnist  keeps a Tweetdeck column searching her own name and blocks anyone who commits the sin of tweeting criticism of her work. Our tipster found themselves blocked by the columnist, despite never interacting with her on the social media site. Seems some can dish it out, but they can’t take it.

Borders protected but immigration ignored. Since our tips last year and The Mandarin‘s investigation into disquiet at the Department of Immigration, we’ve heard from a tipster within the department that the new focus on protecting the border has been coming at the expense of other migration programs since the Abbott government came to power. One of the first moves of the new government was to move the Settlement and Multicultural Affairs Department to the Department of Social Services, a worrying move, according to one insider:

“SMA and immigration are inextricably linked. SMA humanises immigration by bringing the Department in touch with those who have recently settled and with understanding who they are and their immigration and settlement issues Also many ethnic communities stay in touch with the SMA part  of the Department because of their interest in immigration for friends and relatives. This gives the Department and the Government good links with communities, for example to understand how they respond to various government policies, and  for when things go wrong, eg in the Islamic community,  or when disputes blow up between different groups. It is also important because it enables policies and programs to be developed to nip emerging settlement problems in the bud, for example for marginalised youth.”

A recurring theme in our correspondence with insiders is the fear of another “Cornelia Rau incident”, as well as public servants also fearing for their jobs. While our sources are warning about the loss of institutional memory, it seems that institutional fear is here to stay.

Give a dog a bone. We don’t just have our eye on elections in Australia. If it wasn’t already obvious the election campaign has started in the UK, colourful MP George Galloway, Respect Party MP for Bradford West, offering rewards for constituents’ individual lost dogs: 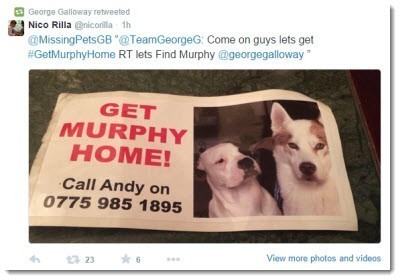 Hanson-Young hoax still around. We received this tip yesterday:

“There’s an email circulating showing a statement allegedly from Sen Hanson-Young who (in the statement) claims that with respect to the Lindt Cafe seige the ‘ultimate victim here was Man Horan Monis, a refugee fleeing persecution in Iran … The mental health system failed him … It was inevitable that a peace-loving Muslim, let down by a cruel government would turn violent …’ Surely it’s a fake … isn’t it?”

Yes tipster, it is definitely a fake — and one that has been around for almost two months. The fake Facebook post was reported to the AFP by Senator Hanson-Young’s office in December, and at the time she said, “for someone to take this tragedy and turn it into something so sinister and so politically motivated is extremely disappointing”. We contacted Hanson-Young’s office yesterday to check in on the progress of the investigation, and were told there’s nothing to report at this stage.

To be a fly on the wall. Tony Abbott is a satirist’s dream, and these guys have done an eerily good job with the first episode of web-series At Home with Tone: 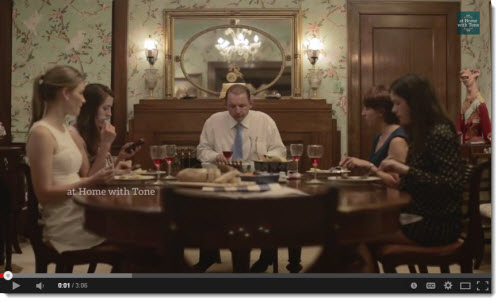 Oh dear. Would Randall even know where Cuba is? A fact-finding tour in the wind maybe ….

Then there’s Andrew Nikolic [the non-born-there Tasmaniac] who blocks you on Twitter if you ask whether they deleted an offensive tweet: https://twitter.com/HerrCoryBernard/status/544318520041803776

Interesting to note how so many M.Ps are happy to have drug criminals sent back to Australia as a sign that it’s safer to bring deadly drugs here than you might have thought.

Wine & texting at Tone’s table? I don’t think so.