Summer of ’69: lessons from a Liberal spill

John Gorton saw off the first Liberal party room spill, but he was ousted next time around, and Gough Whitlam was happy to pick up the pieces. But does Labor have a Whitlam in the wings? 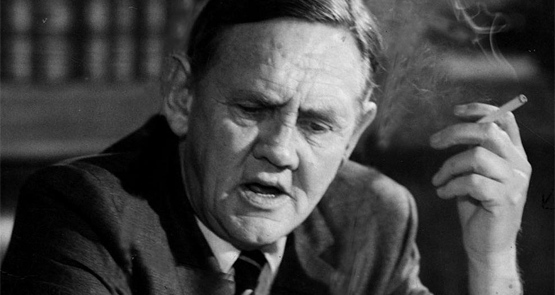 Those breathlessly watching the Liberal spill motion on Monday would do well to cast their minds back to 1969, when the federal parliamentary Liberal Party met in Canberra on November 7 to discuss a leadership spill against prime minister John Gorton.

The meeting was set for 10am but delayed for an hour because stragglers arrived late.

David Fairbairn, MP for Farrer in rural NSW, provoked the spill on November 3 by announcing in Melbourne he would contest the leadership against Gorton.

“The die is cast,” said Fairbairn, the minister for national development. “For me, it’s Sydney or the bush on, in other words, Kirribilli House or Woomargama [a small town near his Riverina farm].”

Saying that his loss of confidence in the prime minister had been “building up for some months”, Fairbairn made clear he objected to Gorton’s autocratic and ill-disciplined style of government.

“One man must work as a part of a cabinet,” he said. “Basically it is a prime minister’s policy which sets the pattern. Certainly this is the case where you have a prime minister who believes that he should keep a very strong control rather than have a team effort.”

In the tense days leading up to the spill, a third candidate emerged: treasurer Billy McMahon, the federal MP for Lowe, announced he would stand, dividing the anti-Gorton forces.

Gorton’s Coalition government had suffered dramatic losses in the federal election held on October 25, 1969, and this contributed to the backbench unease over his leadership. Gough Whitlam’s Labor opposition polled more overall votes than the Coalition and increased its number of seats by 18, while the Coalition lost 16.

Gorton promised to raise his game: “There is some dissatisfaction shown by the vote. It is necessary for that to be identified and rectified.”

Some 65 Liberal lower house MPs and senators arrived in Canberra for the spill meeting, with the Gorton camp claiming in advance that Gorton had the numbers to triumph over Fairbairn and McMahon. Gorton stood aside as chairman of the meeting and house speaker Sir William Aston took his place. Three scrutineers were appointed and ballot papers distributed.

The vote took 16 minutes to count, and there were loud cheers when Aston read out the result: Gorton had been elected with an absolute majority.

The precise result was never made public; all the voting papers were destroyed straight after the count.

Gorton supporters claimed he won by 40 votes to 25, but Daily Telegraph political correspondent Alan Reid said it was 34-31.

In a post-vote pep talk, Gorton thanked MPs for their support and urged the parliamentary party to work together as a team.

Gorton was asked whether there was any resentment in the party against his victory. “I have not seen it. I think everybody has the right to stand for leadership of the party. That right has been exercised and the party has made its judgment.”

McMahon interrupted the press conference, saying: “Of course, it is always my wish to remain treasurer. But I don’t want to be trying to commit the prime minister. It is his jurisdiction as to what he does there.”

The late Jim Killen, a former Liberal cabinet minister, wrote in the memoirs:

“Whether John Gorton should have sought a reconciliation with McMahon is a question that can be asked. I doubt if a reconciliation was possible. Gorton, with his well-developed singlemindedness, was not given to reconciliation. McMahon was determined to await another opportunity, and that is precisely what he did.”

Another post-spill casualty was the anti-Gorton air minister, Dudley Erwin. Asked who was to blame for his sacking, the MP for Ballarat said: “It’s shapely, it wiggles and its name is Ainsley Gotto.” (Gotto, a forerunner of Peta Credlin, was Gorton’s private secretary whose advice he relied upon heavily.)

The threats to Gorton’s leadership did not diminish, they intensified.

In March, 1971, he faced a second party room challenge. A motion of confidence was put to MPs and senators and the result was a tied vote at 33-all. Technically it meant that the vote was lost and Gorton could have remained in office.

However, he cast a vote against himself, saying: “Well, that is not a vote of confidence, so the party will have to elect a new leader.”

McMahon was elected and became Australia’s 20th prime minister. At the next election in December, 1972, the tired, dishevelled and out-of-touch McMahon administration was ousted. Gough Whitlam, who had travelled the country for more than three years promoting his policy program, was elected under the banner “It’s Time”. What’s Bill Shorten offering?

Little wonder Gorton isn’t remembered fondly by the party – he had some integrity?

Nice one Alex probably the most irrelevant piece I have read on this site. Different time different circumstances different Universe. Stick with the hear and now might be better.

“Does Labor have a Whitlam in the wings?”, obviously not since last October.
Not one of them comes near.

An amusing note about Gorton voting himself out.

He had already voted in the initial tied tally. So voting himself out was actually his second vote and presumably invalid.

You misspelled irreverent, Malcolm…
I guess LNP supporters aren’t really keen on analogies that end up with the sitting Liberal PM getting ousted. Its ok to point at Labor and claim to be ‘not like them’ but the sorry truth is, they are.