The submarines debacle is another example of how the PMO fails to do the basics that should be second nature to a well-run political machine. 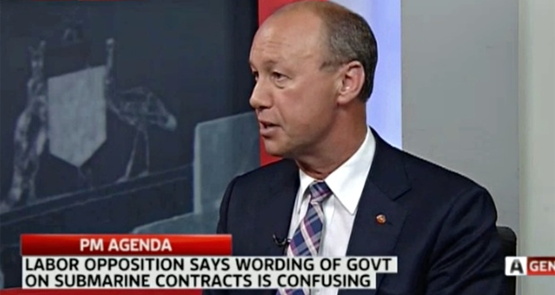 In yesterday’s suggestions for what Tony Abbott could do to improve both his political and policy performance, I suggest he needed someone in his office who can do the basics right — anticipate scenarios, have the right speech ready to go, ensure the Prime Minister isn’t left looking a dill, etc.

The unfolding, and highly amusing, debacle over the “competitive evaluation process” for the new generation of Royal Australian Navy submarines — producing more puns and war movie references than you can poke a torpedo at — is an exquisite illustration of this problem.

Let’s put aside the implications of making decisions on the fly about a $20 billion procurement based on the need to save the PM’s job and focus on the process for doing it. Once the Prime Minister had spoken with South Australian Senator Sean Edwards, that conversation needed to be the basis of an agreed set of words that would form the basis of the government’s comments from that point. If, as seems likely, Abbott misspoke and used words like “open tender”, they should have been stuck with — the actual implementation of an “open tender” could have been finessed later (call for expressions of interest, say, and knock those you don’t want out, then proceed to a select tender). Or, if Edwards got the wrong end of the stick, require him to state clearly what the process would be if it wasn’t to be a tender.

Instead, someone came up with “competitive evaluation process”, which, to the extent that it might make sense in procurement, must refer to existing products that can be assessed, not a future product that must be designed to meet our specific needs. Worse, whoever devised the term didn’t provide a clear explanation of what it meant, as if just throwing out a fudge phrase were enough. Kevin Andrews was dispatched to Adelaide to announce the, erm, phrase, and was caught out within seconds by journalists asking what it actually meant. Joe Hockey had several additional hours to get his explanation straight, but wasn’t able to offer one on 7.30. The Prime Minister wasn’t able to offer one in question time, either.

The idea of Malcolm Tucker-style top-down media management has become unfashionable in politics. In Australia, it’s associated with John McTernan’s time working with Julia Gillard. But a lot of it is less dark arts and intimidation and more simple things like making sure that whoever is speaking on a particular issue knows the broad story the government wants to get across, and that it doesn’t contradict or interfere with other important things the government is doing. But one, two, three, four, yesterday, government figures from the PM down to Edwards — who offered the immortal line “we cannot subrogate [sic] the need of Australians to be the best-protected nation in the country” to David Speers — couldn’t explain what story the government wanted to get across. Andrews’ office was so confused it issued a press release in three different fonts, a sure sign many hands had been at work in trying, and failing, to explain what the process would be.

The Howard government used to do this stuff well. The PMO would contact the relevant minister’s office, which would then get factual material from the bureaucrats and then feed it back to the PMO, where it would be packaged and shared with whoever needed it, especially backbenchers. But it’s not happening at the moment.

When is the government going to state the context for the new subs?

Not only is the credibility of quoted prices an issue, but there are also issues about sub maintenance in wartime and more generally about how self-sufficient Australia might need to be if there is another widespread war in the Pacific.

Further, the sub project, if done in Australia, sets higher standards in a range of Australian support industries, provides sophisticated jobs and training for the next generation of workers, and keeps quite a lot of them off the dole.

And all we hear about is the bait and switch price.

Where is the vision for Australian industry and society in 2050?

Where is Suzanne Blake these days, I wold love to hear what the ladies down at the RSL have to say about this shambolic govt!

You have to love Karma!

Torpedo’s los! RMS Team Australia is floundering and about to sink; man the lifeboats!

Denis V, valid comments all. It’s like the F-35’s, they require special fuel which, as Australia is losing it oil refining capacity, will all come from ???? Let’s hope there is never a war with someone who has submarines.

The first of the Japanese subs (boosting the Japanese economy) – will that be the “HMAS FTA”*?
(*”For(?)” Tony Abbott)

I met Billy McMahon when my first job in Sydney was as a courier. He was a regular customer and his office was in the Boulevard building in William Street. He was friendly, charming, funny and just a little bit eccentric. With those big ears he was a caricature of himself. It was impossible to dislike him.

Dear old Billy’s legacy is being overtaken by a bunch of amateur darth vaders whom it’s impossible to like.