It's dog-eat-dog in the cutthroat world of TV news. And other media tidbits of the day.

First on … where? When a woman was shot by police after reportedly threatening them with a knife in West Hoxton in Sydney’s south-west yesterday, Channel Seven sprung into action, and managed to secure a photo of the woman outside the Hungry Jack’s outlet holding said knife.

The image led Channel Seven’s news, but it also led everyone else’s. Insiders at the leading network were baffled at the treatment given to the image. Channel Nine was the first to repurpose it, cropping it and blurring it to remove the blaring Seven watermark (see first image for a still from Seven’s news, second image from Nine’s news — note the small “Pic: CH 7” in the corner below Nine’s logo). But then, not to be outdone, Channel Ten did the same thing, cropping the image still further to remove the Channel Nine logo. 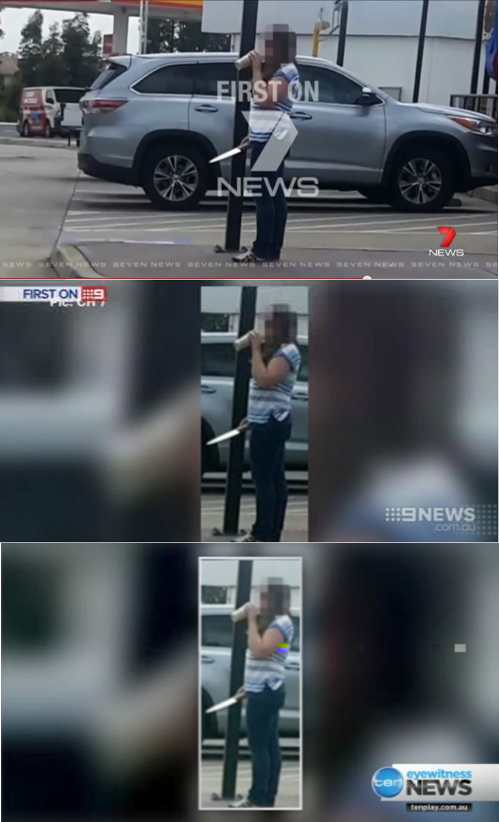 Crikey understands Seven will probably be inquiring into how the photo ended up on first Nine then Ten, but Channels Nine and Ten will probably be protected under the Fair Use clause of the Copyright Act. Repurposing images that first air on a rival network has a long and infamous history — this is unlikely to be the last time this happens. It’s dog-eat-dog in the 6pm news battle, between ratings leader Nine and former leader, Seven, with Ten sniping away at 5.30pm under former Nine and Seven News and current affairs boss, Peter Meakin — a strong defender of fair dealing of other network’s vision.

Channels Nine and Ten were contacted for comment. It’s worth noting the image is on the front page of The Sydney Morning Herald today — with a credit to Seven News. — Myriam Robin

Stokes sues blog — has an early win. A blogger being sued for defamation by Seven West Media chairman Kerry Stokes and network representative Justine Munsie has had his defence struck out by the New South Wales Supreme Court.

Shane Dowling, publisher of the fiery Kangaroo Court of Australia blog, was dragged before the courts for an article last February accusing the power couple of lying to and, when that failed, threatening the Australian Federal Police over a search warrant investigating claims Channel Seven paid Schapelle Corby for an interview. Channel Seven and Stokes deny the claims.

Dowling, who represented himself during the proceedings, apparently did himself no favours in repeating what the judgment described as “… scandalous and unsubstantiated assertions … of personal impropriety on the part of the plaintiffs.”

Among accusations of abuse of process, judicial bias, attacks on his freedom of speech and an attempt to have Stokes declared a frivolous and vexatious litigant — all ruled to be baseless — the defence raised almost every conceivable justification for defamation from triviality to absolute privilege. The judge was less than impressed.

“It is quite unclear how a number of the defences could apply,” he wrote. “For instance, the defence of absolute privilege could not apply to any of the matters complained of, none of which were published in the course of the proceedings of a parliamentary body or a court or tribunal.”

On his website, Dowling has been characteristically scathing of the process. After being found guilty of contempt of court for violating an early super-injunction he wrote:

“[Stokes] is now a party to what will go down in history as one of the dumbest … judgments any court anywhere has ever seen.”

Dowling will have 21 days in which to submit another defence. — Paul Millar

Domain rolls out agent-equity model. Weeks after buying up the rest of Metro Media Publishing, Fairfax’s Domain is rolling out the agent-equity model that made MMP’s founder (and current Domain CEO) Anthony Catalano rich. In a statement today, Domain said it had sent expressions of had been sent to agents in New South Wales and Queensland today. THe model’s already been rolled out in Victoria, South Australia and Western Australia.

The agent-equity model sees real estate agents directly buying into their local papers, then getting a cut of the profits from real estate advertising that inevitably keep small papers afloat.

In a statement, Catalano called the rollout the “game changer the industry has been calling for.”

“The great strength of the new business model and today’s announcement is that it is the first time a substantial, expert and experienced national publisher has joined with the industry to create more competition and better products.

“We have been road testing the proposal and the response has been enthusiastic.”

Domain, one of the most profitable parts of the Fairfax, is the second-placed real estate advertiser behind realestate.com.au, which is majority owned by News Corp. — Myriam Robin

Sports bet. Now that is what you call a payout — the English Premier League has sold the TV rights for the competition for the three years from 2016-17 for a record 5.136 billion pounds (more than $10 billion), some 60% more than what is currently being paid. The Murdoch clan’s Sky and UK telco and pay-TV wannabee BT won the auction, stunning analysts and media commentators with their bids. Sky, with more to lose from its current dominant position, will continue to screen 126 games, including the Sunday games, which are the most watched. To do this Sky offered 1.3 billion pounds each year. That’s around 10 million pounds, or more than $19 million a match. Given that teams like Chelsea, Manchester United and Manchester City have playing rosters valued in the hundreds of millions, the day it not far away when (thanks to the boost from the broadcast contracts) we could see two of the top sides in the EPL playing matches where their 20-odd players are worth a combined $1 billion or more.

BT, which muscled its way into the rights three years ago, will pay 320 million pounds a year for three years for the right to show 42 games a year. The big winners are the clubs in the EPL and their players (not to mention agents and other hangers-on). As the Financial Times said in its report, “time for another Bentley”.

Sky said it would seek to fund most of the additional spending by cost savings. Both Sky and BT lose money on this football coverage — but they make up for this by selling customers TV packages and high-speed broadband, respectively.

The BBC last week agreed to pay 206 million pounds (nearly $400 million) over the next three years for its Match of the Day highlights and several other programs where the EPL vision will be used. By way of contrast, the AFL currently gets $1.253 billion for the current five-year contract with Seven and Foxtel/Fox Sports. Media reports say the AFL wants more than $1.5 billion for its new contract in talks due to happen this year (that’s if the ownership of Ten is resolved). That’s less than half what the EPL will be getting a year under this new contract. — Glenn Dyer

Video of the day. Another scalp for Sky News’ first ever Walkley-winning interviewer David Speers. A little appreciated line from Senator Sean Edwards during the train-wreck submarine interview: “We cannot subrogate the need of Australians to be the best-protected nation in the country”. Opposition Leader Bill Shorten’s office has been helpfully sending around a transcript. 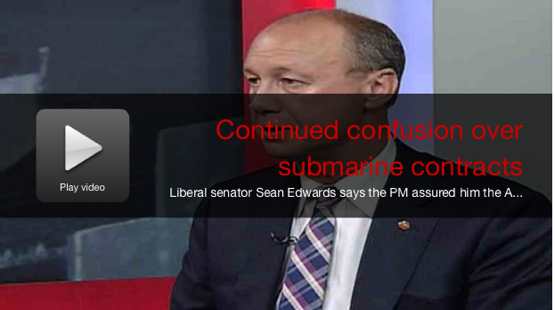