A huge week in state and federal politics kept Tony Abbott in the glare of the media spotlight.

Tony Abbott this week became the third prime minister in a row unable to make it through a first full term without a party room vote being called on their leadership. The public response appeared to be a mixture of joy from those who never liked the PM, to bemusement from much of the disconnected mainstream, to constant speculation from the media, who grabbed any tiny utterance they could over the weekend with the only potential challenger giving them very little to work with.

WA Liberal Party backbenchers Luke Simpkins and Don Randall enter our index at fifth and ninth respectively, after the two MPs proposed and seconded the leadership spill vote, with Simpkins’ reference to Abbott’s “wartime footing” as PM resonating in the broader media. Arthur Sinodinos also came forward to voice dissatisfaction with Abbott sending traditional media into overdrive, though his opinion was of little interest on social media where punters preferred to speculate on the big names.

State politics took a back seat comparatively, with Queensland ALP leader Annastacia Palaszczuk seeing a drop in overall coverage, though Mike Baird’s NSW leadership was tied to Abbott’s fortunes in poll results, which will likely continue to the coming state election. 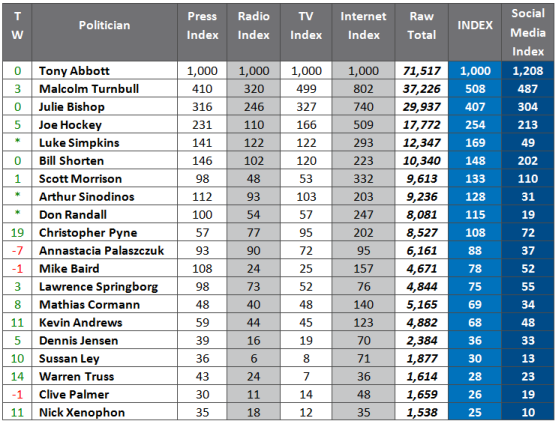 No change in order from last week, with Social Services Minister Scott Morrison narrowly missing our top five as some speculation placed him in a treasurer’s role in hypothetical leadership changes.

Jay Z’s face of horror made great television as Kanye West tried his Kanye Best to prank Beck at the Grammy’s. And in that moment, we were all Jay Z.

Fighting the right and their paaarrrrrties