The Queensland LNP's new leader Lawrence Springborg hopes to prevent Annastacia Palaszczuk from forming government by triggering a byelection in the Labor-won seat of Ferny Grove. 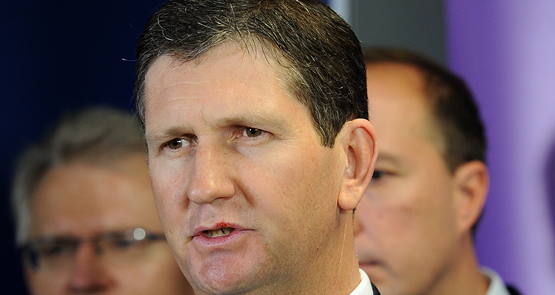 With counting in the Queensland election just days away from completion, the Liberal National Party appears to be gearing up to play constitutional hardball ahead of what looks like being its final days in office.

It is clear now that Labor has done what it needed to do to win office, securing 44 seats in the 89-seat Parliament and further gaining the support of Nicklin independent MP Peter Wellington. This marginalises the two re-elected MPs of Katter’s Australian Party, not to mention the 42 members of the LNP.

In the normal course of events, the de jure Premier of Queensland, who remains Campbell Newman, would tender his resignation to the Governor, Paul de Jersey, and advise him to hand the reins to Labor leader Annastacia Palaszczuk.

However, the new leader of the LNP, Lawrence Springborg, is forcefully holding on to the contention that a legal quibble concerning the seat of Ferny Grove leaves the entire result up in the air.

With only a handful of late-arriving postal votes to be counted, Labor’s candidate for Ferny Grove, former senator Mark Furner, holds an insurmountable lead of 414 votes. The legal sticking point concerns the status of a Palmer United Party candidate, who was reportedly ineligible to run by virtue of being an undischarged bankrupt.

The Electoral Commission of Queensland proposes to refer the matter to the Court of Disputed Returns after counting is resolved, as it will be over the next few days. No doubt the LNP is casting its mind back to the Liberals’ win in the Mundingburra byelection in 1996, when it tipped Wayne Goss’ Labor government from office after winning a voided result on the rematch.

Labor asserts that Newman is obliged to resign at the close of business today, prompting Springborg to accuse it of “trying to snatch the keys to the Executive Building”. Springborg argues that since Ferny Grove remains in dispute, neither party can lay claim to 45 votes in Parliament, and it is thus appropriate that the existing government should carry on in caretaker mode.

This would seem to be a rather interesting proposition, and not just to your bush lawyer correspondent.

The Electoral Act requires that the ECQ return a writ to the governor listing all elected members upon the completion of counting, at which point legal challenges to the results may ensue.

Certainly that was what happened in 1995, when the Labor member elected from the disputed count in Mundingburra took his seat and kept the Goss government in power for a further seven months.

Since such challenges proceed for however long it takes the creaky wheels of justice to spin, the notion that a caretaker administration should continue beyond the declaration of the result is exceedingly novel.

Making matters worse for the LNP is that Newman’s formal tenure as a parliamentarian will shortly be coming to an end, so it is not open to the Governor to follow the path of least resistance in leaving it to him to test his position on the floor of Parliament, as has been done in similar situations in other states.

So presumably Springborg has in mind either Newman drifting along as caretaker Premier despite not having a seat, or himself being commissioned to take on the role for an ill-defined duration despite his incapacity to win a vote in Parliament. Either arrangement, for however long it was proposed to last, would rely upon Parliament not being summoned.

Writing on Antony Green’s blog, Australia’s leading authority on electoral law, Graeme Orr of the University of Queensland, went so far as to say that such a course would amount to “a constitutional coup, however temporary or prolonged”.

So it would seem likely that unless the LNP changes course, or the KAP members resolve the issue by declaring their hand for Labor, de Jersey will find himself in the position of having to show Newman the door so he can commission Palaszczuk to form a government that will then stand or fall on the floor of Parliament — a Parliament that will include Mark Furner, unless and until a court ruling says otherwise.

Once Labor is established in office, any hope the LNP might harbour of getting its hands on Ferny Grove is likely to prove forlorn — assuming a byelection is in fact ordered, which is far from the foregone conclusion that LNP rhetoric makes it out to be.

As no less a political commentator than Osama bin Laden once observed, “when people see a strong horse and a weak horse, by nature, they will like the strong horse”. Certainly this insight has been borne out by the history of byelections held on the watch of precariously placed Australian minority governments.

The Liberal win in Mundingburra in 1995 transpired after Labor was left clinging to power by a surprisingly bad election result seven months earlier, the Coalition having successfully harnessed an antipathy towards the Keating government that would shortly reduce Labor to two seats in Queensland at the federal election of March 1996.

The position the LNP presently finds itself in in Queensland offers no such grounds for optimism. A far better analogy is the Mulgrave byelection of December, 1998, held six months after Peter Beattie came to power. Voters on that occasion took the opportunity to firm up the new government’s hitherto precarious grip on power, granting it a 45th seat and the status of majority government.

It was a similar story for Bob Carr in New South Wales and Steve Bracks in Victoria, who, respectively, led Labor to office with a one-seat majority in 1995, and as a minority government with the support of three independents in 1999. Within a year of coming to office, byelection victories in seats formerly held by the Coalition had delivered Carr one extra seat, and Bracks two.

Even the fourth-term Labor government presently in office in South Australia went from minority to majority after winning the Fisher byelection in December, and came remarkably close to adding the blue-ribbon seat of Davenport to its collection at another byelection held on the same day as the election in Queensland.

If a defeated and demoralised LNP believes a rematch on a technicality will cause the voters of Ferny Grove to recognise the error of the decision they made on January 31, it very likely has another thing coming.

All of which revealingly shows that Tories have no real interest in constitutional government, only in clinging to power.

Well according to the ABC news, Campbell Newman has now formally tendered his resignation to the Governor.
[http://tinyurl.com/p8x7ll4]
So it sounds like game over for Springborg now.

Paddy, unfortunately no. Springboard is claiming that he can remain as “caretaker” until the court settles the Ferny Grove result. The law in this matter is quite clear. The person elected in Ferny Grove (who happens to be ALP) can take his seat. He remains a member of Parliament unless and until a court rules otherwise, in which case there would be a by-election. With the support of Wellington, the ALP have 45 seats; i.e. a majority. By refusing to recognise this Springboard is behaving as I said in my first comment.

Am I right in thinking Lawrence Springborg is a member of the National Party, and head-ex head?-of a Party which calls itself the LNP? Probably just confused. What ever he is he looks very dodgy.

PS: I know exactly how the LNP works throughout the rest of Australia, but in QLD everything seems to work in reverse.