Veteran broadcaster Howard Sattler makes a comeback. And other media tidbits of the day.

Nielsen is watching. One of the great things about Twitter is that it feels like an ephemeral medium. You can sit on the sofa in your underwear sending out drunken tweets about Q&A, safe in the knowledge that it won’t come back to haunt you. Twitter is the digital version of talking to yourself and not knowing if you’re being heard.

But that changed late last year when market research giant Nielsen introduced Twitter TV Ratings, which gathers up all the tweets relating to TV programs and crunches them into an algorithm to look at which shows are being tweeted about and what is being said. The most tweeted-about commercial TV shows last year were the NRL grand final, the Bathurst 1000 and the finals of the three biggest reality TV shows The Block, The Bachelor and X Factor.

Nielsen has just announced a refinement to that data, which matches it up with data from tweets about brands. At the launch last week, various people from Nielsen revealed this with the sort of evangelical fervour usually reserved for the Second Coming. As I never watch commercial TV and mainly read Twitter for #auspol (and #emergencykittens), this was confusing. Who on earth tweets about something as mundane as Pepsi? And if they did, why on earth would anyone (apart from Pepsi) actually care?

It turns out that if you tweet about brands and, separately, a commercial TV program, Nielsen can match up all that data and sell the information to advertisers, who then target their ad and social media spend more effectively. Twitter is a digital version of word-of-mouth, which, instead of floating into the ether, can now be collated and analysed. Which means, of course, that if you are not paying to join something (Twitter, Facebook, Instagram), you are the product. If you’re happy with your personal data being monetised by someone else and on-sold at a profit, then keep on tweeting about the footy. The rest of us have very important work to do and will stick to #libspill. And pictures of cats. — Margot Saville

Sattler returns. Veteran Perth broadcaster Howard Sattler yesterday took to the airwaves once more. The former 6PR broadcaster, who was sacked after asking former prime minister Julia Gillard whether her partner was gay, has launched The Sattler Files — an online streaming talkback radio station he plans to air 9am to 5pm every weekday from his home.

Yesterday’s launch was a little bumpy. Perth lord mayor Lisa Scaffidi was meant to launch the show but didn’t turn up, while technical problems meant the broadcast didn’t actually begin until 9.15am.

Before he was fired, Sattler was one of Perth’s most influential media identities. He’s still suing Fairfax-owned 6PR for unfair dismissal following his sacking– Myriam Robin

A return to familiar ground. Yesterday’s Four Corners covered the plight of Indonesian death row inmates and Australian citizens Myuran Sukumaran and Andrew Chan, who are expected to be executed at the end of this month. The reporter on the feature was Mark Davis, until recently one of the mainstays of SBS’ Dateline. The plight of the Bali Nine inmates is familiar ground for the veteran TV journalist — he gained exclusive access to the Kerobokan Prison prison to report on the pair in 2010, securing a Logie nomination in the process in the “most outstanding public affairs report” category. Davis hasn’t joined the ABC permanently — last night’s report was done under a freelance arrangement. — Myriam Robin

Madder and madder. If you thought leadership spills were stressful for politicians, spare a thought for satirists. When I speak to Shaun Micallef on Friday afternoon about the upcoming fifth series of Mad As Hell, the comedian quickly admits he may have a challenging week ahead. While he doesn’t sound flustered, it seems clear he’s mentally working through the coming days.

“You rang me in the middle of my research, which just involves watching the ABC News website — not terribly journalistic of me,” he said.

Just 10 minutes ago, two Western Australian Liberal backbenchers had announced they’d call for a spill motion at a party room meeting on the following Tuesday. The announcement could have posed a critical challenge for the Mad As Hell team because they shoot their episodes every Tuesday afternoon, to be aired on Wednesday evenings.

“We’ve never had this before,” Micallef says. “Occasionally a story will crop up that we miss, but nothing that’s as important as this, which is sort of our bread and butter. It could be worse — they could be doing the leadership spill on Wednesday, the day we go to air, which would make us more out of date.” — Read Ben Neutze’s full preview of season five of Mad as Hell on Daily Review

Front page of the day. We wonder if this was intentional … 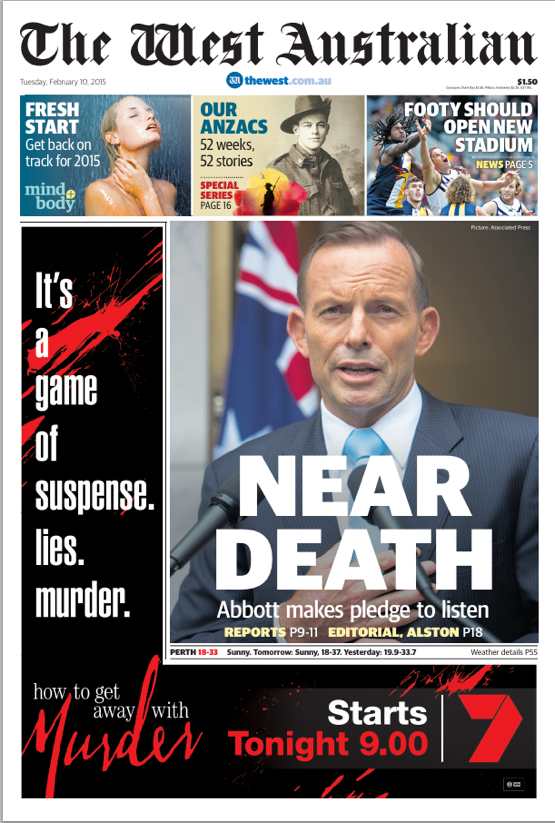