Australians are opposed to force-feeding ducks and geese for foie gras, but we happily chow down on chickens and cows raised equally inhumanely. Is it time to rethink the controversial dish? Mat Drogemuller explains. 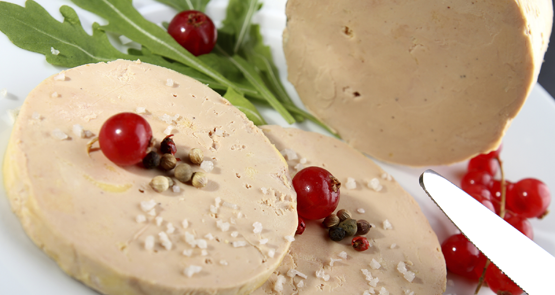 Foie gras is on the lips of every French man and woman in La Roche-sur-Yon right now, where a private prosecution is underway. Brought to the French court by animal advocate group L214, the case could fine foie gras farmer Ernest Soulard up to 30,000 euros for cruelty to animals.

We don’t make foie gras in Australia. To create the engorged liver that gives foie gras its silky, buttery texture, geese or ducks are force-fed by tubes, which makes it a controversial dish. But is it really so bad, compared to the normal contents of our dinner plates?

Australia also legally shuns “real veal”. That’s because to create that prized, white meat, baby cows must be housed in small crates their entire (albeit short) lives, so they cannot move and exercise, inhibiting muscle development. Their bodies must be devoid of iron and they will become anaemic and diseased — but delicious.

Foie gras, like veal, has its detractors. On the other hand, many people, including celebrity chef Anthony Bourdain, argue that the practice of force-feeding birds is not cruel, or at the very least no more cruel than raising, slaughtering and eating any other socially and morally acceptable animal product. They may be onto something.

Let’s talk about another animal. One that forms social groups. One that knows the faces of its friends (and, presumably, enemies). One with a “vocabulary” of over 20 noises, signaling everything from danger to delight. No, I’m not talking about monkeys. I’m talking about the chook.

Chickens enjoy many of the same things that humans do: lying in the sun, looking for food, taking baths (although they take their baths in dust). However, a chicken raised on a farm in Australia is unlikely to experience any of these things. More likely they will spend their lives crowded into a filthy shed with thousands of their fellow chickens, where they will grow so quickly that their organs will fail and they will be crippled under their own weight. And that’s if they’re lucky enough to be born with the ability to produce eggs. The majority of egg-laying chickens in Australia are battery hens, a practice that, although illegal in the UK, several European Union states, and California, is still widely practiced in Australia.

Based on how we treat these bright, plucky (pun intended) animals, why is foie gras production so bad? Although the method of feeding ducks and geese through tubes that are forced down their throats seems horrific, ducks and geese don’t have gag reflexes, so they can’t actually choke. And when you take that out of the equation, what’s really left but a practice of force-feeding poultry, no different to the force-feeding chickens (and cows) experience in Australia, and all over the world, in order to bring them to slaughter more quickly and produce more meat. Why should we be opposed to foie gras when we’re happily filling our bellies with equally unethical meat?

Why is veal such a controversial dish? “Those who denounce veal often cite the young age of the animals when they are killed, when they are in fact older than many pigs going to slaughter.” That’s a quote from NBC’s Hannibal, but I checked it and it’s true. “Fattening pigs”, used for pork and bacon, are killed when they are between four months and one year old (the natural life span of a pig is around 15 years). Cows killed for veal only get at most five months out of a potential 20 years of life.

Thanks to the miracles of growth hormones and selective breeding, we can slaughter chickens at six weeks (they live for 10 years), beef cows at two years (they live for 20 years) and sheep at three to 10 months (they live for 15 years). But these facts do not alarm us, or, if they do, we do not protest against them, and they will not stop us from eating the meat from these animals. After all, we can’t make a difference individually, and everyone else is doing it.

And that, essentially, is the reason why foie gras is so actively reviled. Simply because the method of producing the meat product is more particular — particular enough to seem barbaric. It’s easy to ignore the plight of chickens and cows (although the more you know, the harder it gets): they are born, they live (briefly), they die. Then we eat them. Everything along the way is secondary.

Aren’t we kidding ourselves if we think that slurping foie gras at an upscale restaurant is worse than cracking a few eggs into our frying pans every morning? We have to question the logic of laws that ban foie gras and “real veal” production, when the methods involved in that production are on par with the practices we take for granted in other meat products. We are right to question the ethicality of our food. But we shouldn’t pretend that the geese, ducks or deer raised overseas have it any worse than the chickens, cows and other animals raised for slaughter in this country.

Your Sunday roast, brought to you by ritual animal slaughter

How we are breeding the next swine flu or bird flu

On this issue, as with many events in the lives of homo sapiens, our species tends to believe rather than analyse. Little wonder that with so may far more complex controversies around, even affluent reasonably intelligent people such as Crikey subscribers, psychological defences such as cognitive dissonance enable us to not see the enormously important woods for the delightfully supportive trees we worship.

When are we going to realise the world’s human population is the cause of all this? It can’t go on, if we are to retain any shred of our humanity.
And foie gras eaters? Go foie yourselves

Fois Gras, true Veal and cage-raised eggs are out of favour with aussies because we see that producing these so-called delicacies deprives the animal any chance of a leading a natural existence.

Backyard chooks are making a massive comeback because of the pleasure gained from rearing your own flock, and having the chooks contribute to the garden with their droppings and pest management. They can stay as valuable and useful members of the family for years beyond their egg-laying age, and those that are happy to do so can turn them into a roast. Compared to battery hens that are discarded after 18 months of life just because their egg-laying rate drops by 20%.

The marketing practices of Coles and Woolies that drives price with no regard to production values is starting to fall out of favour.

People are starting to wake up and take more interest in where their food comes from and the journey it took to get to our homes.

And that’s a good thing I think!

The author makes this out as an argument that foie gras and veal is alright.

It’s an argument that battery chooks and industrial meat production in general are also terrible.

It’s an argument that battery and industrial meat (and egg) production should be outlawed, not that cruel practices like those needed for foie gras are acceptable.

I have my own happy backyard chooks that give me eggs – and, when I slaughter and butcher them myself, meat. But I never eat industrial chooks and strongly believe those methods should be banned on both ethical and health grounds.

Bob is right. This is a very strange article. Pointing out the hypocrisy of meat eaters who oppose foie gras is valid, but the existence of factory hens doesn’t make foie gras or veal ok. Cruelty to animals is terrible in all of its forms and we can do better.