Despite claims that the cause of reform is lost, there are some things Tony Abbott can do that will be both good policy and good politics. 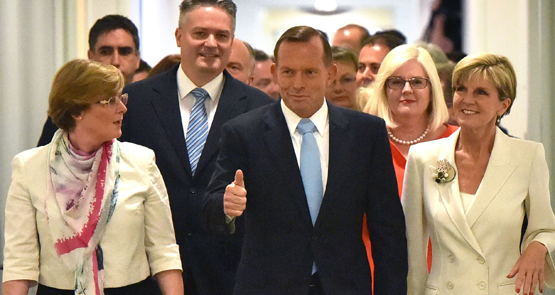 In the last 24-48 hours, you might have noticed business sinking into a funk about the lack of resolution of the Liberal leadership issue. Business leaders have emerged to bemoan both the likely continuing instability within government,  and what they fear is a looming abandonment of “economic reform” by the government in order to shore up its electoral fortunes. Dark invocations of Australia becoming like Greece have appeared in the Financial Review, as though Tony Abbott had just morphed into Alexis Tsipras. Chris Richardson, speaking ex cathedra, lamented that “good policy and good politics are now pulling in almost diametrically opposed directions”.

What business is more likely concerned about is not that the government won’t be politically able to undertake reform in the national interest, but that it won’t be able to undertake reforms in the interests of business — industrial relations reform, in particular, focused on cutting wages and conditions. And is the policy and political imperatives of the government now pulling in opposite (indeed, diametrically opposite!) directions?

In fact, that needn’t be the case. There are a number of things that Tony Abbott can do that would be both good politics and good policy. They needn’t be opposed or even discordant, because they would help both the economy and the government — even if he ends up not leading it.

1. A new treasurer. Malcolm Turnbull is needed in the Treasury portfolio ASAP. Turnbull can be a brilliant communicator, and at the moment those talents are wasted in the comparative backwater of Communications, where he spends his days defending his Copper Magic version of the NBN and fulfilling the government’s agenda of attacking the ABC. He must be moved front and centre in the government’s communications efforts.

2. A clearer, simpler economic narrative. The current narrative is deeply confusing. The government says it inherited a fiscal mess from Labor, but the deficit has dramatically worsened on its watch. It says it needs to curb debt and deficit but also that the economy is too weak to sustain serious spending cuts. It says it faces a revenue problem, but it has given away tens of billions in future revenue by dumping the carbon price, mining tax and super tax changes.

Given the chance to offer a clear narrative about the government’s direction in 2015, Abbott fumbled the opportunity last week. The budget, delivered by Turnbull, should be the specific policy detail of the government’s economic vision, centred on:

3. Get an experienced hand into the PMO. Abbott needs someone who can do the basics right. The PM’s speeches in the last fortnight have been diabolically bad, as if they’d been written in a hurry late the night before. Different scenarios can and should be anticipated and prepared for. And the bitter lesson that Labor learned — don’t offer the electorate solutions to problems they don’t know exist — hasn’t been fully learnt. While the Productivity Commission is being used to condition the electorate to the possibility of industrial relations reform at the moment, the government pulled a GP co-payment and higher education reform out of its backside (or, more likely, a Treasury bottom drawer).

4. Remove the dead wood. OK, this is the impossible one — Abbott really can’t afford to upset anyone in the party currently, but is there anyone who seriously argues that Abbott can afford not to make the best use of available ministerial talent? His ministerial line-up would be vastly improved not merely by dumping Hockey, but removing Peter Dutton, who failed badly in Health, Kevin Andrews, who is in the twilight of his career anyway, and George Brandis, who has been a serial embarrassment in a key portfolio. Mathias Cormann, pretty much the only competent domestic portfolio minister in 2014, should have his role expanded (he spent the year doing two jobs, remember). Andrew Robb should be brought closer to the action than Trade, and Christian Porter should be doing more than being the PM’s rep at all the dinners Abbott can’t make it to.

5. Stop fighting. Abbott is a better, more relatable figure when he’s not in relentless partisan mode. He is the national leader, not just the leader of the Liberal Party. He told his party room he’s not very good at fighting the Liberal Party — try telling Malcolm Turnbull that, Tony — but he’s good at fighting Labor. The problem is, as Prime Minister his job is not to fight Labor, but to lead the country, and that sometimes entails being above the fray, where the better aspects of his personality can be on display. That might make voters, who appear to have stopped listening to him, start paying attention again, enabling him to get his message across more effectively.

One final thing. Abbott should leave Peta Credlin right where she is. One of the more absurd claims that has emerged from all this is that his chief of staff is some appalling blockage of the party will flowing to Abbott, because she’s too intimidating or wields too much power for ordinary MPs to talk honestly with. I’ve worked with Peta Credlin, and from experience the only thing you need to be scared of when you talk to her is not presenting a sound argument backed by evidence. If that scares you, you shouldn’t be in public life.

Each of these measures reflects the fact that for Abbott, from here good policy can and must be good politics from here, and vice versa, because what’s at stake is not just his government but the economy. It’s impossible to see Abbott lasting as prime minister, but maybe he can leave a better legacy than the one he would have left if he’d been dumped from the job yesterday.

Agree but I would add

8. Reduce Credlin’s power. She is merely a servant not an elected MP.

Just one more thing you missed out on, call a double disolution to save Australia the further embarassment’s of Captain’s calls.
Item 2 is impossible, the LNP has no plan for economic improvement. If it can’t be dug up (or lives/grows on a farm) they are not interested (reference copper magic NBN an example).
“While the Productivity Commission is being used to condition the electorate to the possibility of industrial relations reform at the moment”; thanks to the PC for telling us all what we always knew….workchoices is not dead (another pre-election lie by the Cap’n).

Malcolm Turnbull as treasurer… under Tony Abbott as PM.
Surely you know you’re dreaming Bernard.
You keep asking/pleading for this dysfunctional rabble to behave like a bunch of grownups.
Since they were elected in Sep 2013, they’ve repeatedly proved they’re not fit for purpose. They’re toast.

The article’s title momentarily had me thinking it might be about actual economic decisions rather than another choreography exercise with metaphorical deck chairs.

2. Take Joe Hockey, George Brandis, Kevin Andrews and all the other dead wood with him (will anybody be left)

3. For gawd’s sake Tony, stop talking about what Labor did in government. I doubt even the most vacuous right winger still thinks that is relevant.

4. I don’t know, develop a philosophy that isn’t about keeping the other guys out, or doling out favours to big business, and maybe build some policies around that.

I have no idea what Peta Credlin is like to work with, but if, as Bernard claims, you have nothing to fear if you present a sound argument backed by evidence, then she clearly wasn’t involved in the Medicare co-payments, the university sector reforms, the dole payments fiasco, the plan to dump the RET, etc, etc ……

So they either got through the gate, in which case she isn’t very good at her job, or perhaps she isn’t the great wielder of power that some would have us believe.