Echo chamber: where have all the MPs gone?

The House of Reps and Senate are usually nearly empty during parliamentary debate. So what do our elected representatives do all day? Former Greens staffer Colin Jacobs gives a sneak peek. 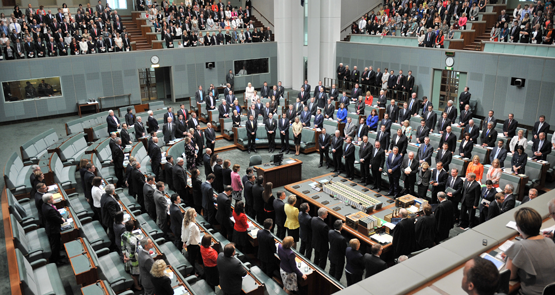 Yesterday, our MPs returned to Canberra to once again take up what most Australians would consider their legitimate “day job”: legislating inside the Parliament. To many, this conjures up images of rowdy debates, a spirited back-and-forth with the minister, and the point-scoring of question time. The reality is something quite different.

It is increasingly common nowadays for parliamentary speeches to be put up on YouTube or Facebook. Many punters have noticed that in these videos there is usually only one or two other MPs in the chamber. “Shame on them!” is sometimes the reaction, which is understandable if one imagines an MP’s chief job is listening to the arguments and weighing the merits of each piece of legislation. In fact, the reality of the modern legislative machine completely obviates the need for this sort of participation by the vast majority of parliamentarians.

One reason for this is that, with few exceptions, the major parties vote as a bloc on bills. Whether to vote a bill up or down is decided in the party room, not during the parliamentary debate. Except in the case of high-profile or controversial legislation, that party decision in turn is likely to be made by the minister or responsible shadow. Ministers have little time to engage in extra homework outside their brief, and backbenchers are unlikely to have personal opinions on the Textile, Clothing and Footwear Investment and Innovation Programs Amendment Bill 2014. With the party vote decided, and no reason to read long, technical or non-controversial legislation, for most MPs the passage of a bill boils down to being told by the party whips which side of the chamber to sit on when the bells ring for a vote.

Another reason is that, even with controversial legislation, the real debate is usually had in a different forum. Whether on the op-ed pages or behind closed doors with industry lobbyists, the details are worked out and hashed through before the bill is presented to Parliament. The battle lines are drawn and team guernseys handed out long before the first MP rises to speak.

This isn’t to say there is no debate at all. For controversial legislation, dozens of MPs will make a contribution and put their thoughts on the record in a second-reading speech. Sometimes they are passionate about the issue; other times they are dutifully reading into Hansard talking points provided by others in the party. Near the end of the process, when the bill is debated in detail, genuine questions are asked, oversights are addressed and amendments are often agreed to. This stage is once again in the hands of the responsible minister and portfolio holders, so apart from them and a few advisers (and in the case of the Senate, Nick Xenophon, who seems to have amendments for every bill), the chamber will still be nearly deserted.

Because the majority of sitting hours are spent on “government business” (dealing with the government’s legislative agenda), time in the actual chamber is only a relatively small part of a politician’s routine, even in sitting weeks (of which there are about 20 per year). Of course, when the bells ring for a vote, MPs will heed the call; they also pop in for the opening of the day’s business (which still includes the Lord’s Prayer) and question time, when full benches of rowdy MPs provide the backdrop for the night’s TV news grab. Parliamentary speeches are still important when they arise, from 90-second statements (time is scarce in the Reps) to a 20-minute adjournment speech at the very end of the day. Some MPs grab hold of any opportunity they can get to rise to their feet, while others make rarer cameos on the speaking list. As a rule, you go in, say what you need to say, and then head back to the office.

So what does an MP’s day actually look like? The calendar is likely to be a full one, starting early with getting on top of media and the day’s crises and then filled with stakeholder meetings, party-room debates, industry morning teas, and visiting lobbyists. Like any busy professional, there is always an unending amount of email and other material to read, but it’s in the meetings that take place in these weeks that MPs can build up the intellectual capital and gain an insight to what’s really going on in the real world. Committee work is also a huge undertaking for many MPs, especially in the Senate. It’s in front of committee inquiries that a lot of the real policy work is done, and at that distance from the limelight the theatre of partisanship is often a bit more subdued.

Of course, party gossip, plotting with or against the press gallery, and speculation on leadership take time too.

Given all this, are Australian citizens getting a raw deal from their local MP? Should we be worried that they are almost always voting on bills they have never read? It’s hard to deny the allure of a world where pollies spend more time on issues and less on show business. But the fact is most MPs work long hours just trying to keep up with the issues in their portfolios or electorates. Being across the entire legislative program is beyond any one person, so the they are forced to divide and conquer.

The cost is giving a speech to an empty chamber without an audience. No audience is a tough audience, which may explain why so many parliamentary speeches sound like they were written for nobody to hear.