A former Kerobokan prisoner pleads: spare the lives of the Bali Nine 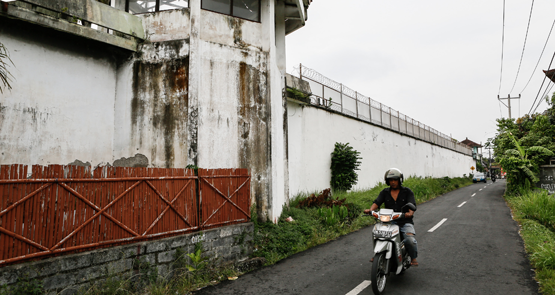 I write this letter in response to the recent execution of six inmates in Indonesia, with the hope that it will encourage you to reform drug policy and grant clemency to death row inmates convicted on drug charges across the nation, so that they may have the chance to re-enter society as reformed and rehabilitated persons capable of leading healthy and productive lives. I am aware that there are many people who oppose your decision to carry out the death penalty, including the many governments of various nations, members of the presidential cabinet, activists and human rights groups. However, with this in consideration, I would like to offer a different perspective — one that comes from my personal experiences with two of the individuals currently facing execution in Indonesia. In the name of life, I express the sincere hope that this letter finds you.

In 2009, at age 17, I was convicted on charges for possession of a Schedule I narcotic. I was sentenced to six months’ imprisonment — a short period by Indonesian standards. The court was clement on account of my age, and I started my prison term at the end of 2009 in LP Kerobokan in Bali. Though the system should clearly distinguish between adults and minors, I was put with the general population of adult prisoners, which included violent offenders convicted of rape, murder and terrorism.

It was during my time in the penjara (jail) that I met two Australian inmates, Andrew Chan and Myuran Sukumaran, who I would find out had received the death penalty for attempting to smuggle heroin out of Bali and into Australia. At first I avoided contact with most other inmates. One day, however, Andrew and Myuran — who goes by Mayu — came to the newcomer block to help me with the transfer process so that I could be moved to Block B, where foreign prisoners are held. They had heard from other inmates that a 17-year-old had arrived at the prison, so they came looking for me to offer their help. I was hesitant at first; the first thing to learn if you are incarcerated is to avoid being indebted to other prisoners. Kerobokan isn’t as violent or dangerous as many other prisons in the world. Still, I have seen what happens to prisoners who can’t pay their debts — some are beaten or stabbed, others are raped or tortured, sometimes they’re killed. I learned afterwards that Andrew and Mayu didn’t want anything in return; they were simply offering their help because I was young and didn’t have any contacts inside. Over the next few months I would become friends with the two, eventually sharing a cell with Andrew, without the two of them asking for anything in return but my friendship. To this day — five years after my release — I continue to visit them.

Any person who has met Andrew and Mayu can attest that they are very generous and normal people — in fact, it is the first comment anybody will make about them. On days when I didn’t have much to eat, Andrew and Mayu shared their food with me. On one occasion in the prison yard, for no apparent reason, a prisoner tried to start a fight with me. Andrew intervened, declared that there was no problem, and the issue was resolved peacefully. Andrew didn’t respond with aggression; in fact, he prevented the situation from turning violent. This is how he handles situations — calmly and peacefully. I have always been amazed at how the two of them carry themselves in the face of execution. In their short lives, Andrew and Mayu have contemplated their actions more than most people can say of themselves.

During the time I was in prison, drugs were easy to find in LP Kerobokan. Many prisoners were addicts and were taking drugs daily; others drank arak (a local rice liquor). I spent half of my time in prison sharing a cell with Andrew, and in that time neither Andrew nor Mayu took drugs or were involved in distributing drugs. They didn’t even smoke cigarettes.

Andrew leads church services inside the prison, as well as teaches cooking classes and English courses to other prisoners. Myuran also teaches English and cooking classes. In more recent years, Myuran has established an art program, in which he teaches other prisoners how to paint and draw. Occasionally the prison showcases the prisoners’ art in galleries outside of the prison. All the proceeds go into buying new materials for the program.

Andrew once told me in his own words: “I know what it’s like to be a junkie — I’ve been one. But you know, it’s no good. So I got clean. As for what I’ve done [his crime], I just thought it would be a quick payday, nothing more, nothing less. It was stupid and selfish, and if I could tell my younger self not to do it, I would. But I was young and didn’t understand. All I can do is move forward and try help people.” When I asked him what he would do if he would be released, he said he would be a counselor or a pastor and encourage other youths not to make the same mistakes he made. Not surprisingly, Mayu gave similar answers. Mayu is in his final year of university studying art, and is mentored by artist Ben Quilty.

I was released in January of 2010, exactly five years ago. A few months before I was arrested, I was expelled from high school. After my release I went back to school and finished with a 98% grade average, the highest of hundreds of students in the class of that year, and I can say with honesty that I would never have achieved this had I not met Andrew and Mayu. I have witnessed them rehabilitate themselves, and with every passing year they accomplish more and grow into more beautiful people. They have influenced me to do the same. They have changed the lives of many prisoners through their programs and continue to help rehabilitating prisoners by offering education and guidance.

I try to stop responding to people who argue that Andrew and Mayu would have destroyed lives if they succeeded in smuggling drugs into Australia. I wonder if any of these people have served prison sentences — 10 years is a long time to reflect. Andrew and Mayu are different now than they were back then. They are changing lives and helping people recover from a life of drugs. A legal system should not employ a penalty of retribution. Drug smuggling should be illegal, hard drugs are destructive to society, and measures must be taken to stop the import/export and distribution of drugs. Unfortunately, as many well-developed countries have learned in the past, the war on drugs only brings further destruction to society and the death penalty does virtually nothing to deter people from smuggling narcotics and/or other illegal substances. Many nations that are seasoned in the war on drugs have abandoned capital punishment and have moved forward with policy reforms. The death penalty has no place in the 21st century. A government must protect and respect the sanctity of all human life, including those convicted on drug charges. These people have a right to live and deserve a second chance. Your constitution protects this right.

The gist of the ‘argument’ of this puff piece article seems to be that if a criminal is ‘nice’, his sentence should be changed.
I’m not critical of passers by who haven’t had the educational benefits hopefully part of the background of serious journalists; but is it appropriate for a serious media outlet to run stories which would have had trouble making it into the 1940s Women’s Weekly>

As usual, gNormless curdles the milk of human kindness.

What a powerful and humane letter.

Bali Nine ringleaders but opiate drug trade “small fry” Myuran Sukumaran, 33, and Andrew Chan, 31, should be punished but they certainly not be executed for 2 fundamental reasons (1) the death penalty is repugnant state killing that debases the humanity of the society that uses it , and (2) the death penalty for drug smuggling is disproportionate when one considers that there is no censure or even reportage of the Indonesian politicians responsible for 200,000 smoking -related Indonesian deaths annually or for the US Alliance and Australian Lib-Lab politicians deeply complicit in an upper estimate of 18,000 Indonesian opiate drug -related deaths each year (there have been 1.2 million post-2001 global opiate drug-related deaths linked to US Alliance and Australian restoration of the Taliban destroyed Afghan opium industry from 6% of world market share in 2001 to 93% in 2007, the breakdown including 200,000 Americans, 50,000 Iranians, 18,000 British, 10,000 Canadians , 8,000 Germans and 4,000 Australians; see “Afghan Holocaust, Afghan Genocide”: http://sites.google.com/site/afghanholocaustafghangenocide/ ).