Who the heck are Luke Simpkins and Don Randall, anyway? 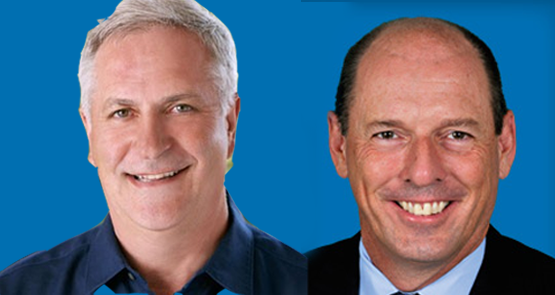 Mutinous Liberal backbenchers Luke Simpkins and Don Randall are probably not going to be given plum ministries now, at least not by Tony Abbott. But who are these two, and what have they done of note before last week?

Simpkins began his political career as the Liberal Party saviour for the seat of Cowan. In 2004, he was narrowly defeated by Labor veteran Graham Edwards — despite an 8.3% swing in Simpkins’ favour. But he went on to capture the seat in 2007 with a 2.5% swing.

Simpkins avoided the public eye for most of his political career, but his push for the spill motion won’t have surprised anyone who had been following him closely — Simpkins, historically, has been outspoken and politically complex.

Simpkins criticised Abbott’s knighting of Prince Philip as “the final proof of a disconnection with the people,” but the Cowan member has had some odd moments of his own.

The Western Australian MP came under heavy fire in 2011 after proclaiming that Australians who unwittingly eat halal food are “one step down the path of conversion” to Islam. During the address, Simpkins paraphrased the Prophet Muhammad: “He reportedly said, ‘The non-believers will become Muslims when, amongst other things, they eat the meat that we have slaughtered.’ This is one of the key aspects to converting non-believers to Islam.”

Perhaps the biggest blunder for the member for Cowan came most recently, again concerning Islam. He mistook a poster for popular Perth nightclub Speakeasy as depicting the Shahada flag favoured by Islamic State jihadists — and alerted social media of the poster’s “terrorist presence” at the Leederville Railway station.

“Last week I noticed black disks [sic] that appeared to be Shahada symbols. Thanks to the Transport Minister and his adviser for getting them painted over quickly after my call,” he tweeted.

Following the MP’s boastful post, his Facebook page was met with a barrage of ridicule. One user thanked Simpkins for leading the “crack down on ISIS promoting nightclubs in Australia”.

He has also argued for banning the burqa, and he was one of only four Liberal members to oppose the apology to the stolen generations, citing that “it could lock in negativity about the future,” and that he would “again back children being taken in this situation”.

Recently, Simpkins took a trip to south-east Asia, where, Fairfax reports, he “illegally crossed the Thai border into Myanmar to attend a military parade” with rebel fighters. Simpkins spent a night at the base of the Karen National Defence Organisation and presented the rebels with an Australian flag.

His colleague Don Randall was another of the MPs absent when the stolen generation apology motion was unanimously passed.

Randall entered politics as a member of the Belmont City Council, running for the seat of Swan in 1996.

Randall seconded Simpkins’ motion to call for the spill, and he would also second many other motions from his WA colleague given the opportunity.

Randall and Simpkins share uncannily similar beliefs on key issues. The two have voted exactly the same on over 30 of the 44 key topics in Parliament. Randall, particularly, is not fond of the Australian Broadcasting Corporation. He voted strongly against funding what he referred to as the “Gay-B-C”.

Randall has had less luck avoiding the media than his WA counterpart. His involvement in multiple taxpayer-expense scandals has given him prior exposure. Randall allegedly claimed over $10,000 dollars in travel for sittings in Parliament and “electorate business”. But after it was suggested that he used one of the trips to visit his investment property in Cairns and another to attend an AFL football match in Melbourne, Randall pledged to repay some of the money.

Randall was unrepentant, though claiming his trips met expenditure guidelines. He told The West Australian newspaper he could “sleep well at night,” because despite visiting his investment property, he says, “it wasn’t as if I got the keys”. It was Prime Minister Tony Abbott who defended Randall’s travel claims and ultimately saved his job.

Ironically, Randall has nearly put the Prime Minister out of a job just 18 months later.

The spill has failed with only 39 of the members forwarding the motion and, if past spills are any indicator, the political future of the two may be in jeopardy.

Not all quiet on the Western front: why WA should be giving Mal nightmares

Thank you Rowan. Cathy Alexander suggested, in another Crikey piece today, that we have a data base on all politicians. This data base should list their policies, their understanding of their electorate, their understanding of leadership, and their reason for being in politics. You have just started this data base.
If the rest of the politicians’ ideas and voting records read like these two, it should be the horror story of the year.

Randall – “How old do you have to be to be able to claim that age of entitlement?”

And don’t forget that “Mr Ethics,” Don Randall was the one who said that leader of the Australian Democrats Cheryl Kernot had “the morals of an alley cat on heat” after she had an affair with Gareth Evans.

Further proof of the fallacy of the old saw,’the enemy of my enemy is my friend’.