What does Malcolm Turnbull stand for? What would Julie Bishop do in the top job? We focus far too much on the "who" and not nearly enough on "what". 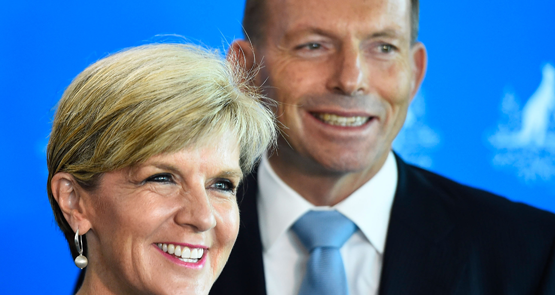 Malcolm Turnbull, Tony Abbott, Julie Bishop; who should be prime minister today? What if none of these is a satisfactory answer? What if the question itself is entirely wrong?

Abbott has carried the Liberal leadership vote for today (no great surprise in the absence of a challenger), but the hiatus will likely be short before the subject returns to the front pages. Australian political debate has devolved into a form guide on who should be leader, where the criteria are personality, communication skills and polling status. Hence you can read thousands of wasted words on whether Turnbull is too arrogant to hold a backbench in line, whether Bishop being female would hamper her as leader, whether Abbott would be more popular if he sacked his chief of staff.

We know remarkably little about the policy vision of any of the possible contenders to be Liberal leader (whether the challenge is made today or in a few months). What would they actually do as prime minister? This question is being treated as irrelevant, a secret from the public, a taboo in which politicians and journalists are complicit. Yet the answer to this question will have genuine impact on the everyday lives of Australians. The personality of the leader will not.

We could be debating what kind of Australia the Liberals want, what the party wants to prioritise and achieve. What policies the government should focus on and, if there is a lack of sound policies, what process could generate them. Should the party move more towards the political centre — and what would that mean for policy?

Voters might like to hear more about whether government spending needs to be cut, and if so, what is a fair way to do it. Road congestion is terrible in big cities, but there’s no money for rail — any ideas? Housing (in)affordability, left to the too-hard basket, is a nightmare for many. We could be discussing the reform of superannuation tax concessions or pension eligibility, water pollution or euthanasia. Perhaps voters would accept a rise in the personal income tax rate if it were spent on the health system and public transport. Perhaps voters would like a cut to income tax rates if middle-class welfare was abandoned. We just don’t know, because no one’s asking.

What does Bishop think about the welfare system? What would Turnbull do about climate change? What is Abbott’s plan on industrial relations? It’s a mystery to voters, and pretty close to a mystery to the Liberal MPs who chose the prime minister today.

All this fuss about who should be leader is worse than an empty-headed waste of time. It’s dangerous in that is has become what we talk about in Australia when we talk about politics.

Back in 1919 German sociologist Max Weber gave a lecture in Munich in which he asked why people get into politics. For some, he argued, it’s power for power’s sake. Being a politician brings status, a feeling of prestige. It satisfies vanity. It allows one to distribute spoils to allies. Weber warned that a charismatic leader who believes in little beyond himself risks being “an ephemeral, narrow and vain upstart” (which may sound families to MPs from both sides).

Weber took a dim view of these “power politicians,” arguing MPs should have a commitment to a cause or an idea, whatever that is. The conviction politician seeks power for purpose, whether their motivation is social, ethical, cultural, ideological. Their conviction might focus on the nation or on all humanity.

Weber was pragmatic; he argued conviction politicians must take responsibility for the cause for which they work, and must be tough and canny. But above all, they must work towards a genuine purpose.

Weber is not around to see today’s Liberal leadership theatricals. He died in 1920, the year after he gave that lecture. This episode in Australian politics, in which possible leadership contenders are being treated as if they could not possibly have a purpose for seeking the top job beyond power for power’s sake, would make Weber roll in his grave.

So here’s a small suggestion, a tip of the hat to Max Weber.

There should be a publicly accessible database on every federal politician in which they explain their political ideology and their policy priorities. The database could be run by the Parliament House Library or by a group of universities (it must be apolitically administered). MPs would fill it out themselves and could make alterations over time. To minimise evasive rhetoric, specific questions would be asked.

In section 1, MPs would explain their political ideology and map out what kind of country they are working towards. What is their vision?

In section 2, they are asked for an opinion and a policy response on key issues that have been identified as most important for voters, using extensive survey work (eg income tax rates, climate change, federal road funding, budget deficits, childcare subsidies).

In section 3, they list their top five policy priorities and explain what they think should happen in each area.

As Weber said nearly a century ago:

“The mere ‘power politician’ … may give the impression of strength, but in fact his actions merely lead into emptiness and absurdity.”

We’ve seen plenty of emptiness and absurdity in Australian politics in recent years, involving both major parties, and it won’t end with today’s Liberal leadership vote. Voters have a part to play in fixing this. If they expected more from politicians in terms of explaining what they want to do on policy, and if voters were more tolerant of the impression of inter-party dissent that these discussions could give, and more willing to give a fair hearing to policies that may cost them money in the short-term for long-term gain, it might just help uncover the conviction that lies dormant within MPs.

what a refreshing concept. Perhaps we could crowd-fund it (politicians never will) and have moderated and hosted by the Parliamentary Library.

What have News Ltd act like they have real journalists?

A website is a great idea. I’d do it if I had some more time!

Great idea but . . .
1. Not sure they can all read and write
2. Party spin doctors would draft the replies
3. Imagine the Qld LNP replies? Strong, Strong and Strong
Maybe each politician could be locked in a cone of silence until they complete their replies?

great idea – and spot on about this and all leadership changes