One MP is channelling Fifty Shades of Grey ... no internet in the bush ... how our government is making people smugglers rich.

NBN satellite pain to continue. Friday’s tip about the NBN Co’s move to limit the amount of bandwidth available to customers signed up to the interim satellite service (ISS) has elicited quite a reaction from readers. Some commenters thought internet users in rural areas with access to 50 gigabytes a month at 128kbps were living in luxury — we hear some users have been told that no more customers can get on the ISS because there’s already not enough bandwidth to go around and the prices others pay to actually get the NBN will make city slickers feel even more grateful for abundance of internet options. One tipster, a business owner in Queensland, says he’s going to struggle to do business under the new arrangements:

“The introduction of these new restrictions unfairly penalises agricultural businesses and businesses servicing the rural sector such as my own and will have an adverse impact on rural schools, medical services or any rural institution dependant on NBN satellite broadband services for their Internet. We don’t download movies or games — it’s all business  usage. We average between 75 to 90 Gb per month, mostly during the day-time when parents are at work and kids at school so there is no way our usage impacts service quality for other NBN satellite users.”

The letter our tipster received from ISP SkyMesh includes some thinly veiled criticism of the NBN Co:

“We know our plans have been drastically reduced, perhaps even more than you might consider necessary. However, under NBN Co’s rules, they genuinely are the largest Plans we can offer. We are not able to offer Plans with Normal Data Allowances anywhere near 50 GB, even if you ask nicely.We apologise for the inconvenience this has caused, but NBN Co is confident that you will see an improvement in the performance of your NBN Interim Satellite Service as they enforce the Fair Use Policy for all RSPs.”

The five-month delay to the NBN’s dedicated satellites will be felt hard by people in the country.

Submitting to the will of the party. Liberal MLC Peter Phelps has begun a self-imposed ban on Twitter in the 50 days before the New South Wales election. In a press release this morning the government whip in the NSW upper house said that he would not be posting any more electronic graffitti on the social media platform, where he is usually prolific and candid. Phelps said he hadn’t been asked to get off Twitter, and it hadn’t been suggested to him, but he compared his dedication to his party to the ridiculous book 50 Shades of Grey:

“Just as Anastasia gave herself up without reservation to Christian, now is the time that the Whip willingly submits to the sweet sting of Liberal message discipline for the next seven weeks”

So that’s a terrifying mental image, that we’re sorry/not sorry about sharing with you all.

NSW election heats up. We hear from a tipster that the NSW branch of the Liberal Party has celebrated the countdown to the election by asking for money — even from people who have contacted them to complain. The NSW Liberal Party, which received more than $7 million in 2013-2014 disclosure period, is telling supporters that they need their money because “Recently, The Australian reported that Labor is going to double up on campaign spending because of big union donations”. With only 50 days to go we’d love to hear what kind of correspondence our NSW tipsters are receiving from their local candidates, we can only hope they are as colourful as those Queenslanders and Victorians were treated to. Let us know here.

Homelessness groups ask for certainty. It’s a tough day to try to draw attention to actual policies instead of personalities, but we’re trying all the same. The heads of almost 60 homelessness groups have written a joint letter to Social Services Minister Scott Morrison asking for the government to commit to funding homelessness services over a four-year cycle instead of the current 12-month agreements, taking out an advertisement in today’s Australian.

“We cannot negotiate with our staff whose contracts soon expire. We cannot tell clients that the programs they have relied on will continue. We must carefully deliberate whether to accept new clients into those programs that have a long-term delivery model.”

We reported on social services groups finding out their funding was cut right before Christmas last year — looks like it’s not getting any easier for the sector to plan for the future. 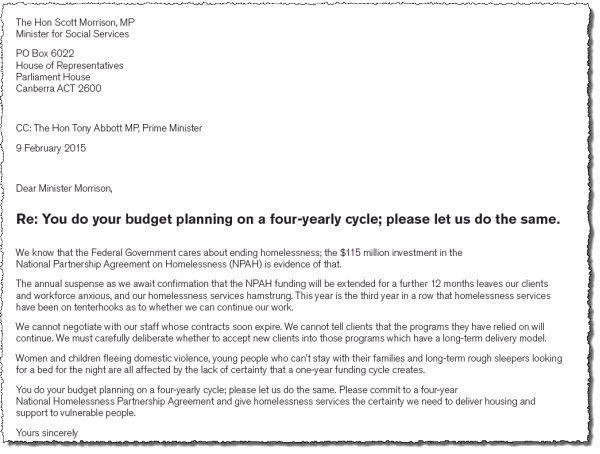 Taxman calling. This time last year we heard the Tax Office was sending letters to people who had missed submitting a tax return since 2000, threatening fines for the non-lodgement of returns. We’re hearing that the ATO is at it again this year:

“They have sent over 500,000 letters with a direction internally to scare people into lodging and paying more money I know of eight people who have received letter all in early February 2015 at the same time. The tax office obviously had success last year and thought they would try again on 2015 with the same scare campaign.”

Have you received a letter from the tax office telling you to pay up? Advice on how to handle it is here.

Job with no applicants. This advertisement appeared on NowHiring.com.au over the weekend, inviting applications for the position of prime minister of Australia. While it now looks like the position isn’t vacant (for the moment), we do like their opening questions for candidates: 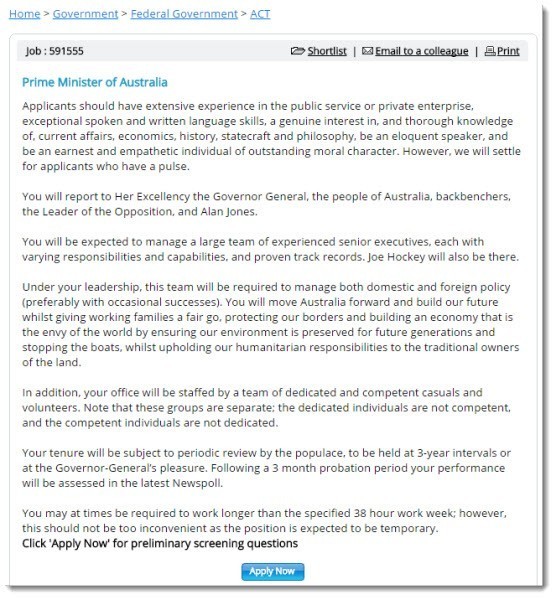 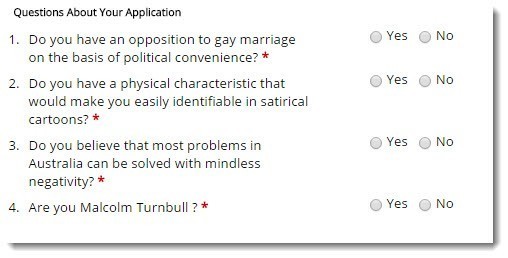 Stopping boats and bribes. While the PM tells us that the government has successfully stopped the boats, we hear from a tipster in Indonesia that the flow-on effects have been felt by people smugglers:

“I was in Bali recently — plenty of expat Aussies with interesting stories. They said Indonesia’s Police Force and friends are very upset with Tony’s ‘stop the boats’ as the ‘people smuggling’ industry is worth an estimated A$250m to Indonesians –mostly consisting of bribes, food & rent etc — refugees are making some Indonesians seriously rich — and given people need to pay off the Police, a large chunk of that A$250m goes to various levels in the police/army in a kind of pyramid scheme of payments. Stopping the boats also stops the bribes.”

Missing in action in NSW. It’s not often that politicians miss a chance to don a hi-vis vest and hard hat while digging holes in the ground, but a tipster pointed out a few notable absences at the launch of the NorthConnex tunnel in Sydney last week:

“You’d think that the self-proclaimed Infrastructure PM and Premier would want to be at the sod turning ceremony to mark the start of construction of Australia’s largest road tunnel — the NorthConnex. But instead it appears that the ceremony was hastily brought forward a couple of days when the NSW government found out that a local community group that was against locating the stacks and portals in the middle of Wahroonga’s residential and educational precincts, had planned a demonstration for the sod turning ceremony. Instead of the ‘Captains of Australia and NSW’ at the sod turning celebration, there was a strange selection of second tier pollies (including Paul Fletcher and Philip Ruddock) who looked like they were digging a grave (maybe they were burying the Liberal Party’s second-term hopes). Also conspicuous by his absence was local state member and wine buff Bazza O’Farrell. Given his ambition to be the next member for Berowra, it was surprising he was not there as he had a ready-made grave to bury Philip Ruddock in.”

Taxman calling – how does,what on the face of your comments looks like a legitimate move by the ATO to follow up persons who don’t seem to have lodged tax returns for years, amount to an attempt to “scare people into lodging and paying more money’?
Is Crikey now on the side of tax dodgers?

Taxman calling – how does,what on the face of your comments looks like a legitimate move by the ATO to follow up persons who don’t seem to have lodged tax returns for years, amount to an attempt to “scare people into lodging and paying more money’?
Is Crikey now on the side of tax dodgers?