Rundle: Abbott has been unmasked, and so has the batty Right

Abbott has survived, but his party has no idea what it is anymore. 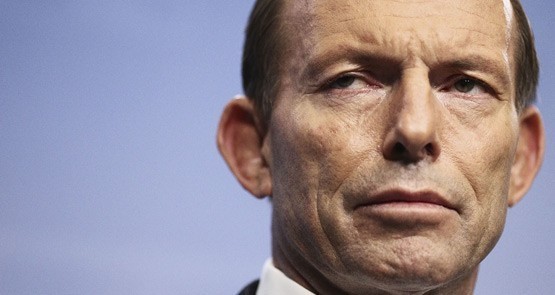 Rejoice! He lives! Anthony John Abbott emerged from the lions’ den/Sanhedrin/tomb this morning, his side speared, but still otherwise intact. Earlier in the morning, at the church service before the opening of Parliament, Abbott looked like he might not make it to the meeting at all, skin drawn, jaw clenched, a man with only an hour or two separating him from one of the great humiliations of all time. More than that — the failure of his whole life, focused as it had been on achieving the premiership, since childhood. This was a man with a hymn sheet in front of him, standing on the edge of the abyss. He still is, of course, as m’colleague Keane details here.

Whatever happens in the party, and everyone, Left and Right, assumes that we will only have the pleasure of Abbott’s company for another few months, the chaos in the wider circles of the Right cannot be underestimated. In the past 18 months, they have seen their entire electoral/ideological model collapse. The Right had hoped that they could tap into conservative notions of minimal governance — “no surprises” — as expressed in Chris Kenny’s deeply embarrassing and unctuous depiction of PM Abbott as “the maestro”, calming the orchestra. By thus transforming the relationship between government, media and public, they would present Labor as alien to the Australian tradition, and once again tap into the “natural party of government” stance.

The trouble is, they aren’t. The mainstream Left and Right are now asymmetrical. A centre-left progressivism, combining a strong market and consumerism emphasis, with a steady extension of liberal equality into areas of gender, race and sexuality, fit together perfectly, and can then be supplemented by a welfare safety net and some limited universal service provision. For 200 years, capitalism has sat easily with racism, sexism and other forms of oppression — but there was no necessary relationship, and once an expanded market began to circulate the idea of “equivalence”, liberalism vastly expanded its reach. Same-sex marriage has gone from curiosity to inevitability in a decade-and-a-half not solely (or even largely) because of campaigns around it, but because life has become so dominated by the blind contracts of the market that a lot of people can’t even remember what living in a culture of particularity — one where you could say that an institution like marriage is incommensurable, there is nothing else like it, it is how nature and culture are bound together — was actually like. You can say that also for dozens of other causes (there is a counter-movement to that, which I’ll discuss at another time).

That gives a centre-left party a very strong base from which to work: a philosophy simply expressed, but with endless ramifications, and strongly felt by the rising classes who will fill the spaces that dying and diminishing classes vacate. Thus did Daniel Andrews become the first leader to go on a Pride march for more than a decade — and that is suddenly no real big deal. Using that model — that they represent obvious, common-sense modernity — centre-left parties have the possibility of political domination, if they can also acquire a genuine purposiveness and a program of life-betterment.

Centre-right parties can’t. They’re a junk shop of old obsessions, ideological spare parts and nostalgia items. The social conservatism-economic liberalism model that underpinned Thatcher and Howard has stopped working entirely. But different parts of the Right can’t agree on which bits to throw out and which bits to keep. So they’re all over the place. The weird effect is that the sanest Rightist on one thing is utterly mad about something else. Thus the only conservative who says that climate change is real and should obviously be fought is … batty Bill Heffernan. Nick Minchin is liberal on matters of sexuality, etc, but hugs to himself the idea of a warmist Communist conspiracy because it’s necessary to his identity. And so on.

You can’t make a movement out of that, and that’s why there has been no movement by the Abbott government. It is a body without organs, nothing works together, and in dealing with this great crisis they elected the most nostalgic, Heath-Robinson-esque conservative of all, as a sort of backstop against modernisation. But they didn’t really understand just how conservative he was. Like Evelyn Waugh, who said that he didn’t want to take things back to the Middle Ages — 300 AD was more the idea — people really couldn’t comprehend the secret reserves of Abbott’s political fantasies. They still can’t, which is why a stunning misinterpretation of who Tony Abbott really is — Katharine Murphy’s claim the 2013 Tony Abbott is dead — can gain such approval. Abbott has been wearing a mask for a long time, desperate to make it into power, and fulfil the destiny outlined for him in his childhood. What you’re seeing now is the real Abbott, a sort of jump-cut reel of reactionary obsessions of modernity. Knighting Prince Philip is restoring the proper order of the Commonwealth, which can only be bound together by pre-modern forms (i.e. royalty, honours and due deference). Paid parental leave may be a smart move for the Right, borrowed from Scandinavia, but it’s also a palatable modern form of clerical-Right familialist policies, straight out of Franco and Mussolini, by way of B.A. Santamaria.

Yes, Tony Abbott is personally erratic, tormented, full of seething anger he can barely control, disjunctive in relation to everyday reality, but his core politics are the furthest Right that any head of the Liberal Party has been — and the Right within the Liberal Party could only hold the line by choosing that personage. When Turnbull gets the leadership, the party will be decomposed and recomposed. It will be a civil war, of more consequence to the party than the actual 2016 election. Power comes and goes, but the organic unity of a given party can only be lost once. But there is no other choice. Going to the conservative Right is a death march, to pitch your tent in the thirst-lands of fading social classes.

Thus the pathetic cockie who suggested that Abbott come out to Grong Grong to see the real Australia was inviting Abbott to a town that has lost a third of its population (600 down to 400) in 15 years. It’s a Potemkin village on life support, and the taxes that keep it connected to an ambulance service, a hospital, a water supply are provided by two latte-sipping cafe dwellers crunching out a business plan to get in more Indian students (wheat: $6 billion in export earnings. Education services: $14 billion ). The Liberal Party is going to have to purge, move to the centre-right if it’s going to survive. The last 18 months have shown what is required to keep it alive in its current form: a propaganda drive by Murdoch, disarray of Labor, and the Greens drawing Labor further leftward (more power to their arm!) than could subsequently be sold back to the electorate. That’s the difference between the Labor chaos and the Libs — and why both PM change-overs were many times smoother than this disaster, even with the loose cannons charging across the deck. And also why, after knifing Rudd, Labor ran the most legislatively and programmatically successful short-term government of a generation. The reason Abbott is dead to the public now is because he had no choice but to agree with most of Labor’s program as a way to get in. Flouting that contract has killed him. And the government. And probably pitched the party into a deep crisis it could otherwise have avoided. This is Gillard’s revenge, and it ain’t over yet. The conservative commentariat have removed all possibility of being a genuinely critical voice on the Right. They’re simply peddling a bunch of the old fantasies, repolished as new truths, like a bunch of old Stalinist poets who can’t adjust to the new order.

Best of all we get to watch this play out, at every level over the next few months. It would take a supple political genius to negotiate these narrows. And Anthony John Abbott ain’t no genius, no messiah. He’s just … Well, even the resurrection only lasted three days.

Rundle: the fire-breathing Catholic warrior comes unstuck, as we always knew he would

Thanks Guy. The flensing of Abbott is a bit like a Renaissance anatomy lesson: using to corpses of the executed to reveal the workings of the Rightist body politic.

“Pantsed”- and even the budgies have flown the coup?

I agree with Guy agreeing with my comments on his last piece.

But the reasons for Labor now being the Natural Party of Government are even firmer than even ideology: The Coalition over-60s base is dying, giving Labor 55% by default in 2018-2020

By choosing Abbott as their leader the LNP have doubled down on their demographic disaster.

Read it and weep Tories!

Excellent Guy; I look forward to the next budget and see who the Cap’n and his motley crew set out the screw. The LNP cannot help themselves and they will again hit the under-priviledged, public servants (incl ABC) and welfare recipients.
This time the media will be looking at every mistake, miscall and miss management then it is adios.