The Hazelwood mine fire was not a natural disaster; it was a chronic industrial mishap of the most unnatural kind, writes freelance writer Tom Doig. This morning, everyone is obsessed with the Liberal Party’s leadership spill — and fair enough. But exactly one year ago today, on the afternoon of February 9, 2014, a very different kind of spill was taking place in Victoria’s Latrobe Valley, right next to the town of Morwell.

The Latrobe Valley “spill” was a massive, prolonged discharge of toxic smoke into the air breathed by a densely populated regional community.

It was the result of a fire in the Hazelwood open-cut coal mine, a fire that burned for 45 days before finally being declared “safe”. Although the mine fire is thought to have been started by embers from a nearby bushfire, the month-and-a-half-long blaze at Hazelwood was not a natural disaster; it was a chronic industrial mishap of the most unnatural kind.

According to Emergency Services Commissioner Craig Lapsley, there was a fundamental problem with mine operator GDF SUEZ’s risk-assessment strategy, which focused on “risk mitigation” — reducing the likelihood of a disaster happening — but did not adequately consider the “consequences” of actual disasters, should they occur.

“The weakness in [GDF SUEZ’s] risk and mitigation strategy was that it was about the power generation, and not necessarily about how close the mine was to a community — and, if you had an ongoing fire, what that would do to that community,” Lapsley said.

Lapsley agreed that this “massive blind spot” regarding the actual consequences of disasters was shared by the emergency services.

While media coverage of the fire’s impacts has mostly focused on Morwell, the carcinogenic airborne “spill” also affected the neighbouring towns of Traralgon, Moe, Newborough and Churchill, as well as the farms in between — in total, more than 70,000 people living within 20 kilometres of the mine.

According to the Environmental Protection Agency, the fire was “a world’s first in terms of prolonged adverse air quality“. Environment Victoria described the smoke as “possibly the worst incident of environmental pollution in our state’s history“.

“My analysis showed there’s an 89% probability that there was an increased risk of death [during February and March 2014],” Barnett said. Barnett found there was a 15% increase in deaths, which translates to 11 extra deaths across the four postcodes.

Earlier today, Barnett announced that updated figures from Births, Deaths and Marriages Victoria show there is now 94% certainty that an increase in deaths occurred in Traralgon during the mine fire.

The Department of Health has questioned Barnett’s findings and emphasised that the death rate in Morwell actually declined by 19% in February and March 2014 — which equates to a drop of five deaths. However, the Department of Health has not attempted to explain or contextualise this statistically significant deviation. (For example, one potentially important factor is that approximately 6000 of Morwell’s 14,000 residents temporarily moved away from Morwell when the smoke was at its worst.)

Meanwhile, the department’s own analysis of mortality rates in Moe and Newborough suggests that “[t]here were increases of 32% and 33% in the deaths for these two time periods [February and March, 2014]”. In real terms, that’s approximately 10 extra deaths.

Although the Department of Health has contracted Monash University to undertake a long-term health study on the effects of the mine fire, at present this study will only examine residents of Morwell — not people from adjacent towns such as Moe, Newborough or Traralgon. Based on the death statistics above, this seems like a significant and concerning shortcoming.

Meanwhile, in “the Valley”, life goes on. Coal ash with higher-than-recommended levels of aluminium, barium, chromium, iron, strontium and titanium lies in a thin layer in most of the roof spaces of Morwell, as well as many of the ducted heating units. Despite this, the Latrobe City Council and the Department of Health consider the clean-up “complete”.

On this day of many “spills”, it’s worth reflecting on one of Tony Abbott’s choicest soundbites from last year: “Coal is good for humanity.”

*Tom Doig is a writer and editor. His new book about the Hazelwood mine fire, The Coal Face, will be published by Penguin Australia on March 25, 2015. 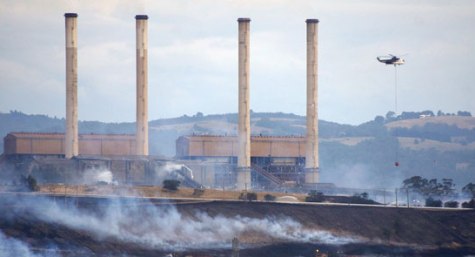 Tom, how would you compare the risks associated with the Morewell smoke with those of Fukushima radiation? Keep in mind that millions of people actually cook with coal every day and have done for centuries. And in recent times there have been epidemiological studies on such exposures. There are two very different issues: how dangerous is coal smoke at a given level for respiratory disease and how carcinogenic is it? Have you looked at the studies?

@Geoff – I’m certainly not enough of an expert to compare the risks associated with the Hazelwood fire and the Fukushima disaster (although I’m certainly glad I wasn’t anywhere near either incident); but there are millions of deaths every year attributed to fumes from cooking fuel sources. The World Health Organisation put the figure at 4.3million for indoor stoves in 2012:

After analysing the risk factors and taking into account revisions in methodology, WHO estimates indoor air pollution was linked to 4.3 million deaths in 2012 in households cooking over coal, wood and biomass stoves. The new estimate is explained by better information about pollution exposures among the estimated 2.9 billion people living in homes using wood, coal or dung as their primary cooking fuel, as well as evidence about air pollution’s role in the development of cardiovascular and respiratory diseases, and cancers.

In the case of outdoor air pollution, WHO estimates there were 3.7 million deaths in 2012 from urban and rural sources worldwide.

Many people are exposed to both indoor and outdoor air pollution. Due to this overlap, mortality attributed to the two sources cannot simply be added together, hence the total estimate of around 7 million deaths in 2012.

Is IkaInk=Tom? No matter. Nice to see you found the smoke problems. And the radiation deaths from Fukushima? I think its still zero and that’s probably where it will remain. Even without evacuation it would be zero. This isn’t a guess, it’s just based on well known information about radiation. Nobody got a deadly dose. If there was no evacuation then the 100,000 plus people would have had 20,000 cancers anyway. Would they have got more? Possibly a few, but certainly not many. On the other hand the evacuation killed many, and the ongoing despair and displacement has had massive impacts.

The bottom line is that Morewell was a far more dangerous event than Fukushima … the levels of smoke that can trigger asthma attacks and the like is more dangerous than small amounts of radiation … but compare the media coverage of the two events? That would make an interesting master’s thesis!

N.B. If they’d have evacuated the Fukushima people to the US, then instead of 20,000 cancers, they’d have had a LOT more. They’d have adopted US habits over time and their cancer rate would have risen by about 50 percent. Same in Australia.

Bottom line? The risks at Morewell probably not as bad as the risks of high levels of junk food.

Don’t be daft Tom. Uncle Tony has told us coal is natural and good for society. Isn’t that enough to re-assure you?