The education business not netting News Corp the big bucks. And other media tidbits of the day.

Amplify subdued. No wonder big shareholders (not the Murdochs) and a growing number of analysts want the Murdochs to ease the under-performing newspapers out of News Corp and shut down the loss-making embarrassment that is the education business called Amplify. Friday’s teleconference to discuss the December quarter’s results heard two analysts question the performance of the newspapers and the Amplify business and ask if management was considering a capital return. But on Friday night, in a filing with the US Securities and Exchange Commission, News Corp revealed that the newspapers, and especially Amplify, remain the most at-risk businesses in the company.

What is interesting about the latest statement is the break up. Amplify reported a smaller loss, and management said on the teleconference they expected the business to cut its losses over the rest of the year. But its future remains uncertain and now there’s a quantified impairment charge hanging over it.

The US$1.4 billion impairment charge hanging over the News and Information business will increase the pressure on directors to do something. That pressure is likely to continue from the market (Credit Suisse reckons there are hundreds of millions of dollars in extra value in spinning out the newspapers and or shifting Amplify). The newspapers did better in the December quarter in the US where Dow Jones ad revenues rose. In Australia, there was a fall in ad revenues, though certainly not as bad as the big falls seen in the 2012-13 and 2013-14 financial years when the falls in revenues were measured in the hundreds of millions of dollars.

And despite claims to the contrary about how well The Times in London was going and the way The Sun’s paywall was attracting more and more subscribers (225,000 and rising, according to CEO, Robert Thomson), there are concerns about the UK papers. The big worry was a 16% fall in advertising (in local currency) in the quarter. Overall revenues were down 7% for the quarter. Ad spending with the company fell US$30 million in the quarter, which was most of the US$38 million fall for the six months to the end of December. If that doesn’t reserve in the current half, it will require action in the UK. — Glenn Dyer

Sharren misses the point. Of course Sharri Markson and Darren “Lurch” Davidson dined out on Gina Rinehart’s noisy exit from the Fairfax Media share register on Friday night — and they did so with unconscious irony (which is one of their most endearing features). In the second to two columns about Gina Rinehart this morning in The Australian’s Media section, our dismal duo took the usual jabs at Fairfax Media and its management claiming the Rinehart sale had left it exposed and “vulnerable” and how her “sellout sends a clear rebuke to the board”.

Hmmm, Sharri and Lurch seem to have missed a rather important development last week. They should slow down and smell the roses. Now, who sold out of their employer (News Corp) in 2014, without telling anyone, including the board until late last week? Why, News Corp’s second biggest shareholder, Saudi Prince Al-Waleed bin Talal, who sold down his long time 6.6% holding in News’ voting shares to just 1%. Now if that isn’t sending “a clear rebuke to the board” I don’t know what is, except in the curious world that is the Murdoch clan culture and The Australian’s Media section. Naturally, there was not a word about that significant change this morning.

And while still on this morning’s jottings of Sharri and Davidson, good to see them playing catch-up and claiming that the fall in the Seven West Media share price meant the Seven West Media share price was sending us a message, which could see some impairment losses forced on the company. “Diary can reveal,” the item started breathlessly to retail what Crikey had written on three occasions in the past month. The item also mentioned the sharp fall of the Nine share price, which Crikey has also pointed out on several occasions in the past month (and in late December was well). Sharri and Lurch are slow-moving and slow-thinking creatures at best — so it’s no wonder they missed the 19.4% jump in the Seven West Media shares — from the low of $1.21 reached in January to the close on Friday of $1.45, a rather large rise of 24 cents. — Glenn Dyer

Front page of the day. The Courier-Mail called it. Shorten’s camp would have been worried Abbott would go but this is a good outcome for them … 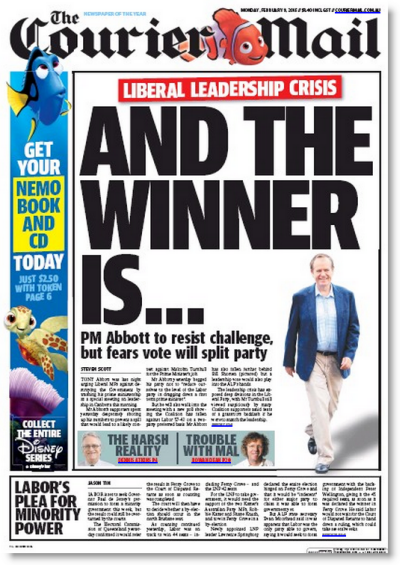